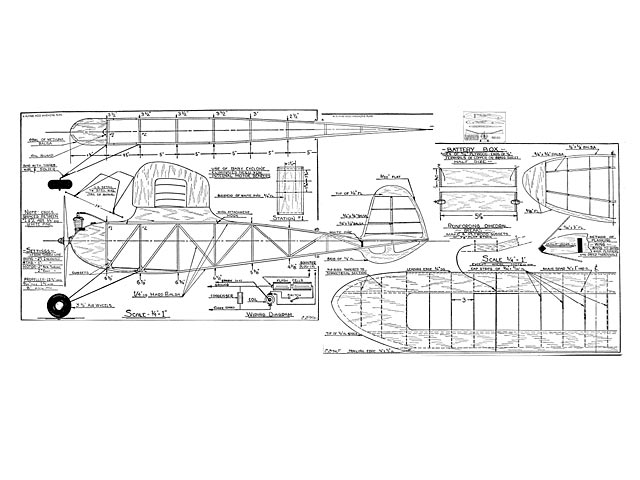 Yes, it happens at every gas meet! Some rubber model builder, anxious to try his hand at building a gas job, enviously eyes the slick super-ship of an ace petroleer and turns away with a sigh. And he says sadly to himself, Boy, she's a beaut! But she's too tough a task for me to tackle! There's no need for shedding real tears in such a case, however. For here's a model designed expressly for the lad who's just going into the gas game - the 'Kayo,' a power plane that has looks and speed, yet is ridiculously easy to build. Look 'er over - and then start to work!

0UR Kayo power job results from the combined efforts of a number of builders to produce a gas model that could easily and cheaply be built by beginners, yet which would compare favorably with the so-called 'super' gas jobs. And now that it is completed, we have no hesitation in recommending Kayo as an ideal gas model both for beginners and even more experienced victims of modelers' gas-itis. That the job can inexpensively be built will be apparent after the reader has checked the bill of materials at the end of the article.

Streamlining is secured in the model in a manner that eliminates the need for seemingly endless hours spent on a complicated elliptical surface. And semi-planking the wing not only gives great strength, but it also provides practice that will prove of value when the modeler tries his hand at more difficult jobs.

The high lift, high thrust line, low center of gravity, well forward landing gear, and the long tail moment arm, all combine to give stability both on the ground and in the air. And there's no need for carrying extra props around when a lad is flying his Kayo, because it's almost impossible for the prop on the ship to strike the ground.

Kayo's flying qualities are as nearly perfect as pos-sible. So good are they, in fact, that the original model disappeared from sight after 7 min 41 sec on a 30-second engine run. And that epic flight, incidentally, was only Kayo's sixth!

Fuselage and Wing. Before starting construction, scale up the model's plan to full size on a large sheet of paper. White wrapping paper will serve the purpose admirably. Make the drawing carefully to evade possible constructional difficulties.

The fuselage is very simple. Follow the plans closely in building it, however. Use hard gas model balsa 3/4 in square. Cement all joints thoroughly, and where each cross-brace meets the longerons drive a 1/2 in copper brad. The rest of the fuselage plans, including those for the landing gear, are self explanatory.

For the wing, make a template of tin or wood of the full-size rib (Plate 1) and cut 18 ribs from 3/32 in medium balsa. Next, lay out the spars on a large flat surface and cement the ribs accurately in position, using pins to hold them until thoroughly dry..." 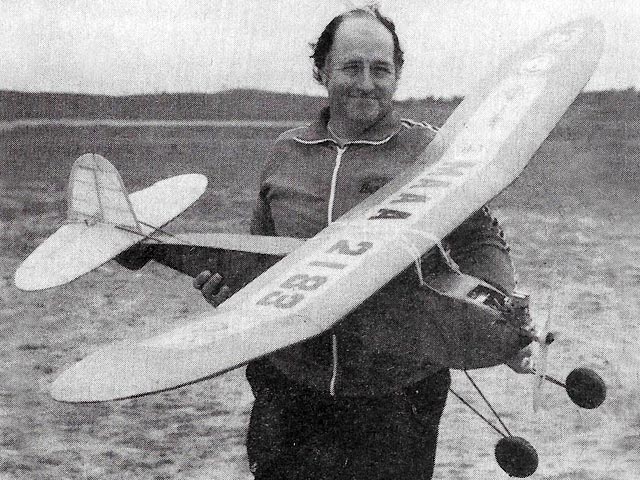