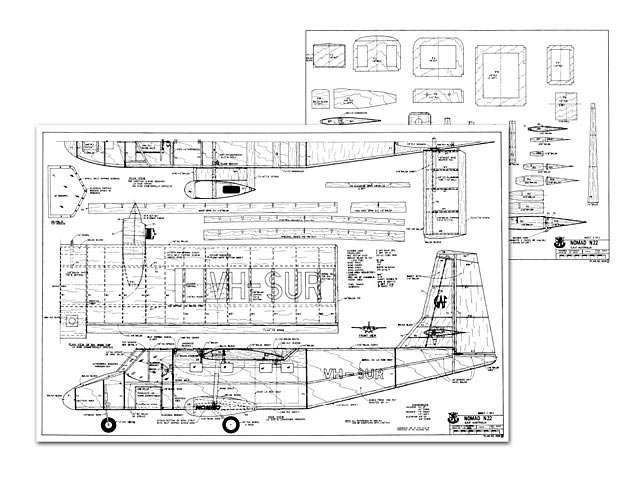 Quote: "There is something fascinating about a twin-engined aircraft, especially when you hear those two synchronized motors humming away. The multi-engine bug thus having bit and stayed, I put away my old De Havilland DH-2 and commenced to flip away through my six-year collection of R/C Modeler Magazine, looking for suitable subjects, hints and theories. My conclusion from my study was that I needed a semi-scale subject, with a large rudder to overcome engine failure, motors with out-thrust, a simple and quickly built structure, a wing loading around 26 oz/sq ft, a high wing, a reasonably long nose for balance of the Center of Gravity. My imagination was now diverted to a recently developed aircraft call the Nomad, which filled most of my requirements.

The first Nomad flew in 1971, and the second VH-SUR flew for all to see at Farnborough in September 1972. The Nomad is a wholly native product of Australia, and is just now entering the first stages of production at the Australian Government Aircraft Factories, with final assembly taking place about five miles from my home.

The Nomad falls somewhere between a DHC Twin Otter and the Britten-Norman Islander, and was designed with the philosophy of simplicity of structure and systems, flexibility of loading and internal layout to exploit the full load capability for STOL performance from rough fields.

The most interesting feature about the whole design is the high lift system which consists of a full span wide-chord double slotted flap installation, in association with a specially developed leading edge design to allow maximum exploitation of the flap capabilities. The lateral control system uses the rear outer section of the double slotted flap as a conventional aerodynamically balanced aileron when flaps are retracted for cruise flight. As the flaps are extended, a mixing mechanism in the control circuit progressively transfers control motions from the trailing edge ailerons to a 'slot-lip' aileron so that, as full flap extension is approached, the cruise aileron becomes stationary and acts only as a flap, lateral control being achieved by the highly effective slot-lip surface.

Due to the full span flaps, the Nomad has a fairly small wing area in relation to its overall size. Originally, I tried a scale wing area but, without the scale flaps, the wing loading was too high. I therefore increased the chord to give a light wing loading and used a Clark Y section for ease of construction. I flew the model for some time with inverted engines and flaperons. However, with such a light wing loading, I concluded that the flaperons were rather redundant and were also dangerous to use. If full flap of about 30° was given without full up trim, the model would instantly nose-dive straight for the ground with shattering results! The inverted motors were easily flooded and produced a lot of vibration, even to the extent of breaking off aileron hinges. Hence, after an unfortunate mishap that required extensive rebuilding, I left out the flaps and turned the motors on their sides. This has extensively reduced the vibration and enhanced engine starting, but has raised the carburetor centerline above that of the tank. I therefore pressurized the tanks from their respective mufflers to compensate for this condition.

The resulting craft, as now appearing in this article, exceeds my aims in that it is semi-scale, quick and easy to build, a basic trainer for twin engines, is easy to fly, has plenty of power, and glides extremely well. The best advantage of all is that if one motor fails when on full power, all that is required, when inexperienced, is to quickly close down the other motor and glide down to a safe landing. With experience, the Nomad can be flown on one motor at about 3/4 throttle setting. For the novelty, I added a bomb compartment under the cockpit, a great gimmick for those flying demonstrations!

Construction is fairly basic and, as you are at least past the novice stage, I will only emphasize the important details.

The fuselage is basically simple and is constructed mainly from 1mm (1/32 in) ply to not only save a few dollars over the balsa, but because it makes a good, strong, and simple fuselage. Care should be taken in aligning the hole for the stab pivot. After sheeting the rudder post, reinforce the area of the pivot with 1mm ply and then drill the 3/8 in holes. Using the 3/8 diameter aluminum tube, check the holes for alignment to the wing saddle. If there is any misalignment, file out the hole until the tube sits correctly..." 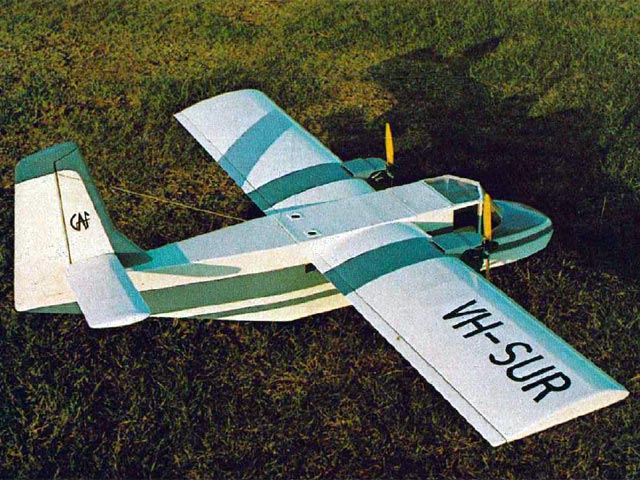 This is a model of one of the prototype Nomads with the single mainwheel. Production Nomads had twin mainwheels each side, similar to the nosewheel in size. For what it was, it did a magnificent job in Australian military service, it had a lovely differential flap/aileron and spoiler setup. Coupled with the reverse pitch prop on the baby Allison 250 series B17 turbine engines had a not too shabby STOL performance, but could never match the Army Pilatus Porter in the STOL role. A number of Army pilots were critical of the Nomad and wanted a more capable aircraft, despite Army never losing one pilot to a Nomad incident. The aircraft that replaced it, The Beech King Air, went to Air Force when Army became a fully rotary wing fleet.
Marty - 28/02/2015
Attached pictures on my Nomad [005,006]. Scaled down to 67% and converted to electric power. More info on my webpage see http://www.tomasdunker.se/modell/mflyg...
TomasD - 04/09/2020
My website is closed (the link above no longer works) but a movie of my model is available on YouTube https://youtu.be/jP4mzLHsxpc
Tomas Dunker - 26/10/2020
Add a comment