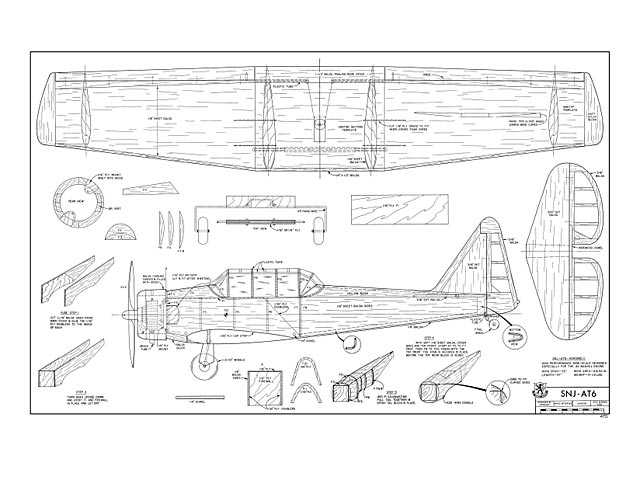 Quote: "AT-6 SNJ by Bryce Petersen. A semi-scale version of the North American Harvard II designed for the Graupner/OS Wankel engine. Pattern performance on a .29 to .40.

Hello, again, It has been some time since I could join you with a model project. The opportunity presented itself to start a new club here in West Virginia, so I have spent a year or so plunging into the various chores of club activities and training new members. Membership is up to 30 proud, dues-paying members with five competent instructors with 'ready thumbs' to help the beginners. This year's election produced eager, new faces and I was allowed to settle back into the background and design models again. We are known as the Mountaineers of Charleston, West Virginia, and all of us extend the invitation to come fly with us.

AT-6 SNJ North American Harvard II. This aircraft needs no introduction to aviation-minded persons. It was the basic trainer for the Army and Navy, produced after the second World War because of its excellent handling characteristics for training. It was first ordered in 1938 by the RAF. The popularity of the Harvard [1 soon spread to the U.S. and over ten thou-sand were produced in the U.S. and Canada. The design possesses the dis-tinction of having been manufactured in larger quantities than any other basic trainer.

The model presented here is a semi-scale SNJ. It is close enough for stand-off scale events and actually won first place this spring at a contest. The head judge suggested I add instruments and rescale the ailerons for more points, however.

The real plus for this model is its ability in the air. The power, drag, and wing loading ratio is close to perfect. The first few flights were a thrill for me, l found myself doing things that are normally difficult for me. For example, I can pull the stick back, and it will do a round loop. With a touch of down trim, you can roll it upside down and it just stays there. Slow it down and point its big nose up into a stall and plop, straightforward to recovery. I went charging into an eight point roll and to my surprise, l did it. I am so impressed with its flight characteristics I plan to enter it in pattern next month. For a 030 powered scale model that brings the 'oohsh and 'aahs' on the flight line, then flies like it does, I am quite proud of this one.

It has been amazing to me how much trouble some designers go to designing scale models. Why do they make things so difficult to construct? The average modeler is interested in a model that is realistic and flies well. l looked at some of the all-balsa scale models at Toledo this year, and I wonder how many of these kits will be completed and flown by the builder. I believe the modelers of the near future will demand scale appearance even in the beginner-trainer kits.

The model presented here was designed for flight performance first and scale appearance second. Construction is as simple as the average slab side square-tipped monster, but in my opinion, it looks like a real airplane. In order to transmit the construction techniques that I think are easy for the prospective builder, I have added key photographs to answer questions the plans fail to show. I have found that it is almost impossible to communicate with drawings, little ideas that are so easy for the experienced builder and seem to confuse the beginners.

Let us start construction by cutting two fuselage sides from a good grade of medium hard 1/8 in balsa. Lay them on a flat table and trace your 1/32 in plywood doublers. Epoxy the doublers to the insides, Cut two hard-wood dowels to length and the 1/16 in plywood center section (F1) that extends into the cockpit area. This extension forms a base for mounting a pilot in the cockpit area. Cut the 1/4 in plywood firewall and sand all rough edges smooth.

On a flat table, turn the fuselage sides upside down and slide the two dowels in place. Slide F1 in place and add the firewall. This will form a box-like structure and every-thing should fit squarely. Epoxy these parts together except for the dowels. The latter are epoxied after the 1/16 in sheet sides are in place. Draw a straight line on your work table and a center line on the fuselage... " 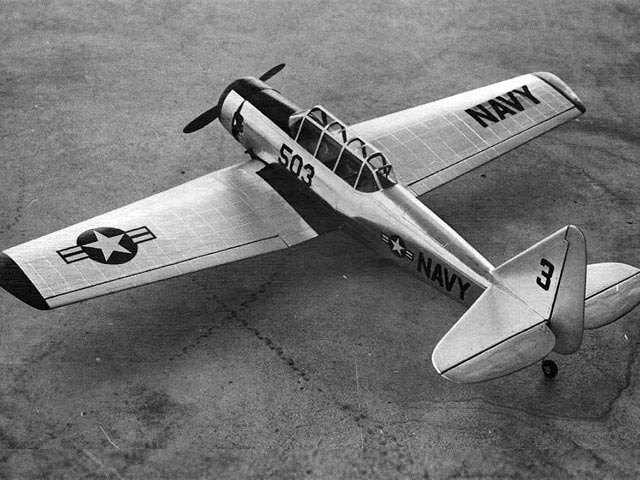 I bought my Dad a 0.40 Wankle Rotary model engine for his birthday in 1970. He scratch built this plane, including drawing up his own plans off the little plans in RCM (He was a Sr. Design Engineer for Goodyear Aerospace) and we let the club pro test fly it. The 1972 vintage airplane will be flying again in 2015, now with an E-flite Power 46! Keep up the good work!
Thomas - 25/02/2015
Steve: Most every Sunday morning in the late '40s, Bryce would wake me up running his engines - South Hills, Charleston WV. Bryce had a lot plans published, IMHO his best plan was the C-45 Twin.
AllenHunt - 02/03/2015
I have a kit for this plane AT-6 Texan. It states on the box: Design by Bryce Peterson, Aero Precision, Collins Industry Inc., 322 North East St, Tipton, Indiana, 46072. I would like to know what year this kit was made. I have built it but not flown it yet. Any info would be great. I have searched the net but to no avail. Thank you,
WayneMeyer - 09/02/2018
An answer for Wayne: this Bryce Petersen design was published in R/C Modeler Magazine, September 1971, plan #407. The kit would have been available around that time too. Sometimes the kit announcement coincided with the plan publication.
Rudy - 09/02/2018
Here are a few photos [more pics 006-011]. I'm using a Turnigy 32 electric for power instead of gas. Hope it has enough power.
WayneMeyer - 20/01/2020
Add a comment