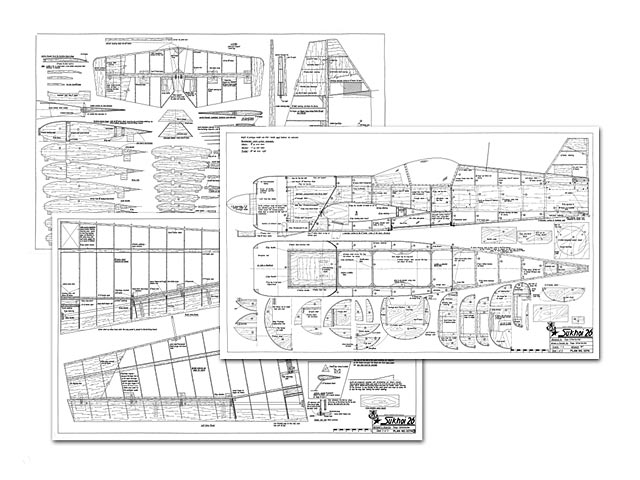 When the Sukhoi 26 first appeared at the 1984 World Aerobatic Championship it created a lot of interest, from both spectators and competitors alike. Sitting there among all the other acrobatic machines, this new Russian aeroplane seemed to look out of place. With its short wingspan and low drag canopy, the aeroplane looked more like a racer of the 30's than a contemporary aerobatic design. As was the case with all earlier Russian aerobatic designs of the past, power came from a well-proven, powerful radial engine, said to produce 350 hp. One startling fact about the Sukhoi was its design origin; the company was only known for its jet fighter design.

A closer look at the aeroplane revealed the use of composite materials on the fuselage; the wings and tailplane being ply covered foam. Nobody was very impressed with the quality of construction or craftsmanship. In this regard the Sukhoi looked worse than anything the Russians entered before (keep in mind that craftsmanship was never one of their strong points). It must be pointed out, however, that the two Sukhois' entered were really prototypes; today's aeroplanes are much better. Of course, all of this is of no consequence if the machine outperforms the competition.

Although the Sukhoi was better than the older Yak-55 it became clear after the first round of flying that the new aeroplane was no world beater. The problem was its weight - the aeroplane stalling readily when pulled too tightly. It was also sadly lacking in vertical performance. There was not much praise from anyone. Some observers went as far as to say that the whole Sukhoi program was not worth the effort of further development. Only the Russians never doubted their design and went home to refine the aeroplane.

When the new Sukhoi 26M appeared at the 1986 championships in England it immediately became apparent that here was the aeroplane to beat. Its performance was now simply breathtaking and spectacular; the pilot the only limiting factor. Vertical performance was the problem before, now the aeroplane would climb like nothing ever seen in acrobatic competition. To achieve all this, the engine was given some special attention and there were rumors of 500 plus horsepower. Of course the Russians would not release any technical data - one could only speculate. Also the heavy ply wing skinning was replaced with much lighter composite material, therefore reducing the overall weight by about 250 lbs. There were small changes in the aeroplane's appearance - the rudder shape and the addition of wing fillets quite apparent. Also, the canopy was a little shorter and now less streamlined.

Since then, the aeroplane has changed very little and, to everyone's suprise, the Sukhoi is offered for sale to the West (for a hefty pricetag, to be sure). As it stands now it will take time and a lot of money to develop an aeroplane to better the performance of the Sukhoi, but, after all, this is what competition is all about.

The Model. Most modelers build a model simply because they like the way the prototype looks; this was the main reason behind my Sukhoi design. On top of that I was sure to have a lot of flight performance. This is something to consider when flying in a contest or simply for fun. There are other advantages - the cowl is large and therefore, it is easy to hide the engine and exhaust systems. Also, its distinctive Russian flavor should not go unnoticed by the judges in a contest, besides there are lots of color schemes available. My model is based on the Repla-Tech 3-view drawings of the Sukhoi 26.

The model is Stand-Off Scale, however the outlines are exact to Scale. The only changes are in the wing airfoil, although the percentages were kept as per the prototype. Where there was a conflict between the 3-view and the photos, the photographic evidence was given preference.

The model is not difficult to build or to fly, but, of course, it is not intended for the beginner into R/C. The items most modelers find hard to make, such as the fiberglass cowl, canopy and the specially made landing gear, are available through me, as well as the aileron hinge nylon bushings and torque rods if the demand exists. Most of the other hardware are standard commercially available articles, so you should not have any problems there. I used a Super Tigre 2500 engine, but of course different powerplants could be used. Anyway, enough for now let's go on with the construction of the Sukhoi..." 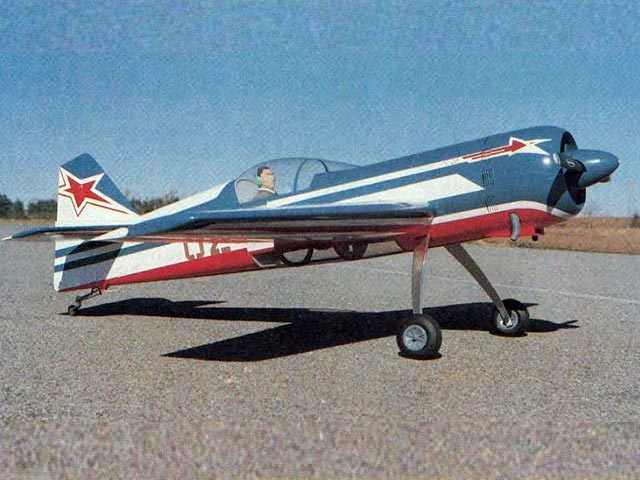 Hello, I am looking for the Canopy and engine Cowl, does anyone have email address for Mr Sepp Uiberlacher or is fibreglass specialties make these? Thank you
Didi Laksana - 15/07/2019
Add a comment