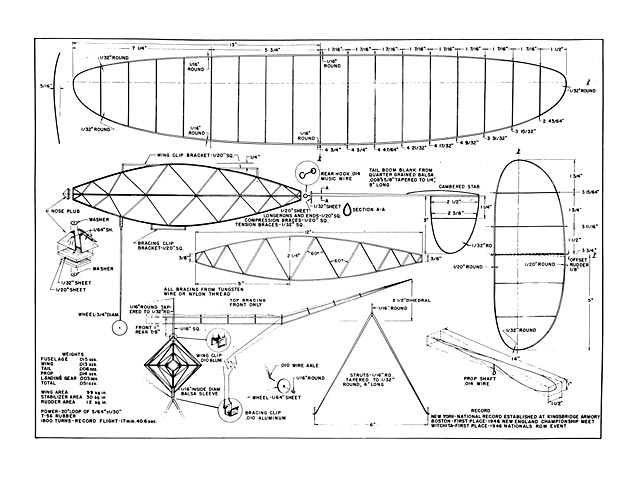 Quote: "Here's the lowdown on the Class B World Record holder of the Cabin ROW event at the 1946 Nationals. Built by the Dean of Indoor Models himself. Indoor Champion, by Merrick Andrews.

THIS CLASS 'B' fuselage model is the result of many years of experimentation and embodies many ideas not generally used be the model builders of today. The stressed body construction, commonly called the Warren Truss is stronger, lighter, and easier to make than the more popular paper-braced body. The wing bracing is used not only to strengthen the wing, but, also, to provide a positive method of flight adjustment, which is totally lacking in the majority of the fuselage models seen at contests. Construction of this model should start with making a full size layout, on either a smooth-faced wooden board, or a piece of heavy cardboard. All parts of this model, unless otherwise mentioned on the plan, are made from four to five lb balsa wood, and the letters QG on the plan specify quarter-grain wood.

Two sides of the fuselage should be made. Make sure the joints are well glued, then join the two sides with the end braces, and insert the other cross braces while spreading the two sides apart.

The nose plug is made as shown on the plan. The 1/20 thick by 3/8 square piece must be a snug fit in the front of the fuselage. This is glued on a piece 1/32 thick by 1/2 in square. Then the four 1/64 thick pieces are glued on the front to form a pyramid. Glue the two washers on the front, and one on the back, lining them up with .014 wire. The rear plug is made as shown with an .014 wire hook bent to provide a large cementing surface on the rear of the plug..." 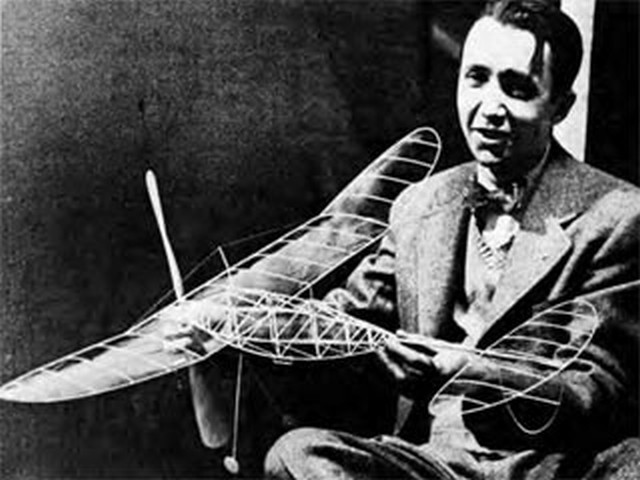