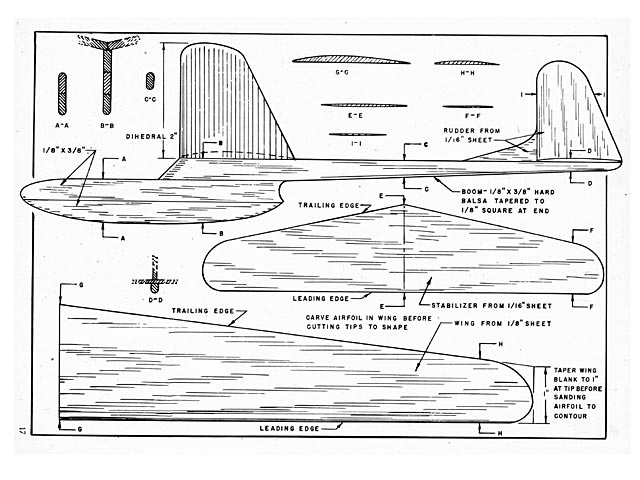 Quote: "All aboard for a voyage on the bounding ocean of air with a glider as swift and graceful as a seagull. Sailor Boy, by John Stockbridge.

S0 YOU WANT to be a model builder ? Well, OK. There is no better way of starting than to start with something simple, and the simplest thing you can start with is a glider. The glider embodies the most elemen-tary form of aerodynamics, free from all the complications involved in powered flight, thereby assuring the builder of successful flight performance. To the novice, there are few things that can be more encouraging than to see his handiwork take to the air and seemingly float on and on endlessly under its own power. The thrilling feeling that comes with watching the glider soaring along is easily understandable, for it seems as though the model has a mind of its own as it sails on its merry way.

Actually, the glider is a scientifically balanced machine and is subject to the physical laws of flight, as is any model airplane. But, by reducing aerodynamics to its simplest form, the science becomes a thing of tangible reality; a thing that can be understood and dealt with. It is this primary concept of what makes a model tick that must be thoroughly clear in the modeler's mind before he can expect to achieve any degree of success with powered craft.

Sailor Boy is a neat little job to learn with. It is extremely rugged in its construction and will, therefore. withstand the punishment dished out by the embryo modeler as he learns how to balance, adjust and throw a glider.

But first let's build it. The wing is made from soft one-eighth-inch sheet balsa, two inches wide, and should be constructed by the following method: measure off a distance of eight-and-one-quarter inches from one end of the sheet and draw a line across the sheet that is perpendicular to the edge. This represents the center line of the wing. From that line, measure another eight-and-one-quarter inches and cut off the sheet at this point, which leaves. you with a sheet sixteen-and-one-half inches long, with a center line drawn on it.

To avoid any complication in the building, the outside shapes of all the parts are straight tapers which allow the use of a ruler when cutting the outlines. Draw the center line on the bottom side of the wing in the same position as on the top side and cut the taper in the trailing edge. This is done by measuring off a distance of one inch from the leading edge at each tip and laying a straight edge from this point to the point where the center line joins the trailing edge, and cutting with a razor blade. The wing may then be cut to airfoil shape.

From sections A-A and B-B we see that the underside of the wing is perfectly flat and that the top side is rounded off. The thickest point on the airfoil is one-third back from the leading edge. Wrap some number zero sandpaper around a block of balsa and sand the trailing edge down to a sharp edge, forming a taper from about fifty percent of the chord to the trailing edge...." 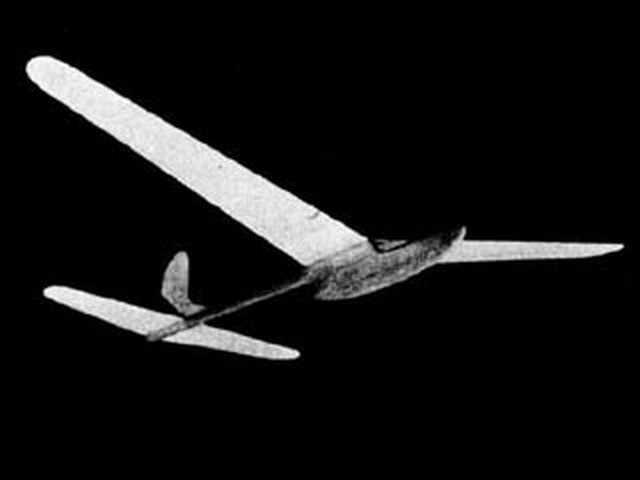