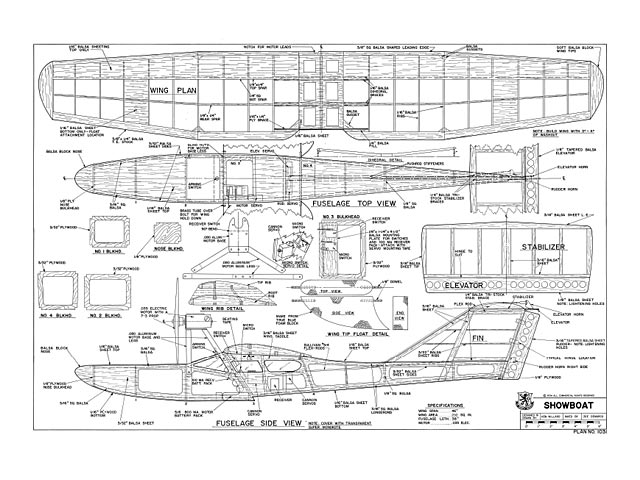 Showboat. Radio control flying boat for electric power, with Astral Cobalt .035 motor. This is a redesigned version of the older 'Seafoam' Willard design.

Twenty years ago I designed an amphibian which I called the Seafoam (oz8036) - the name came from the fact that the wing and stab were made out of molded foam; they were part of a Midwest Cardinal kit. The model was a good performer but, unfortunately, the availability of the wing and stab combo disappeared when the kit went out of production. Years passed, and my model hung up in the shop, essentially retired.

A couple of years ago, Dick Kidd sent me a note, along with a set of the Seafoam plans, and said: Why not update this design with a built-up wing and stab? There are a lot of new modelers who would like to try an amphibian. Well, I gave it some thought, but no action. Power models in the .10 size engine class were not high on the popularity chart. So the model hung in the shop.

Time passed, and the situation changed. No - not so much for .10 size glow models, but advances in electric power were making electric models more and more popular. Also, they weren't noisy. The final kick for me was watching an Astro Cobalt .035 turn a 7 x 3 prop at around 12,000 rpm at Astro Flight's booth in the Toledo Show back in 1986. I was impressed. My experience with electrics up until that time had been disappointing.

Not only had the electric motors improved, but so had the accessories. Nicad battery performance was better, and fast chargers were available that didn't have to be carefully monitored for fear of overcharging, Obviously, it was time to give electric power another try. The final thrust to that idea came when we had to put a new roof on the house, and I had to cover all the models hanging up in my shop - all thirty-five of them, in various stages of condition ranging from partially completed to retired and decrepit. Shucks, it would be easier to take them down than cover them, so I did. The Seafoam was one; another was a partially completed L-19 Bird Dog 1/2A model. Somewhat bemused, I put the Bird Dog wing on the Seafoam hull. Hey, that looks good. All that needed to be done to make the wing fit was to make a cutout in the center section trailing edge, and even that gave the combo a bit of extra personality.

So, after the new roof was finished, I decided to modify the Seafoam hull and the Bird Dog wing and come up with an electric flying boat. First I toyed with the idea of a V-tail design, to keep the tail surfaces up from the water, but I discarded it. Too much gimmickry, especially for a lightweight electric. So I changed to a T-tail design, and made a new fin and stab structure. Also, to reduce weight, I made cutouts in the sides and top of the hull.

When the structure was all done, it seemed a shame to cover it and hide all that framework. No problem - cover it with transparent Super MonoKote. It turned out to be very nice looking, and a real eye-catcher. It not only showed the structure, but you could also see the servos, receiver, batteries, and maze of wires. So, since it is a flying boat, and shows all that good stuff, let's call it the 'Showboat.'

The Showboat is not hard to build. Maybe a bit tedious, making all those cutouts in the hull, but not hard. And the wing shape means cutting out different sized ribs for the tapered tips, but you have to admit it has more pizzazz than just a straight 'board' wing. Most of you will have no problems with the basic structure, but here are some hints to help you..."

Quote: "Steve, Thanks for all your hard work providing a plans resource. Here is a scan of Ken Willard's Showboat. Sorry it's not a great scan, the plan is old and yellow. I hope it is useable. Happy landings"

Update 18/03/2015: Replaced this plan with a clearer copy thanks to Balsaworkbench. Scanning by Don at EAC, cleanup by theshadow. 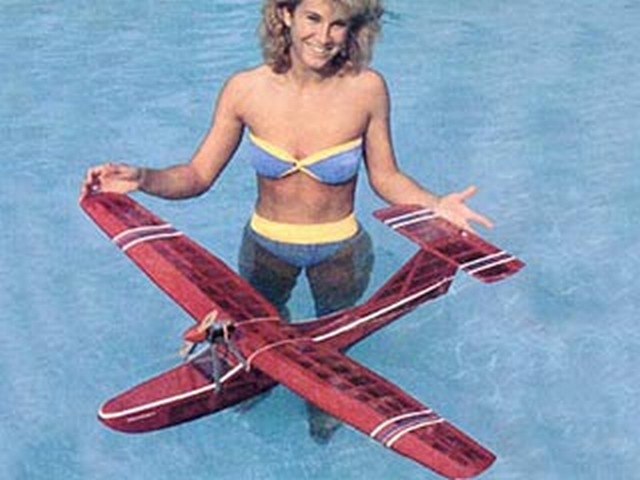