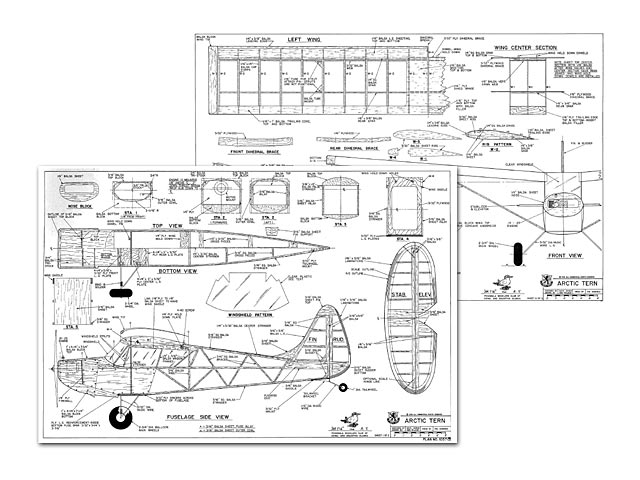 The Interstate S1B2 Arctic Tern is a direct descendant of the Interstate Cadet of fifty years ago. It was being manufactured in Anchorage, Alaska by Arctic Aircraft Co as an attractive alternative to that ubiquitous Alaskan bush plane, the Super Cub. In 1985 the base price of the AT with a long list of standard equipment was $44,000. Approximately thirty-five have been built and some of these were delivered to customers outside Alaska.

The Arctic Tern is equipped with a 150 horsepower Lycoming engine which allows a 117 mph cruise at 75% power, a 1275 fpm climb at a gross weight of 1900 lbs, a stall speed of 35 mph, and an absolute ceiling of 21,000 feet. Empty weight is 988 pounds. This performance makes it a natural choice for a bush pilot.

The Arctic Tern should also interest the scale enthusiast. It looks more like a model than a model, the factory color schemes are dynamite, and it has very few features that are difficult to duplicate.

This version is 1/8 scale. The first prototype was 3-channel - rudder, elevator and throttle. It was built by Van Wilson and test flown by Bill Toppa and myself. With a balance point at 30% of wing chord and normal control throws, it was a wild thing and quickly tried to eat a frozen lake. Thanks to the snow cover, damage was very minor. We then moved the battery pack from the rear of the cabin to a position near the fuel tank to give a CG at 25% of chord and reduced the control throws to 3/8 in either way (rudder and elevator). It is still high spirited but quite manageable.

The second model built has a slightly enlarged horizontal stabilizer which is shown on the plans along with the original scale outline. This should tame the antics, but I would still advise the first flights be made with a forward CG and minimum control deflection. Weight should also be kept under four pounds.

Flying: As a starting point, balance the model 2 in or less back from the leading edge. Elevator travel should be ± 3/8 in and rudder travel ± 1/2 in. The engine in Van's prototype is a well worn K&B .19, mounted upright to make tinkering easier. The engine in mine is an Enya .19, cowled in much too tightly for a sport model. A rational approach would be to side mount the engine as I did, but carve a larger opening in the right side for access.

For an uneventful first flight, the landing gear on a taildragger deserves a little extra consideration. First, the airplane should roll easily and in a straight line. A little toe-in is usually helpful but not so much that the wheels bind or the whole plane hops as it rolls forward. The tailwheel strut should be quite tall (as is the strut on the full size). A short strut gives a nigh static angle of attack that makes airplanes go goofy as they start to lift the tailwheel during the take-off run. Standard taildragger techniques may bear repeating. Hold the tail down with elevator as you increase the throttle until enough speed has built up to fly the tail. Then release the elevator stick and let the plane build up speed. It may be necessary to hold a little right rudder, Don't be in a hurry to be airborne..." 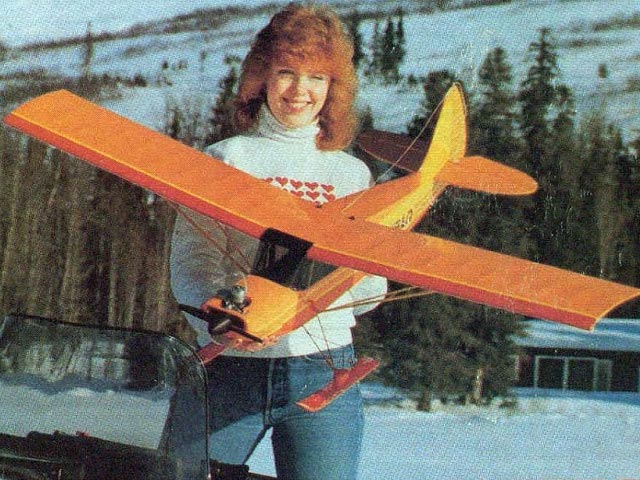