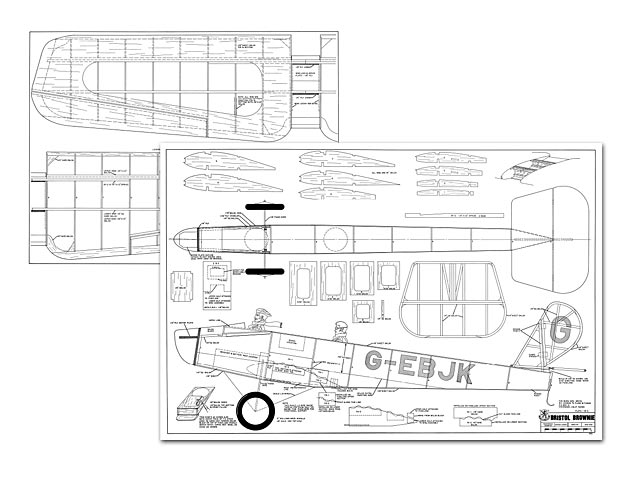 Quote: "The Bristol Brownie was destined to become one of those obscure aircraft that was deleted from the vintage aircraft files. I became aware of its short lived history when I was going through a file of 3 view drawings that I had purchased from W.G. Hannan Graphics in California, under the company name of 'Plans & Things' (a very good source of information by the way). It was the first vintage airplane that I know of that used the adjustable dihedral feature, although not incorporated in this model. The Bristol Brownie, unlike the Blackburn or Demoiselle, is ultra simple for anyone who has ever used an X-acto knife.

By this one can see it was a fast little plane in it's day with a minimum of weight. The first flight was made by G-EBJK on the 6th day of August 19214 by Cyril Uwins, then soloed by Barnwell and later flown by both of them together. Barnwell was credited with both the Biconvex wing and the Segmental Ailerons of the Bullfinch type. The original ailerons were actuated by a single cable against rubber cords but later adapted to a return cable. Two types of wings were used on these aircraft: one wood, the other metal in hopes of higher speed. The first mishap was to G-EBJK on Sept 5, when TW Campbell had the misfortune to foul some telephone wires and made a crash landing on the airfield at Filton where the damage was repaired in time for the air trials at Lympne.

Uwins flew G-EBJK and designated it No.1. G-EBJL was flown by Campbell and designated No.2. making its first flight on 27 September that year. G-EBJM was also flown by Campbell and designated as No.3. No.3 was entered as a single seater with a long range tank and entered the Grosvenor Cup Race. ln the main trials Uwins took second place of 500 pounds for the best take off and landings, this being the Duke of Sutherland Prize. Campbell won 3rd with an average speed of 70 mph, In late December of 1925, G-EBJK was considerably modified giving the aircraft a higher speed. The top longerons were altered to a slope, giving the pilot a better view. A larger engine and strut braced landing gear, still with a flexible axle as the only means of springing, were installed and the plane was redesignated Model 91A.

The Brownie went through a series of changes in the remaining years; metal prop, modified landing gear, shock absorbers, enlarged horn balanced rudder, and redesigned cowling, etc, but the Brownie held it's basic shape. In September of 1926 model 91B was entered in the Daily Mail Contest. Uwins won third prize of 500 pounds and won second in the SMMT Handicap on September I8. G-EBJM was hired by the London Aeroplane Club in 1927 and entered in many races in its remaining years; it was scrapped in 1930. G-EBJG was similar and was used by Bristol and Wessex Aeroplane Club until they moved in 1930. G-EBJK was less fortunate in that it was alloted to Capt. Barnwell for his personal use and on Mardi 21, 1928 came to it's end on an attempted flight against a strong wind, It was in view for nearly an hour as he battled high winds. When he took off he encountered severe draw awash over trees and in spite of full power, crashed on a road. He was unhurt but G-EBJK was a write-off. Although excellently built and engineered, efficient in performance and economical to use, it was expensive 10 build and not rugged enough to stand up to normal dub use. Nor was it cheap to repair and, with the coming of the DeHaYillarkl Moth, the Bristol Brownie was forgotten_.

The 2 inch scale Bristol Brownie presented here is another model in my collection of those 'magnificent machines' of an era past. At first you would say, 'How can it fly with such an unbalanced ratio of horizontal stahilizer to wing area?' At this point, even I cannot explain this! But there will always be some questions unanswered about this type of aircraft in the beginning years of aviation. Probably the long tail moment and forward CG compensated for the small stab.

Here again we, by we, I mean Al Signorina of the McDonnell RC Club, and myself, decided on a more closed fuselage type construction than we have been building in the past. This gives the builder less construction time and more flying time, while retaining that touch of nostalgia - so off we went to the Balsa Store.

It didn't take but a short time to rough a set of drawings with the help of the three view drawing from W.C. Hannan. Our first attempt at the finished drawings showed we needed to beef up the entire structure for R/C flying..." 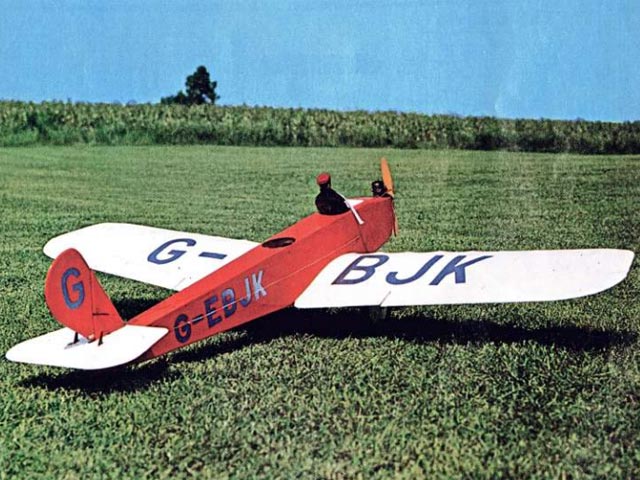