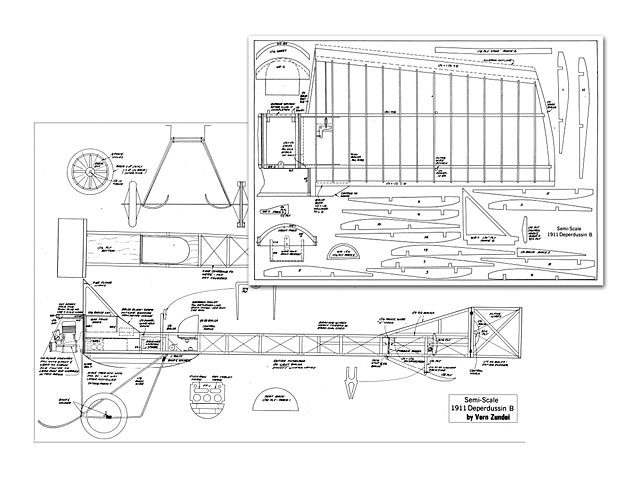 Quote: "Well here I am again trying for another nervous breakdown. Another antique! The Blackburn, Demoiselle, Bristol Brownie and Antoinette weren't enough - I had to pick on one that the original designer either ran out of drafting paper or construction material because he never did finish the front end. There is no front end!

We now bring to you another 2in scale replica of a classic aeroplane of the early 1900 era. It's called the Deperdussin B; the B signifying the military version. This is also one of those aeroplanes used in Those Magnificent Men, but was not seen flying because it was one of the two originals in the film. The Blackburn and the Deperdussin were loaned to 20th Century Fox for the film by the Shuttleworth Trust and were only seen briefly throughout the film. The Deperdussin is said to be in excellent flying condition and is of original design and structure and like the Blackburn, it is kept in this condition by the Shuttleworth Trust.

The Deperdussin was built about 1911 and had a wingspan of 28 feet 10-1/2 inches, and a length of 24 feet 11-1/2 inches. With a total wing area of 263.72 square feet, it could attain a speed of 65 mph. Covering was oiled cotton on the fuselage, tail and wings, plywood on the cockpit floor and ventral fairing and an aluminum cowling. In the year 1911 following the beginning of the company and the Circuit of Europe race, no less than seven Deperdussin's were entered and third place was won in that race by a chap by the name of Rene Vidart. In another race in August 1912, Maurice Prevost won second prize with his Gnome powered Deperdussin. Numerous other cross-country races were won by Deperdussins.

The fuselage was constructed of a single box-girder type and was quite shallow. It was said that it appeared as though the pilot sat on it rather than in it, and as an be seen in the photos of the model, this appears to have been quite true. The wing was of the two spar type with the usual amount of ribs, etc. We changed at this point to incorporate ailerons, which I think aid in making it a stable, flyable scale replica. The landing gear had to be moved forward 1-1/2in to acquire good ground tracking and takeoff. It's very noticeable that there is no structure beyond the leading edge of the wing; since the CG should fall at about 30% of the wing chord, we did have our problems in over-coming this little gremlin! After installing a certain amount of lead, we tried to launch the Deperdussin with a .19 on the checkout trials. Needless to say, this just didn't work out at all. (Something in the class of driving the American Eagle with an .049). We rearranged the entire R/C equipment installation, moving it farther forward to balance the model. We also installed a used .35 of unknown condition—you guessed it—it wouldn't start! Then we installed our good old standby—the Fox .36X R/C.

We then removed the tons of lead that I had spread like cream cheese all over the front of the plane. A one-half pound chunk of concentrated lead was installed directly under the engine just aft of the prop. All kidding aside, for those who will endeavor to build the Deperdussin, or any other of this type; remember to keep the rear of the plane light in material and structural design. But don't sacrifice structural integrity or your whole project will go up (down) in a cloud of silk and little bitty, bitty pieces.

The Fox .36X provided enough power for scale takeoffs, but we later changed to a Veco .45 to assure ROG's from grass fields. The prototype weighs 5 pounds; with four square feet of wing area. This gives a wing loading of 20 .ounces per square foot, which makes it easy to fly and dead stick landings are no problem. Flying wires should be used as shown in the fuselage construction for torsional rigidity. The wing wires are for appearance only, as the wing is built strong enough to fly this model without the rigging. Since you need weight up front anyway, you could sheet the top and bottom of the for-ward two inches of the wing. Also an oak, maple or lead leading edge would help..." 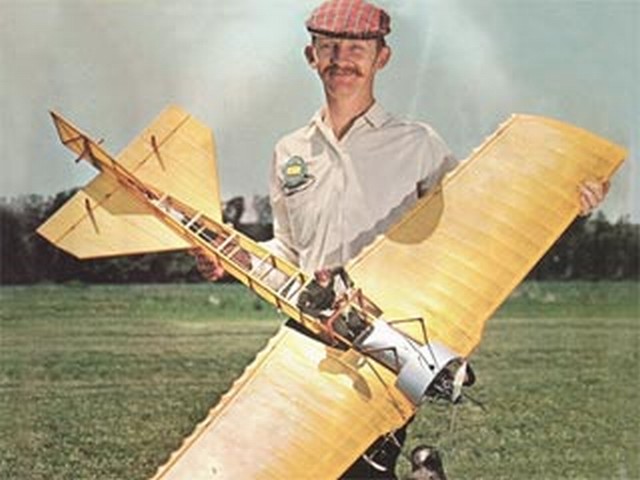