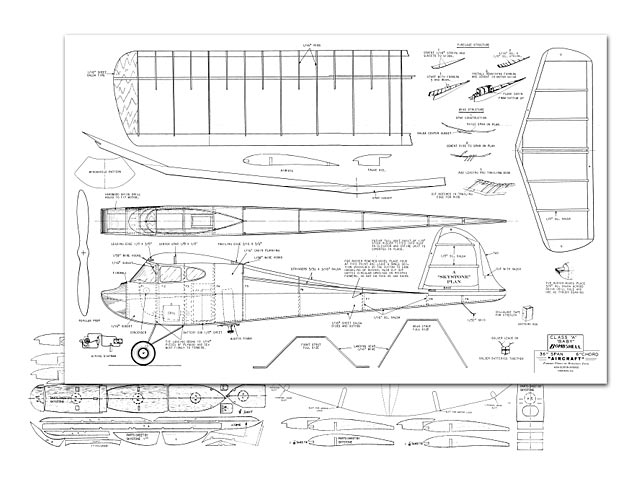 Class A Baby Bombshell. Free flight gas model. This is a 50% version of the classic Buzzard Bombshell (oz5360) design of 1940, here at 36in wingspan and 6in chord. For Class A engines.

Quote: "An FM Product Review: 4K's Baby Bombshell. This popular Old-Timer done in miniature is adaptable to a variety of control systems. Here's two of them. By Fred Koval.

Faced with an ever decreasing number of flying sites in the Northeast, it has become necessary to spend more and more time on the road to enjoy our hobby. It is not unusual to spend forty five minutes to an hour to get to a club field in the area of New Jersey where I reside, limiting our activities to the weekends and leaving us at the mercy of the weather.

How desirable it would be, I've often thought on a balmy summer evening, to take one of my planes to the local park or schoolyard and get in a few flights after dinner. These pleasant thoughts were usually interrupted by visions of the residents sur-rounding such sites promptly phoning the police to have me quickly removed. The harsh reality is you just cannot fly anything powered with an engine larger than an .049 out of a park or schoolyard, at least not for very long. Besides the noise, it constitutes a hazard to fly a six or eight pound aircraft powered by a .40 or .60 engine out of such a confined area. For several years I was forced to accept the situation until I stumbled upon the solution to my dilemma quite by accident.

In 1977 Joe Beshar, a fellow club member, became interested in electric powered aircraft and sponsored several 020 electric free flight contests. After much prodding by Joe, I decided to build an 020 electric plane and enter his next meet. The plane I selected is the subject of this review.

The Baby Bombshell kitted by 4K Models, Torrance, California 90504 is a 36 inch span version of the famous full size Buzzard Bombshell (oz5370) also kitted by 4K. It is designed primarily for free flight using the Cox .020 glow engine. It is not limited to this service though, as it is equally well suited to 020 electric free flight, .020 glow R/C, and with compact, light radio gear, 020 electric R/C. Priced at $10.95 retail, it is not going to bankrupt most modelers either.

Upon opening the box and examining the kit contents, I was reminded of the first Comet kit I ever built as a youth. Other than the hand-cut fuselage formers, all of the components necessary to build the Baby Bombshell are supplied in printwood form, neatly and accurately printed on balsa sheets. Having been spoiled by many years of building from hand cut or die crunched parts, I was at first a bit reluctant to undertake the chore of cutting out all those parts. I put the kit aside and moved on to other projects. Several weeks later while watching television, I dragged out the kit along with a piece of Homosote and a couple of single edge razor blades, and much to my surprise, had all the parts cut out and sanded in less than an hour.

Construction of the easily built aircraft proceeded quite rapidly, requiring a total of only six hours, including the hour to cut out and sand the parts. The plans contain detailed building instructions and they should be followed. The only modifications I made and would suggest, are the addition of diagonal braces to the horizontal stabilizer to resist warping and the use of 1/32 or 1/64 plywood for the cowl, since the 1/16 balsa provided was impossible to install without cracking despite soaking in a water/ ammonia solution.

The aircraft was covered with strong, light weight Silk Spun Coverite, taking care not to pull any warps into the structure. Silk Spun Coverite is generally superior to the plastic heat shrink coverings for these light structures, since it will stop shrinking when 1/2 gram of resistance is encountered even if additional heat is applied. It is necessary to exercise some care when tacking the mate-rial to the structure though, not to pull any warps into the framework, just as you would have to do if using the tissue covering supplied with the kit. If building the aircraft for electric power no additional finish is required. If building the .020 glow engine version, a thin coat or two of clear dope should be applied to prevent the fuel from soaking into the covering.

An Astro Flight 020 electric motor with the free flight battery pack was obtained from Astro Flight Incorporated, 13377 Beach Avenue, Venice, California 90291. The motor was installed by carving out a small block of balsa which was cemented in the nose to support the unit using rubber bands as shown in the photo. This mounting arrangement allows the addition of thin balsa shims to alter the thrust setting while trim-ming out the plane. The ready-to-fly weight came out to ten ounces, resulting in a wing loading of 6.7 ounces per square foot.

Having completed the Baby Bombshell, I was most anxious to fly it. Choosing a site with some reasonably tall weeds I gave it a half dozen hand glides, adjusting the horizontal stabilizer with thin balsa shims to obtain a flat glide without any tendency to stall or dive. The battery pack was then given a short charge of about thirty seconds (an advantage of the electric flight system is that the flight battery can be charged for a limited period of time, resulting in a reduced motor run. At his meets. Joe charges for two minutes, giving a motor run of twenty to twenty five seconds. A full charge would probably result in a lost aircraft) and several powered flights made to adjust the thrust settings. Once the necessary adjustments were made, the battery was given a two minute charge, resulting in the first of many satisfying flights. By controlling the charge and thus the motor run, 020 electric allows free flight in a surprisingly small area.

Satisfied with the electric version, I purchased another Baby Bombshell kit and proceeded to build an .020 glow version with radio control for the 1978 SAM Champs. The radio equipment selected was a Cannon Tini-Block which incorporates the rudder servo in the basic receiver block with a separate servo for elevator control. As shown in the photographs, the receiver/rudder servo brick was installed in the second bay aft of the firewall with the 225 Mah battery pack in the first bay. A 1/16 inch plywood hatch, held in place with rubber bands and dowels covers and allows access to the equipment. The elevator servo was installed in the first cabin bay which necessitated relocating the wing hold down dowel to a point just forward of the main cabin bulkhead (F-2) as shown in the photo. A rudder was cut from the existing vertical stabilizer and an elevator fabricated from light sheet balsa. Control horns made from 1/16 inch plywood were cemented to the control surfaces which were installed using figure 8 thread hinges. Sullivan GRC-3 .030 control cables completed the installation. The total weight, ready to fly was 14 ounces with a wing loading of 9.3 ounces per square foot. Powered by a Cox .020 TD engine the Baby Bombshell took a third place in 020 R/C at the 1978 SAM Champs, as well as providing me with hours of enjoyment flying out of a schoolyard in my neighborhood.

Rather than being asked to leave, several residents from around the school would walk over and watch me fly. On one occasion, the police officer on patrol pulled his car up and following several flights commented he might like to get into R/C. I am now in the process of building a third Baby Bombshell for 020 electric R/C using the Astro Flight 020 system and Cannon's new Super-Mini R/C gear with two channel brick and 100 mah battery pack. School yard flying is here."