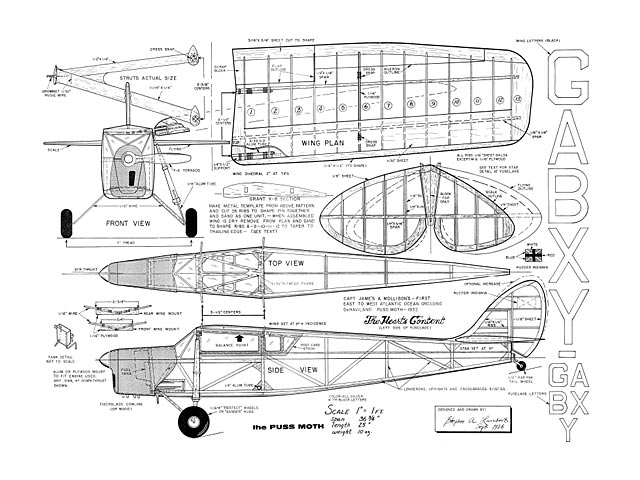 In 1954, at the fifth annual free flight meet, held in Winston-Salem, NC, David Carroll, Carl Duncan, Tom Purcell (of ducted-fan fame), and I contrived to show 'the powers that be' of this fine contest that Half-A Flying Scale should be included in this meet, and in order to further our point took six or seven models along to prove that scale models would fly and fly well. Shortly after the meet, word came that Half-A Flying Scale would be included in the 1955 meet.

This model was designed to win that meet, which it eventually did in 1956. The original model flown in 1955 was a complete flop, because it was built strictly to scale and weighed in at about 12 or 13 ounces. It was not pre-flighted until the day of the meet. However, the second model, which is the one shown in this article, proved itself with flying colors. On a 30-second engine run, the model did 1:09 sec in very windy weather, and scored 92 scale points out of a possible 100. It will ROG just like the full-sized aircraft, and turn in flights of thrilling performance, climbing in large left circles under power and descending in large right circles in the glide.

Factory drawings were supplied by the DeHavilland Aircraft Company Ltd, and the builder may rest assured our drawings are as accurate as humanly possible. The drawings also have been double-checked by the enlarging process.

Construction is strictly conventional except for several small details, and an explanation follows:

Being a shoulder-wing model, careful consideration was given to the wing mounting. The method used herein has proved very satisfactory and also makes for ease of transportation, since both wings are detachable. Follow the construction on the plans and use ample cement to glue the wing supports to the fuselage members. (Note that the wire wing mounts are bent upward and rearward to accomodate the dihedral and sweepback.)

When the stabilizer is dry and sanded to shape, pin it in place atop the fuselage, and on the underside only, cement to each side of each center rib a piece of 1/16 x 1/8 balsa flush with the top longerons. This not only acts as a placing guide for the stabilizer on the fuselage, but will form the lower stabilizer to which the tissue covering is attached.

Since the wing spars go through the ribs, it will be necessary to 'fill in' at the root rib, and cement to the underside of the spars, the leading edge and the trailing edge a piece of 1/8 hard sheet balsa, fitted and shaped to the root rib and the fuselage side. Not only does this piece act as a root reinforcement, but it also serves as an incidence guide for the two 3/32 aluminum tubes which are bound to the spars and the leading edge to hold the wing in place.

The cabin details consist of the following: instrument panel, stick and rudder bar. On his cross-ocean trip, Captain Mollison used a three-legged stool in place of a conventional seat, the heavy seats being removed to lighten the aircraft and provide extra gas-tank space for the trip.

All other details such as flap outline, aileron outline markings, etc, are shown full size on the plans. The wings, stabilizer and rudder are covered with 00 Silkspan and the fuselage covered with gas model Silkspan. Use fuel proof dope for painting.

Any .049 engine can be used. Our model had an Atwood .049 Cadet for power. Be sure to provide an outside glow-plug connection for starting in order to eliminate constant cowl removal." 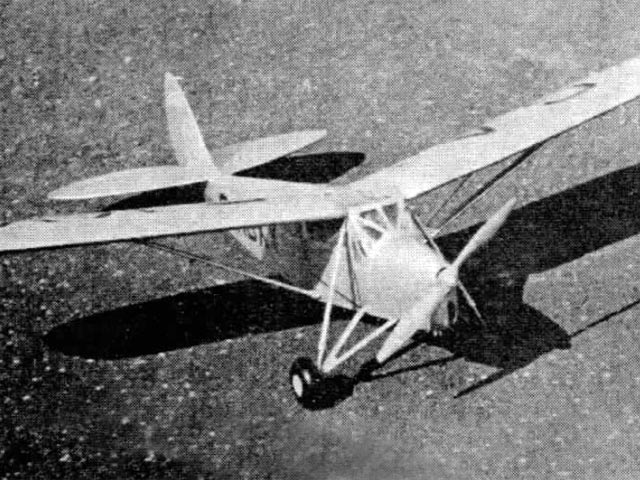