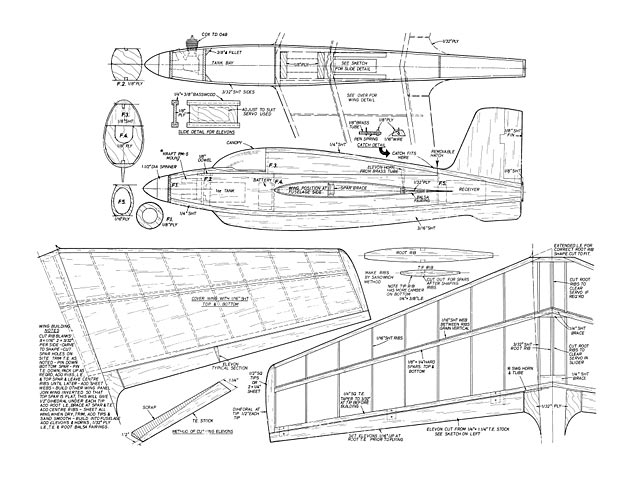 History. The Messerschmitt Me163 Komet is described in Profile 225 and this model has been designed using this and other references. The full size Komet originated from designs by Alexander Martin Lippisch and incorporated a Bi-Fuel rocket engine designed by Helmuth Walter. An interesting item is that an engine-less prototype was test dived to 528 mph after being towed to altitude. The engined version was tested at over 500 mph in 1941 and later was flown at over 600 mph before encountering compressibility effects causing loss of control! The speed was actually 623.85 mph! Most of the development work was being done at Peenemunde-West which caused the Allies to concentrate their bombing there.

The actual use of the Komet in air combat did not occur until May 1944 due to fuel feed problems and other small 'Pilot Killing' problems. The excess speed of the Me 163 over bombers gave only 2-1/2 seconds to complete an attack.

At the end of WWII about 48 aircraft were captured intact and no fewer than ten still surive in various museums around the world.

Construction. Perhaps the beauty of this little model is that the construction is so simple and being a one-piece airframe, the model is very strong and bounceable. One essential point concerning small models is the need to watch weight carefully and to this end it really is essential to select balsa and other materials with an eye to weight saving. So select your balsa carefully and even be sparing with the glue - the end performance of the model will be well worth the effort.

Fuselage. Although little really needs to be said about construction of this model. perhaps a little extra pre-planning would be worthwhile due to the one-piece airframe which may restrict options on things Like radio installation, In fact it might well be a good idea to construct and bench test the two-servo control linkage sys-tem to the elevons ensuring that the system operates smoothly and precisely ready for installation in the model at the appropriate time.

Pre-planning may also be necessary with the rest of the radio installation. For instance only the smallest receivers will fit into the extreme fuselage rear as shown and installation further forward may require careful attention to weight distribution to achieve the correct ba-lance.

Basically, the fuselage is made up from sheet sides. with block top and bottom. To make life easy for yourself in achieving the necessary curvature on the fuselage sides. try soaking the outside surfaces with water and. while still wet. give the inside surfaces each a coat of clear dope. This will induce a curse into the sheets which will then more easily fit the curved fuselage formers. A suitable machined metal motor mount is available to suit this model from Solent Models, 60 Oxford Street. Southampton.

Wing. Both rib-for-rib and foam core construction methods are shown on the drawing - the choice is yours. In either case, construction presents
no great problem, but wing panels should be assembled separately. Thereafter, each is plugged into the fuselage and joined with the 1-1/16 in plywood dihedral braces, the whole jigged to give 3/4 in under each wing tip. Pay particular attention again to the elevon linkages which should be completely free. The strip elevon can be fitted after assembling wing panels to the fuselage.

Flying. Balance the model carefully - certainly no further rearward than shown. Initially. set the control surfaces with a neutral point Via in. up for positive) at the trailing edge. This then achieves the necessary reflex airfoil section which this tailless aircraft requires. Elevon control movements from.neutral are as follows:

Remember that by changing the elevonn horn length, you alter the throw of both elevator and aileron function. Throw travel for individual functions should therefore be altered at the individual servos.

Although a test glide won't tell you much about the finer points of the model's flight characteristics, a good hefty throw downhill over grass might well be a worthwhile to determine if the machine is out of trim. After that, it's a case of firing up the motor and letting it go, but assuming a reasonable trim condition and the control surface throws suggested. your proportional radio will do the rest. Just be sure of a short motor run for the first flight just in case! " 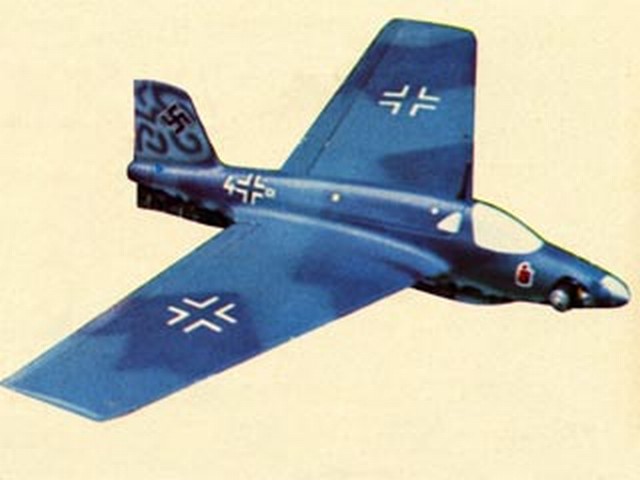