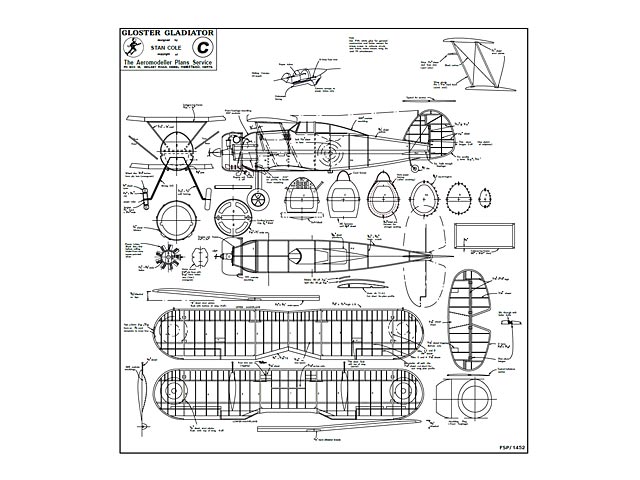 Quote: "I have the plan and article from Aeromodeller 1983 by Stan Cole for an 18in wingspan Gladiator which does not seem to be in Outerzone or Vinplandex. Plan and article attached. The plan is poor quality as it is scanned from a reduced size plan from the magazine."

Note this is not a full size plan, this is a low resolution scan of the drawing as printed (with pattern background) on the magazine page. I am listing this entry now in the hope that a clearer copy will be submitted over time [edit: fixed now, see below].

Update 24/1/2022: Replaced this plan with a clearer copy, thanks to hjsaxe. This has been redrawn from scratch in vector format.

The numbers of Spitfires and Hurricanes on strength was all too few at the outbreak of war in 1939, and many other types were pressed into service to augment their fighting power. One such type was the Gloster Gladiator, a chunky little 'bipe already obsolescent in 1939, but nonetheless destined for action in a number of theatres of war and to be responsible for the destruction of many German and Italian aircraft.

The prototype depicted here is that of F/O HE Vickery and served in the Norwegian campaign. By employing acetate mouldings and careful selection of light stock, the finished model weighed only 2-1/4 oz. With a wing area of some 120 sq in, the lightly loaded model flies well with a standard Telco CO2 motor.

The model may be finished 'full house' with dummy engine, sliding canopy and rigging etc. I found the super reference given on the Aeromodeller scale drawing No.2714 helped enormously, but remember all items should be kept as light as possible.

Fuselage: Start by building the basic crutch from medium 1/4 x 1/16 stock, up to former No.1 (engine sub-frame comes later), next add fuselage formers 1 to 6 followed by 1/16 sheet spines, the undercarriage will have been bound to former No. 1 using strips of mm ply to take the stress of the nylon thread binding. Former 4 has a sub-former at the rear as a seating for fuselage stringers.

Next add 1/16 sheet cockpit 'platform' and add 1/32 soft sheet from former 1 to 4 leaving a cut-out for lower wing as shown in the side view. Cut out also aperture for canopy; this is followed by the addition of 1/16 sq stringers from former 4 to end of fuselage. When dry, cut out a slot for the tailplane, and also for the gun troughs and line with notepaper, add former 1A to former 1 to locate front fuselage moulding.

The entire fuselage is now skinned with lightweight modelspan and given one coat of 75% clear dope. Next add the canopy (fixed or sliding to choice), pilot, compass and cockpit interior 'green primer' finish. Cut hole in fuselage front moulding to take CO2 bottle and install engine.

Wings: A few pointers apart from the obvious shown on plan. Make a 1 mm ply rib template to ease rib manufacture. This can also be used by shifting down by a width of 3/32 in a time on 1/32 balsa sheet for making the 'split ribs' LE riblets.

Tailplane, Fin & Rudder: Keep these components light (medium soft) building as one piece but leaving hinge lines 'dry'. When completely dry, split through hihge lines and add thin aluminium hinges. Cover in one piece with lightweight tissue and slit through hinge lines again after 75% clear doping. Skin the wings with lightweight modelspan and also give one coat 75% clear dope.

At this point all components may be painted in the chosen livery (I used thinned matt Humbrol enamel) prior to assembly.

Roundels and registration letters, etc. may be made from plain white contact or Fablon with red and blue areas applied with ink bows (matt Humbrol - thinned). Note: underwing gun pods are made from acetate mouldings.

Trimming: As always check the centre of balance is about the same as shown on the plan. Make initial glides over the proverbial long grass and adjust the trim with elevator or rudder.

When satisfied that you have a reasonably good glide, try a power flight with 2 or 3 charges of gas only, keeping the motor upright. It should be trimmed to fly in left-hand circles, tweeking the rudder as necessary. If built as per the plan, there should be no need to adjust the side or downthrust of the Telco motor.

As a tribute to the designers of the original aeroplane, the Gladiator conforms aesthetically to the sound aircraft design adage - if it looks right, it probably is right. In my book, the Gladiator certainly fits this bill." 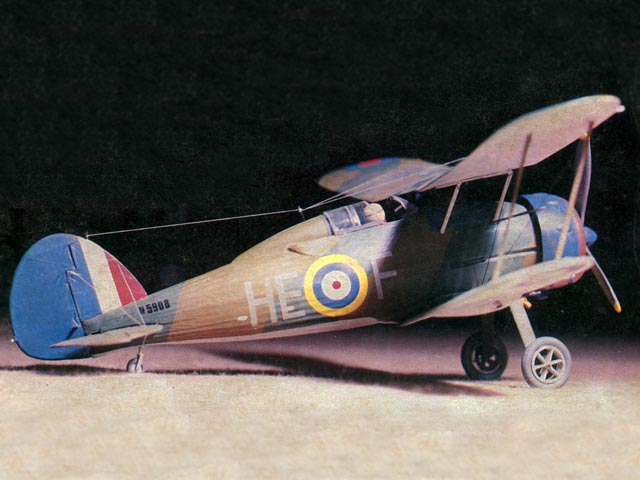