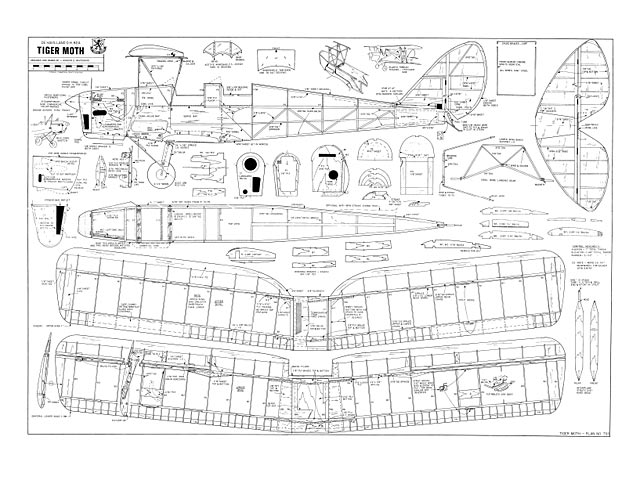 Quote: "DH 82A Tiger Moth. Build the Tiger that's really a pussycat - Gordon Whitehead is doing his best to get you schoolyard scalers flying .20 powered ships with his 47-1/2in no-frills Tiger Moth.

The full size Tiger Moth was developed from the Gypsy Moth using a similar scientific approach to that which modellers use to evolve their designs. First off, the Gypsy top wing was moved forward to ease emergency exit from the front cockpit. So then the wing had to be swept back to keep their retationship with the CG. The engine was inverted for bettcr pilot vision and also to hide the pots. Now guess what! Well the wing tips kept catching the ground. So the interplane struts were shortened, producing an instant cure, and also resulting in that unequal sweep back and dihedral.

And with her sort of homely appearance and gentle nature she became a lasting favourite right from her emergence in 1921.

Turning our attention to the model for an instant, she is 13/96th scale giving a size and wing area I've found, by experience, to be just right for a .20 powered light biplane type. Her performance is very scale-like (if rather too fast) and the full-size pilot's notes are a useful guide to handling this ship. More on flying later, so let's read some more about Tiger Moth exploits.

Between the wars, when the practice of aerial barnstorming reached epidemic proportions, Tigers formed the equipment of several 'flying circuses, and for a period of time, the Tiger held the World record for the greatest number of loops flown consecutively. One guy used to loop around a length of bunting held 13 feet off the ground - he also used to pick up handkerchiefs from from the ground with a 9 inch spike on the lower left wing tip; 800 times!

The Tiger's acrobatic repertoire included loops, rolls, bunts, upward rolls, inverted falling leaves, inverted loops and inverted flights - though there just had to be modifications lurking in the ships capable of the upward and outside antics. For instance, the standard Tiger is forbidden to flick roll, though not our model. For a full description of the Tiger's history, try to get 'The Tiger Moth Story,' written by Bramson and Birch, published by Cassell.

There are about 42 Tiger Moths in the US, and a dozen in Canada so color research shouldn't be too difficult. Profile No. 132 is useful to modelers for decoration details, but for nothing else.

Let's build! Fuselage: The front fuselage sides are medium sheet. Build on the rear fuselage, framework, then soak the front sheet in boiling water and weight the frames down, jigging in the bend between F2/3 with packing. When dry, contact cement the ply doublers in place. You can set the bend accurately by rolling a bottle over the curved portion, varying the pressure you apply in order to adjust the curl.

Now join the sides with the cabane mounts, F 10, F5 and the front lower cross-brace. Then join the stem post and all all cross-braces, and the 3/16 sheet at the lower wing TE. Epoxy F1 in place followed by MI and F2. Cut the exhaust aperture to suit your motor, cut the left M2 to suit, then epoxy both M2's in place. These are slipped in place from the bottom side. Engine mount nuts are soldered on to brass strip joiners, which are then epoxied to M1. Make up and fix the cabane in place, and bind the front LG legs in place on F2..." 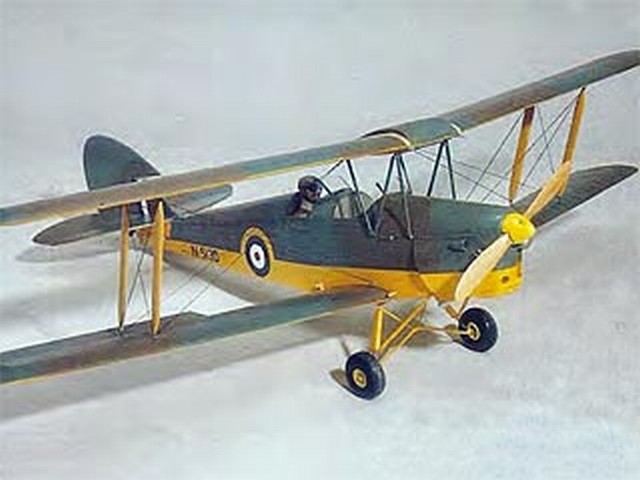 Hi. F1 as drawn has a drafting error and should be made symmetrical about the vertical centre line. Looking at the plan, the bottom line of F1 is too narrow on the left side - the one showing the cowl side sheet and doubler. To correct the error, builders should draw in the vertical centreline and trace the right (unsheeted) side of F1. Then fold the tracing about the centreline and copy the tracing to the other side of the line for a fully symmetrical F1. Sorry about that. Only just realised that I could comment. Gordon Whitehead, (the designer of this model, which gave me many many hours of joyful flying).
Gordon Whitehead - 08/09/2020
Hi Gordon! I met you at a little airfield called Brize Norton in the 80's, you were inspirational and very helpful in my formative years in aeromodelling, and I always wanted to say thank you. John Boy Paddy
John Green - 09/09/2020
Have added a supplement with drawing of revised former F1, as per comment (many thanks Gordon). Someone let me know if I got anything wrong with that.
SteveWMD - 09/09/2020
Add a comment