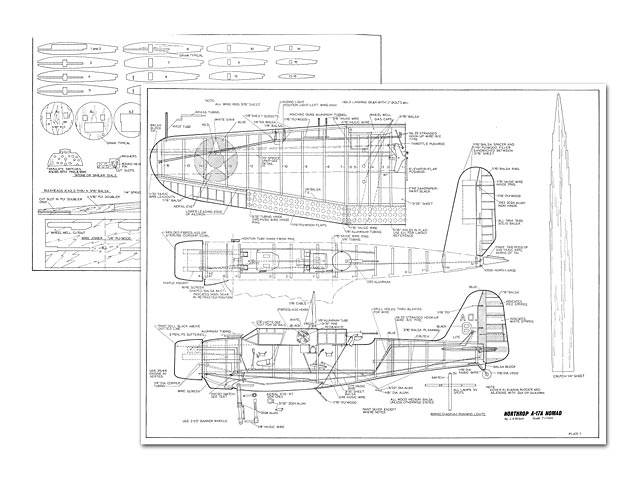 Quote: "Continuing MAN's record of offering the country's top C/L scale planes - designed to win with scale points it will also set the style for flying; stable hard-out on the lines is the usual pattern for flying. The Northrop A-17A Nomad, by JA Wilson.

During the 1930's the Army Air Corps began an intense expansion and updating program. Many new aircraft were ordered, and quite a few of them employed innovations and conceptions which paved the way for the 'hot' fighters of WWII.

The aircraft of the thirties are very suitable for U-control scale subjects - more so than planes from any other decade. Their proportions are next to perfect, and their wing and tail areas are ample. The A-17A is an example of an ideal subject from the 30's. Its layout makes a good flying model, and it has the room in the right places for engine, tank, Roberts Control, etc.

The A-17A was an early ancestor of the modern fighter-bomber type used so extensively today. It was the first to feature the multi-cellular wing, a type of construction which consisted of a honeycomb arrangement of ribs, spars, and baffles. This type of construction is used in almost every aircraft today.

One hundred and twenty nine Nomads were delivered to the Army in 1936 and 1937. Many were equipped with bomb racks to supplement the four .30 caliber wing mounted guns and the flexible .30 caliber gun, in the rear of the greenhouse. Top speed was 220 mph, and power was furnished by a 750 hp R-1535-13 Pratt and Whitney engine.

The A-17A was later designated the 8A, and was sold to many foreign countries. Around 1939, the Northrop firm was absorbed by Douglas Aircraft Corp, and the Nomad design resulted in the famous Dauntless of the South Pacific War.

The model is built to a scale of 1 inch equals 1 foot - giving it a wing span of 47-2/3 inches. Wylam plans were scaled up, and our model is a very acccurate copy in every way. To comply with current AMA regulations, the flyer must have a copy of a three-view drawing of the real airplane. There are two sources of the Wylam drawings: Dec 1943 MAN, and 'The
Best of Wylam' Book Two. Someone in your club or locality may have a copy you can borrow. These should be put in a booklet, and presented with your model at the contest. I suggest that you obtain the drawings before construction, as they will aid you in building.

This model will require a power plant of .35 - .45 size. Ours is powered by a Fox .40 with a homemade throttle. Be sure that your engine has a good throttle on it, so that you can qualify for taxi points, etc. Plans show the engine mounted inverted for better appearance. Ours was upright because of the early installation of a retractable gear mechanism -this was later changed to a spring clockwork system installed under the cockpit floor. This system is not shown on the plans; its installation is rather tedious, and varies with the type of alarm clock that is converted to the retraction motor.

The extra points that were gained from raising and lowering the gear were never needed in contests. In twelve AA and AAA meets, the model won first place every time, always by a margin of greater than 25 points.

Begin construction by cutting out all the wing and tail parts. Slip ribs 1 though 4 onto center of plywood bellcrank plate. Epoxy the spar doublers..." 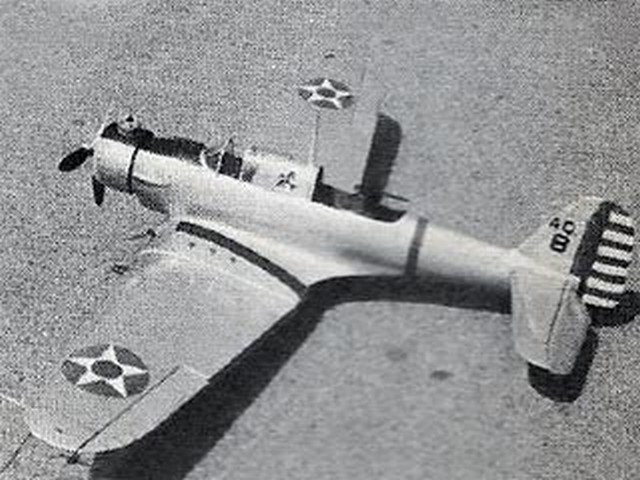