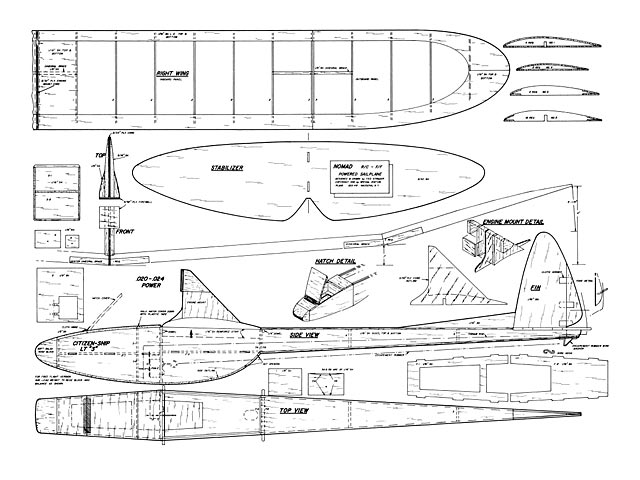 Quote: "Take a whack at R/C Soaring. Nomad's perfect for the job - with relaying receiver, 48in span, 9-1/2 oz. Simple structure, a good beginners ship... Here's hoping there are a lot of R/C modelers who, like ourselves, have been looking for a real change of pace. We've toyed with the idea of designing an R/C sailplane for about as long as we've been interested in controlled flight. Until recently it remained nothing more than an idea. Several sketches were made, exploratory drawings worked up, only to be put back in the files for a later date. When it was finally decided that an R/C sailplane was to be the next project, we hoped it would be several things, not the least of which was successful!

The final product, tagged 'Nomad', has many attributes. It is not too small and not too large. Though extremely simple to build, it has pleasing lines and has proved its appeal on the field. As its designer we must admit many moments of pride at the acclaim it has received by those who have seen it perform..."

Article pages, text and pics, thanks to DavidTerell. 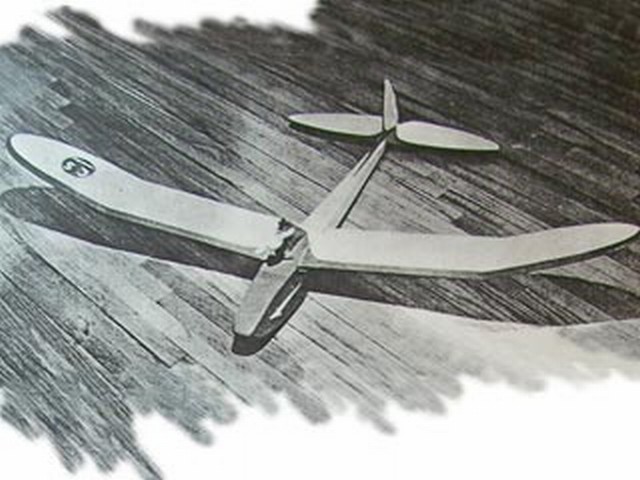 I built a lot of these back in the dark ages when radio was not so reliable. While the multi channel boys were destroying models, our Nomads just flew and flew. This plan is the original version as published in the magazine with an inadequate wing design, all of which folded. The kit version added a spar on the bottom of the wing, also a little weak. A spruce spar cured the problem. It turns better if you increase the dihedral by about an inch at each wingtip by using the tip dihedral brace at the center section also. It's not that it won't turn as designed, it's just slow to recover once a turn is started, a bit more dihedral and it's fine. This would make a fun electric these days, choose a high RPM motor because of the small prop clearance. As to power required, a PEE WEE 020 was too much but a Cox 010 wasn't quite enough. A 300 or 370 electric should be about right. Thanks again for your site,
DougSmith - 24/01/2015
Steve, I recently found these old pix of my last Nomad, built about 1974 [006-009]. It didn't last long. I foolishly used a balsa spar instead of a proper spruce replacement. My Pee Wee 020 was too much for the Nomad and it started to get up there really high. Trying to spiral it down from altitude, the wing folded. The radio did not survive. In magazines of the day, Mattel advertised a single channel system for a cheap price of something like $29. Me and my buddy Robert each bought one, only to find out why they were so cheap, very limited range, not enough to fly a model. But they did include a complete schematic of the receiver, which was AM on 27 MHZ. They used a silicon transistor with no bias as an AM detector, which required about .6 volts before it started to do its job. I replaced it with a germanium transistor requiring only .2 volts to conduct and range was greatly increased. The system came with a magnetic actuator that flopped back and forth all the time, giving somewhat proportional control. The modified radio actually worked well, and I don't know why Mattel didn't make such a simple change instead of dumping the project. We flew them in several little foamies until I moved mine over to the Nomad. No parts were available and I had to retire the radio. ...
DougSmith - 06/10/2015
Continued ... The old pix were pretty well faded and not all that good when first printed. I attempted to adjust color and it's as good as I can get. Just look at that disco haircut. And how about all that proverbial tall grass? Yes, that's an RCA tube caddy used as a field box, which they would give you if you bought enough tubes. A can of Fox Missile Mist fuel is inside, more nitro needed for the Pee Wee. Mine was covered with Jap tissue and clear dope, light and stiff. If you build one, be sure to add a SPRUCE spar, and cover it with something strong like MonoKote, not one of the rubbery coverings, or you risk wing flutter. These things are a lot of fun, might build another one, still have the kit plans ... [See more pics 006-009]
DougSmith - 06/10/2015
This definitely builds into a really nice looking small field glider. I built one of these from a kit, believe it was by House of Balsa. I made a mistake of covering it all in transparent Monokote some 30 years ago. This model was designed to have its wing covered in lightweight silk or silkspan that is clear doped, balsa surfaces are clear doped too with dope color trim, which is light. The otherwise powerful Cox Tee Dee .020 had difficulty lifting it off the ground, even with the lighter weight Ace rudder only Pulse Commander system. It became a display, until broken in a move. Now I look back, I probably could have put a Baby Bee .049 and successfully flown it. Regarding comments on the spar, in the early 1960's, there wasn't any plastic iron on coverings. Covering of choice, silkspan or silk shrink drum tight, provided needed rigidity and strength. Knowing more now, with Monokote, I would have probably folded the wings flying on something more powerful like an .049 (even with the prop on backwards). The newer plastic coverings don't have that strength, hence the hardwood wing spar makes sense to beef up the structure. If I were to build again, I might consider a new lightweight tissue style synthetic covering like Polyspan / Coverite Coverlite or the new lightweight park flyer plastic covering like Coverite Microlite.
ghostler - 07/12/2016
I built two Nomads from kits and never added an engine to either one. I flew them off a gentle slope and they did great with a gentle breeze with a Citizenship LT3 receiver and Bonner escapement. I kept breaking the fuselage at the pod-boom connection where there is a stress riser. I'm currently building two more Nomads and have already included a reverse curve segment to the fuselage side panels at that location to eliminate that problem area.
Bill Kuhlman - 16/03/2021
Add a comment