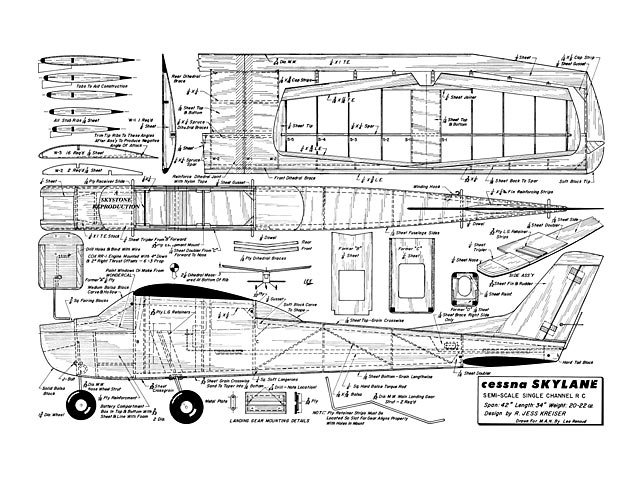 Quote: "If you like a realistic, semi-scale 1/2A single channel radio control plane that is nearly indestructible and of more importance, an excellent flier that stunts very well, our Skylane is for you. Cessna Skylane, by R Jess Krieser.

The Cessna Skylane bore the distinction during 1963 of being the second-best selling private airplane in the world, according to sales figures compiled by one of the leading aviation journals. The Skylane was second only to a lower-priced member of its own family, the Cessna 150. While not the latest in the long line of aircraft hearing the name Cessna, the Skylane is a fairly recent addition to the large family of distinctive monoplanes that had its beginning nearly forty years ago, when Clyde Cessna disagreed with his early business partners over aircraft design. and went his own way.

Back in 1924, Clyde Cessna joined forces with Walter Beech and Lloyd Stearman to design and build airplanes. They formed an organization which they named the Travel Air Mfg Company, and their first design was a biplane which has become one of the world's great biplane classics - the Travel Air 2000. The three partners were fabulously successful in their venture, and soon their biplanes were popular from coast to coast. However, in 1925, Clyde Cessna wanted to design and build a monoplane, and Beech and Stearman disagreed. They wanted to stick to biplanes. This didn't bother Cessna, however, since he merely turned to designing and building his monoplanes in his spare time, as a side-line. His second design was quite successful, and became the first commercial monoplane to fly from California to the Hawaiian Islands. This launched Cessna, and in 1927 he left Travel Air to form his own company, Cessna Aircraft.

From the very beginning, Cessna's designs were unique, and incorporated design concepts which were quite ad-vanced for their day. His airplanes were characterized by clean lines, and an absence of bracing struts and wires. Cessna was one of the early believers in the use of cantilever design and construction to clean up the design and reduce drag. The entire empennage assembly was cantilever, as was the wing. The earlier designs had multi-strut landing gears, but these soon gave way, too, to the cantilever principle, and by the early 30's, Cessnas began to sport a single strut landing gear that not only cleaned up the looks, but improved performance as well. Unlike Fokker, who relied on plywood skin covering on his wings for their cantilever strength, Cessna used fabric covering, but braced the wings internally by an ingenious method utilizing steel strapping such as that used so extensively today in materials handling and packaging.

While the present day Cessnas bear little visual resemblance to their early ancestors, they still follow the same basic design concepts of clean, good-looking design, coupled with excellent performance. These two principles were also followed in the creation and design of the single channel Skylane presented here.

When I first conceived the idea for this ship, I wanted a 1/2-A sized single channel ship that would be capable of the stunt pattern flown by the larger, competition type rudder-only ships. I wanted a ship that would stunt well, but be tamer to fly than the competition designs, and one that I could pack in the trunk of my car to take along on weekend trips, and fly out of relatively small fields. I also wanted the ship to sport a pleasing appearance, and look like a real airplane. And since I was a long way from being an expert rudder-only pilot, I had to have a stable, forgiving airplane that could absorb pilot errors. And for those occasions when I goofed too badly, the ship had to be tough so that I wouldn't be spending half of the good flying weather repairing the ship.

I worked out the arrangement of forces that I thought would provide what I was after, and then developed the esthetics of the ship- so that it would look like the Cessna Skylane. For that reason, I regard this as a semi-scale air-plane. I also tried to keep construction as simple as possible, so that the ship could be built quickly. (Another reason for the simple construction was that my son, who was eleven at the time, took a liking to the ship and wanted to build one. So I had to keep the construction simple to keep him from becoming discouraged at wanting to build models.)

The ship has been a real pleasure to fly. I have had more fun and flying enjoyment out of this ship than any other radio control model that I have ever built. It is very acrobatic, and with a Cox RR-1 up fromt for power, will do three loops on a 2-turn spiral dive. About the only thing it hasn't done yet are tail-slides and touch-and-go's. If fitted with a throttle, it would probably do these, too.

Last summer, while testing the original Skylark 56 (oz1842) with Carl Goldberg, before the ship was kitted, I took the Skyline out one day and let him fly it. I had a hard job getting the transmitter back from him before the day was over. Carl thought it one of the most enjoyable ships he had ever flown.

As far as ruggedness is concerned, in a matter of two weeks I spiral dove the ship under full power straight into the ground five times! Twice it was due to goofs on my part, and three other times it was due to being shot down by interference. (I have since switched to superhet for single-channel flying.) Our flying site is a Merion Blue Grass sod farm, where the soil is much like hard-pan clay. This is not the gentlest of tarmacs for straight-down power-on landings. But in every instance, the ship had no more damage than a few dents on the nose blocks, and was back in the air within ten to fifteen minutes..." 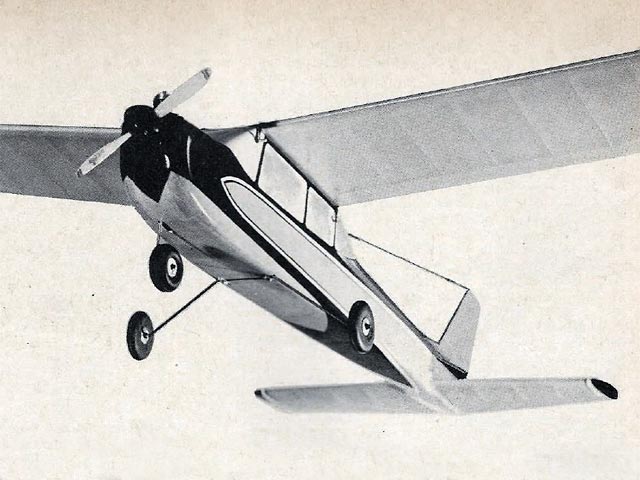 Hi, Steve. Yesterday, I saw you had published the plan of the Cessna Skylane by R. Jess Krieser. Some months ago, I made one CAD redraw of these plan, therefore, I've decided send you that copy. Greetings,
mikesierra67 - 22/01/2015
Add a comment