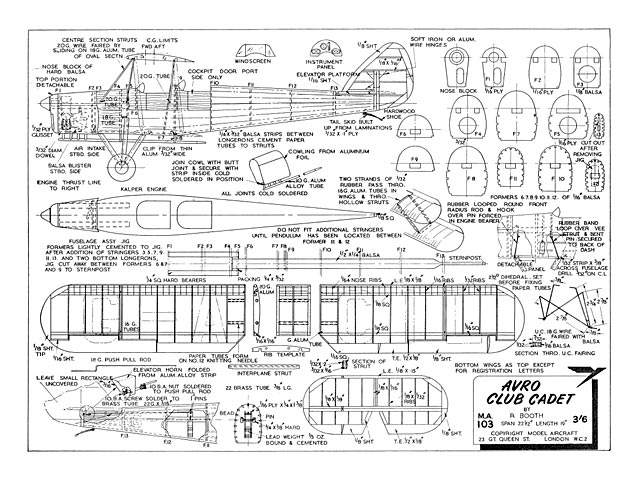 The '638' was one of several versions of the Cadet designed and produced by AV Roe & Co Ltd of Manchester, during 1932.

The prototype Cadet - type 631 - was a heavily staggered two-seat biplane fitted with a 7-cylinder Armstrong-Siddeley Genet Major 135 hp engine, and was very similar in appearance to the standard RAF Trainer of that period, the Avro Tutor ('621'), although the '631' had amuch lighter airframe than the Tutor.

Fuselage. Build up the fork-shaped fuselage jig from 1/3 x 1/4 in balsa, 1/4 in square hardwood and 3/32 x 1/4 in balsa as shown on the plan. Carefully trace the various former shapes on to thin tracing paper and cement these tracings on to the appropriate material specified on the plans. Cut and slot as indicated.

Lightly cement the formers to the jig and when dry add two bottom longerons and stringers Nos. 3, 3, ', 9, r t and 1.3 (all 1/8 x 1/16 in). Ensure that former No.7 is inclined at the correct angle before commencing attachment of stringers and longerons. When dry cut away jig between formers Nos. 6 and 7, and No.9 to stern post. Add nose block and 1/32 sheet ply gusset under engine bearers.

At this stage it is necessary to construct and fit the pendulum. Commence by cementing the two 1/4 x 1/8 in members between formers Nos. 11 and 12. Be particularly careful that the balsa used for these two members is really hard. The actual pendulum is extremely simple to assemble...

The author's machine was powered by the Kalper 0.32cc diesel, and the use of this engine is recommended. However, any of the other small motors up to 0.5cc such as the American K&B 'Infant', Allbon 'Dart', etc., would be a suitable alternative. Irrespective of the engine fitted, it is essential that the thrust line is offset 3 deg to the right..."

Article pages, text and pics, thanks to KeithF. 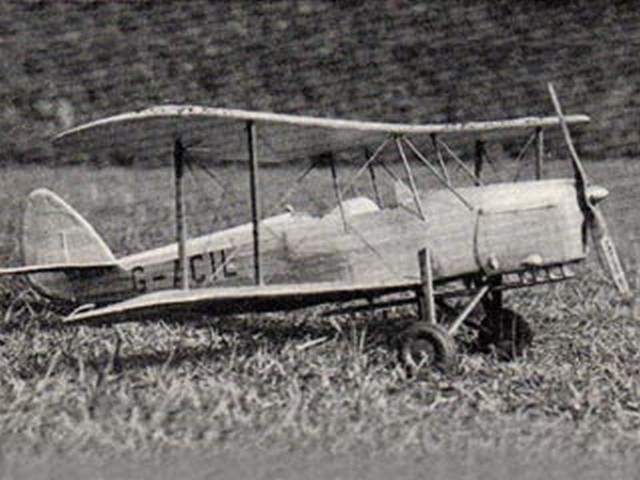