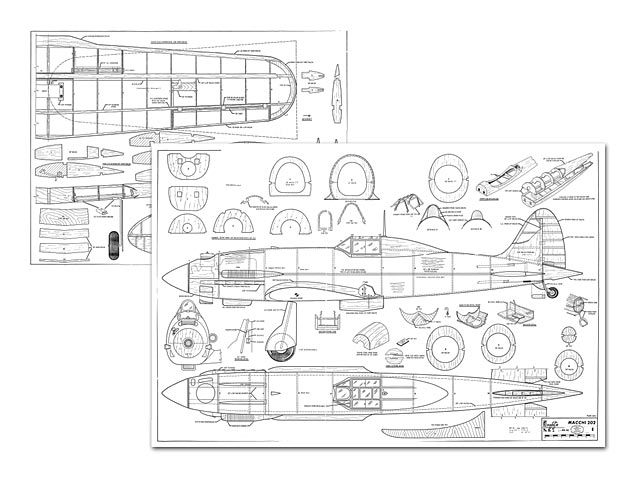 Quote: "Macchi 202 by Dennis Bryant. Winner of the 1963 British Nationals, the Macchi 202 is a must for the serious, advanced scale builder demanding absolute fidelity to scale.

In 1963 I purchased a copy of Famous Fighters of World War II, Volume II by William Green, which contained ,among other things, photographs and three view drawings of the Macchi 202. I fell for the latter immediately, deciding that it would make an ideal subject For R/C scale. I had previously known about the Macchi 202, but had never seen a decent three view drawing of it until I had obtained a copy of Famous Fighters. Until then I had not realized what a handsome airplane it was. To my eyes, it rivals the Spitfire and Mustang for the title of best looking fighter of World War II. and it is in the hope that others will agree with me in this, that I have decided to submit this plan and article.

I soon had the plans drawn and the model under way, as I was anxious to have the model flying in order to show that there were other possibilities for WC scale than the ubiquitous models of the Spitfire, Mustang and P63 that everyone seemed to be flying at that time (1963).

The model was first test flown by Harry Brooks on a very cold and windy 'Summer' day, and apart from over sensitive ailerons, no trouble was experienced, and I knew than had a winner. The next weekend, after having modified the gearing of the ailerons, I flew the model myself. I was delighted to discover that it was very pleasant to fly and as such, emulated its full size counterpart.

The 1963 British Nationals was but six weeks away and I decided to enter the Macchi 202 for the R/C Scale event. On the day of the Competition, a howling gale was blowing which grounded everything but R/C multi. The scale entry was quite large that year but they were mainly single channel types and it would have been suicide to fly them in the high wind. Only three of us, who had multi, elected to fly, and at the end of the event, I was overjoyed to discover that I had won by a reasonable margin.

To those of you wishing to build this model. I would like to point out that I am presenting it exactly as built in 1963 except for the engine which was a Veco 45. If I were to build this model today, it would have retractable u/c, bolt on wings and frise ailerons but I thought it only fair to show the model as built by me at that time and leave the improvements to those with an experimental nature.

As it is not a beginner's model. there is no point in making this a stick-this-piece-to-that-piece type of article. There are one or two points, however, that I would like to call to your attention.

To those of you who have not made a planked fuselage before. l would like to point out that they are not as difficult as they look. In addition, they are very light, very strong, and when made on the crutch system, it is impossible to end up with banana shaped fuselage as often happens with slab siders. Try to make the planks a good fit without too many gaps. I find it a great help to bevel the edges of the planks with a sanding block before assembly, any remaining gaps then filled in with small pieces of balsa. The whole thing will look a frightful mess until the final sanding down with a sanding block. I always find it a most enjoyable experience to see the fuselage taking shape through the sanding dust.

Finally, cover the fuselage with nylon and treat with your favorite filler. The steerable tail wheel is not strictly necessary, but I found this a convenient method of connecting the pushrod to the rudder without the usual ugly pushrod sticking out of the top of the fuselage.

Next, we come to the wing. This is a completely conventional sheet covered structure and requires no particular instructions, but I would like to confess to a deviation from scale of the ailerons. These should go right to the wing tip. but with the wsize of hinge used, this would result in an unsightly V shaped gap at the wingtip. So if you want to be dead scale you will have to use a scale type hinge or put up with the gap..." 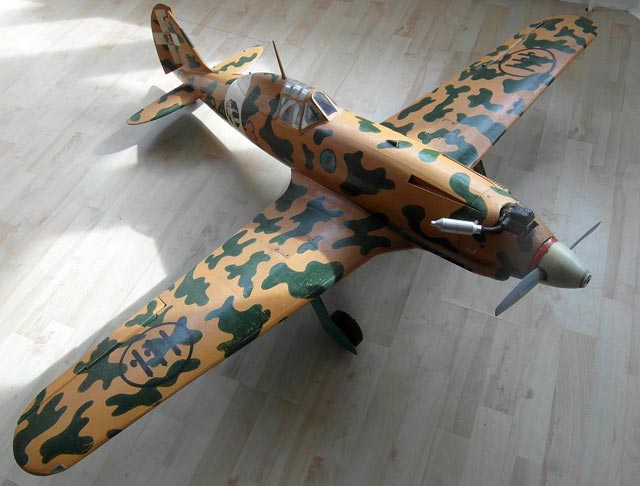 I am embarrassed to say I cannot remember who sent me this (it was a couple of months back, I'd guess) and I have no record of where this scan came from. If you recognise this plan because you sent me it, please do let me know, so I can add a credit.
SteveWMD - 18/01/2015
Hi Steve,please check the plans of Mr Dennis Bryants good looking Macchi 202 Folgore again. I think that this are copys of Italian Modeldesigner Massimo Zuffi from Milano. Indication notes... MODULO-R.C.Modeler Design Ordine Degli Architetti Dell Emilia-Romagna Numero 1 Macchi 202 Scala 1.7 Gen.1983 654 Architetto Massimo Zuffi. Best wishes Regards,
Pascal - 24/01/2015
I don't think there's any doubt this is a Dennis Bryant design from 1967. The original plan refers to 'dress snaps', an old-fashioned term for 'press studs' which Dennis also uses in the associated build article. The Italian version of the plan is an excellent re-draw dated 1983, which omits the design's (British) prize-winning record as shown on the original plan (2nd Place 1963 Bristol Meet etc). I assume Massimo Zuffi was claiming copyright merely for the re-drawn plan, not the design itself... Regards,
SBurling - 24/01/2015
Dear Mr Burling, I think the same way... Regards,
Pascal - 25/01/2015
Hi, I've built TWO models from your plans, AA1950 mm. They fly superb. Here in landing approach [pics 005,006]. This one is the plan: Macchi 202 (oz6255) by Dennis Bryant from RCMplans (ref: 221) 1967 61in span, + 25% increased. Thanks, I love Outerzone :))
Angelo - 24/11/2020
SBurling, you are absolutely right. I built mine from the original plan [main pic, 008, 009].
Gino - 15/03/2021
Add a comment