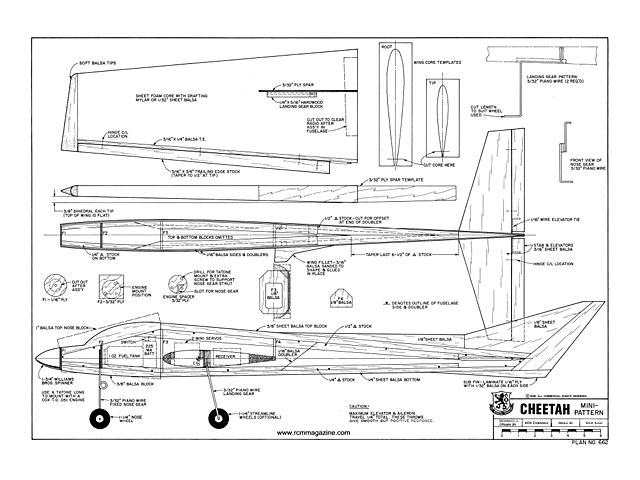 Quote: "Full throttle, flat out, this Half-A machine flies as good as it looks, equaling its big brothers in performance, as well as eye appeal. Cheetah, by Ken Eubanks.

In these days of the energy crisis, this is one pattern ship that doesn't require a gallon of fuel for an afternoon of flying. 'Cheetah', as everyone knows, is Southern for 'cheater', which is what this design does best, If you want a fast, sleek pattern ship, but hesitate to lay out the cash for a good 60 engine, a 4 or 5 channel radio, and $50.00 worth of balsa and hardware, then cheat! Cheetah uses a Tee Dee .051 running flat out - who needs throttle?

Probably the least necessary of the four necessary controls is rudder, another channel Cheetah doesn't have. The main use of rudder is during ground handling, and without throttle, ground handling is something else Cheetah doesn't have. The plans show a tricycle landing gear which is optional and is good for protecting the belly on landings. Cheetah will take-off from a smooth mn-way, and the wheels don't slow it down
appreciably, but the small wheels don't roll very well in grass. If you fly off grass, you can forget the landing gear and install a skid as shown in the photographs.

Now that you know what Cheetah doesn't have. I'll tell you what it does have. Elevator and aileron control is really all the control necessary on the Cheetah, and it's definitely ahandful. Some of you may want to put in throttle and rudder, but the power lost through an exhaust restrictor throttle and the extra weight of two more servos would seriously affect Cheetah's high speed performance. At 1 pound, 7 ounces, Cheetah's performance is nothing short of fantastic. Keep it simple and stay with aile-ron and elevator. Stop and think now, have you ever considered trading your two-stick transmitter for a single stick? Build a Cheetah and you have an automatic single-stick conversion, and you don't have to
worry about a rudderknob.

The prototype Cheetah uses a Dorfller receiver and decoder available through C & C Avionics, 6831 Hubbard Drive, Dayton, Ohio 45424 in two or four channel kit. Two D & R Bantam or World Engine 5-9 servos and a 225 mah flat battery pack, also available from C & C, complete the guidance system. If you plan to use another flight pack, it's important to check its fit before starting construction. It may be necessary to fatten the fuselage a bit to accomodate your particular radio.

If you went to Toledo and have a sharp eye, you may have seen the prototype Cheetah on the original design table hiding under the wings of the 1st and 2nd place ships. Although Cheetah did not place in the competition, and was not the most impressively unusual design, I feel Cheetah repre-sents a new, practical design concept in that it is a compact, inexpensive high performance design that fills a need.

My inspiration for the Cheetah, aside from being economical, was a season of flying aileron and elevator Jr Falcons (oz8144). These little screamers have been popular in our club, the Dayton Wingmasters, for several seasons for club pylon racing. If you don't build a Cheetah, at least try a Jr Falcon with zero incidence, a Tee Dee, ailerons, and elevator - it'll surprise you. Cheetah uses the same basic set-up and size, but is designed for smoother maneuvers and has sexy curves instead of boxy corners.

Now go out and buy yourself a pint of fuel and build yourself a Cheetah. Better get a fifth of your own fuel to celebrate the maiden flight - you'll be pleasantly surprised.

The prototype Cheetah uses a foam wing sheeted with .0035 thick drafting Mylar. This material has a frosted finish on one side and is slick on the other side. The slick side is sanded to break the glaze, then Formula II Hobbypoxy is used to stick it to the cores. The frosted side gives good adhesion with K & B Superpoxy. Mylar is strong, cheap, and easy to use, but with epoxy it gives a slighiy wavy surface in comparison to balsa sheeting. Perhaps contact cement would be better.

Cheetah's fuselage is built up of 1/16 in balsa sides, triangular balsa corners, and 3/8 and 1/4 in balsa sheet top and bottom. This gives a heavy, ugly box, but then the transformation begins..." 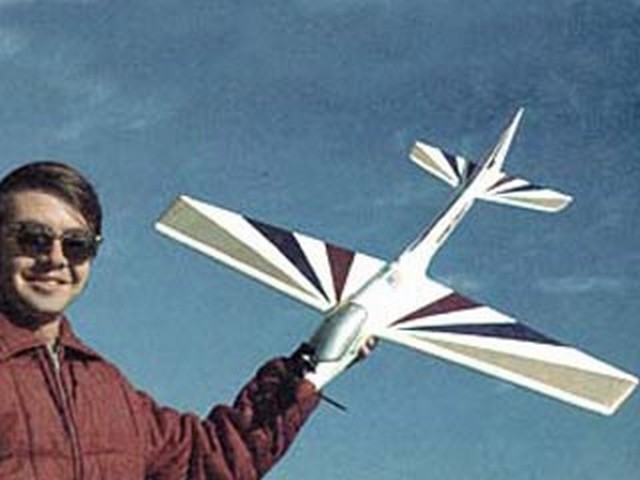