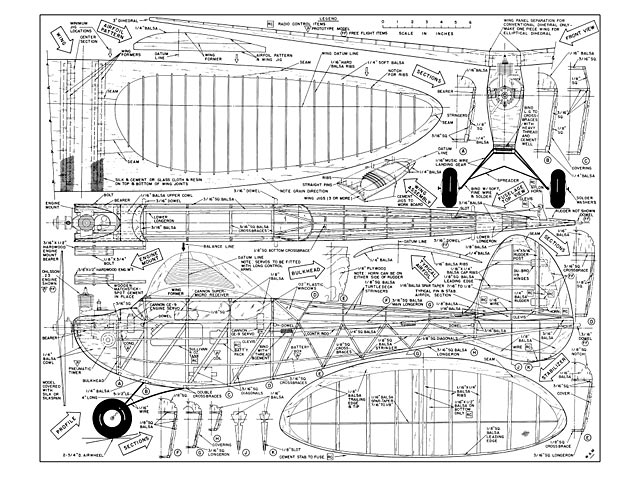 Quote: "Old Timer Special: Part I, the Answer. Two OT aircraft featuring the famed Murray/Ritz wing. The 'Answer' was one of MAN's top designs in 1940."

WING STRUCTURE and airfoil section are the heart of any free-flight model design. During the second half of the '30s, model aircraft designers began to revise their thinking about airfoils. In an effort to combine fast climbing with low rate of sink gliding, the long-popular Eiffel 400 and RAF 32 were gradually being replaced with NACA 6409, Gottingen 81, Gottingen 417A, and similar airfoils. The trend was heading toward single-camber or single-contour airfoils, in which the lower camber would be virtually identical with the upper camber. The basic problem with single-contour airfoils is the absence of depth or thickness which tends to give the wing less structural rigidity than the thicker airfoils, especially in torsional loadings. Some recent USSR free-flight and glider airfoils again resemble the single-contour designs studied in the '30s.

In 1937 one of the many famous members of the 'Brooklyn Skyscrapers' model plane club developed a successful single-contour wing. Gordon 'Scotty' Murray claimed to have gotten the nucleus of this idea from a Chicago modeler, Jerry Ritz, and Scotty called it his Ritz wing. However, Gordon Murray developed the wing, aerodynamically and structurally, to such perfection and used the wing so successfully that it has always been called the 'Scotty Murray wing' or airfoil. He applied very sound engineering principles and came up with a winner:

1. He increased the camber curvature for increased lift and to form a deep triangle between the high point of the camber and the leading and trailing edges for greater strength.

2. With an airfoil so thin that it could not accommodate spars, Scotty applied the hollow spar theory that the greatest strength of a cross section is found on its perimeter. He made his wing from thick, soft, sheet balsa and cut away the center for ribs and covering, leaving the strength to the perimeter.

3. Aerodynamically and structurally, an ellipse is the perfect shape for a wing. This is normally avoided like the plague by model builders because of the difficult design and construction problems it presents. Murray overcame these problems with his novel wing construction, in which the planform could be cut into any desired shape, and with his constant-thickness airfoil the various chord lengths posed no problem. So Scotty made his single-contour wing elliptical in planform.

4. The ideal dihedral shape is also an ellipse, but the complex construction required again makes it prohibitive. Polyhedral is an attempt, using conventional construction, to duplicate elliptical dihedral. As Gordon's flying buddies, including me, began using Ritz/ Murray wings, it was noticed that as the covering pulled tighter due to the sun, etc, the dihedral increased somewhat and the wing curved gently, resembling an ellipse. This observation started a series of experiments that led to elliptical dihedral in Murray/Ritz wings. This will be described in Part II with my 1939 Hell Razor (oz8907) that also used the single-contour wing.

The Answer and virtually identical Topper (oz4818) designs were Scotty Murray's most famous creations that used the single contour airfoil [Murray wing, aka Ritz wing]. Both were consistent contest winners, a fact he attrributed to the wing design. The climbing ability of these designs was a vast improvement, but was still not really sensational because of the exceptional drag created by the single-contour airfoil. Yet, without pointing their noses skyward, the designs gained a very respectable altitude during the limited engine runs. The glide, however, was truly spectacular, with the slow gliding speed and low rate of sink afforded by the single-contour wing design. Even in still air on a cloudy day, Scotty's Answer kept circling in slow, lazy circles over Long Island long after the conventional designs had landed!

The Murray/ Ritz wing had received considerable attention throughout the aeromodeling fraternity and Gordon Murray continued to perfect the single-contour wing until war erupted in Europe in the Autumn of 1939. Gordon was Scottish and when the situation appeared desperate for Britain after the fall of France, he felt the need to go to the aid of his country. Scotty joined the Royal Canadian Air Force. By the time he had completed his fighter pilot training, intense aerial activity had spread to the Mediterranean and Gordon found himself flying a Spitfire, defending the island of Malta. During the fierce air battles over that island bastion, Gordon's plane received a fatal hit and he crashed to his death. Hero, gentleman, exceptional friend, and most talented model plane designer, Scotty Murray will forever be remembered as an outstanding member of the human race.

With the advent of Pearl Harbor, Scotty's remaining buddies, including Maurice Schoenbrun, Sal Taibi, Leon Shulman, myself, and many others, went on to serve our country and by the time modeling activities were resumed after the war the Murray/ Ritz wing was virtually forgotten.

Murray's designs became famous during his lifetime and he soon needed an inked drawing of his Topper/Answer design, but could find no ink draftsman among his buddies until I volunteered to do the job. As the youngest member of the group, I considered it an honour to prepare the drawing for this modelling great. After serving its purpose, the drawing was returned to me and I still have it as a prized possession, although tattered and moldy.

Update 14/06/2017: Have re-titled this plan now as the 'Answer' thanks to Ray. The heading text on the plan saying 'Scorpion' seems to be a later addition, done in error.

Note the Answer design was also the basis for the Keil Kraft Scorpion (oz5785) model, which used more conventional construction on the wing.

Update 16/06/2017: Replaced this plan with a much clearer version, thanks to Circlip. 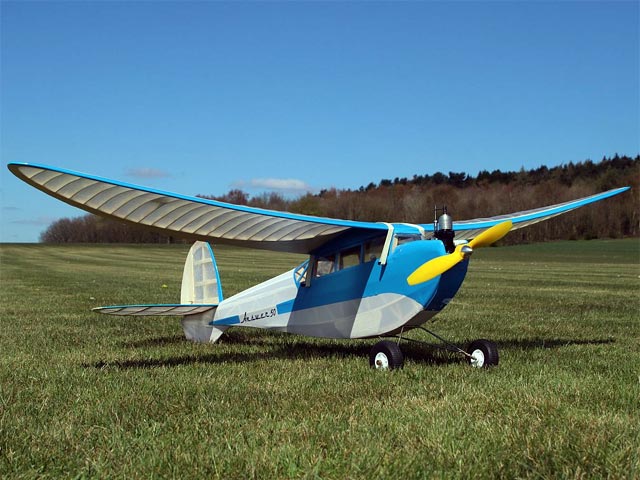 Great scan, thanks. Nice to be able to see the detail on this plan, now.
SteveWMD - 16/06/2017
Thank you so much for the upload of the Article featuring the "Answer". There is however a "Part 2" to this article that appeared in MAN the following month. Is it possible that someone might have this second part to the article? I think the "Answer" was one of the best flying Vintage FF IC Cabin planes I have ever had the privilege to fly (with RC assist).
Bernard_Petro - 27/06/2017
We've heard from a reliable source that "part 2" of the Answer article is actually a plan and construction article for a different design which also used the Ritz wing and is called Hell Razor. We hope to be able to add the plan and article for this model to OZ in due course.
Mary - 28/06/2017
There is a really nice thread on RCGroups for this model, built by Tim Hooper, see https://www.rcgroups.com/forums/showthread.php?3832863 with excellent photos of the finished model, sampled here on this page [main pic, 003].
SteveWMD - 19/04/2021
Really great to see my model featured here! At 23oz, it's a perfect match for the Indian Mills 1.3RC diesel. Leisurely take-offs, and low, slow fly bys.
Tim Hooper - 13/05/2021
Add a comment