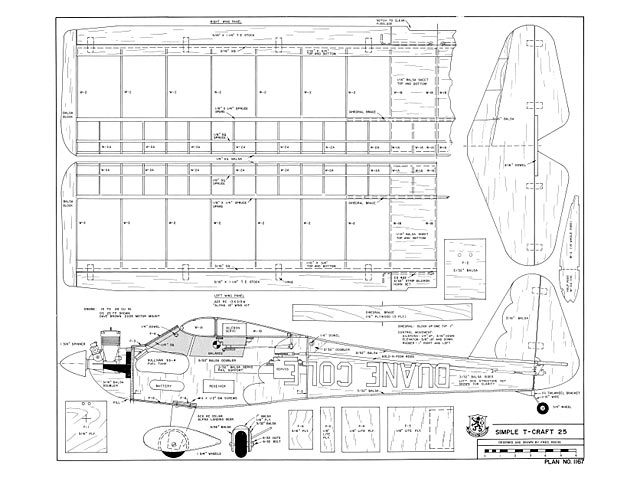 Several years ago, I designed and published in RCM several 1/2A models called the Simple Series. The Simple Citabria (oz7278), Simple Cub (oz6426), and Simple Duster (oz9871) all used the Ace R/C 35 in mini foam wings and Cox TD .049 engines. Ace R/C continues to sell the wings and a complete hardware pack for these models. The fuselages had scale-like side views, but were just simple balsa box structures. The Simple Series models were cute, fast, and agile, and could be built in a few evenings for a few dollars.

The Simple T-Craft 25 is the same concept, just enlarged a bit to handle .15 - .25 sized engines. The fuselage is a simple balsa box that looks like a Taylorcraft from the side. I chose the Duane Cole paint scheme, as the airplane has flown in many airshows and is readily recognized as a Taylorcraft. The name, Duane Cole, is written right side up on the right side of the aircraft and upside down on the left side. He wants people to be able to read his name as he passes the grandstand whether he is upright or inverted.

The basis or the earlier 1/2A series was the Ace R/C mini foam wing set which greatly simplified the models. For the Simple T-Craft 25 I wanted a commercially available wing kit. The wing kit would provide die-cut ribs and all of the spars and other wood parts needed in a single package. I chose the Ace R/C 'Alpha 15' wing because it is available separately as a wing kit for only $12.95, including the plan and instructions to build it. The wing has a thick semi-symmetrical airfoil that allows the model to fly inverted as easily as right side up. For those not wanting to buy the wing kit, the wing plan and parts are included on the plan.

While the original 'Alpha 15' was designed by Tom Runge to be a trainer or sport model with a .15 engine. the T-Craft is intended to be a lot more exciting. The T-Craft is the same size as some of the .20 sized trainers and has the same gentle characteristics at reduced throttle ssettings. Although the T-Craft is a high wing aircraft and looks like a trainer, it is quite fast with a .25 engine. It is, what I call a 'hot dog' type model, small, quick, and fully acrobatic, a model to tear up the sky.

The secret of this good time model is plenty of power and light weight weighi. The T-Craft 25 only weighs 2-3/4 lbs ready to fly.

Construction. The T-Craft 25 is quick to build, too. The wing builds easily without some of the usual complicating steps and the fuselage is as simple as possible. Begin by making dtwo fuselage sides from 3/32 medium balsa..."

Update 01/04/2015: Replaced this plan with a clearer copy thanks to Balsaworkbench and theshadow. 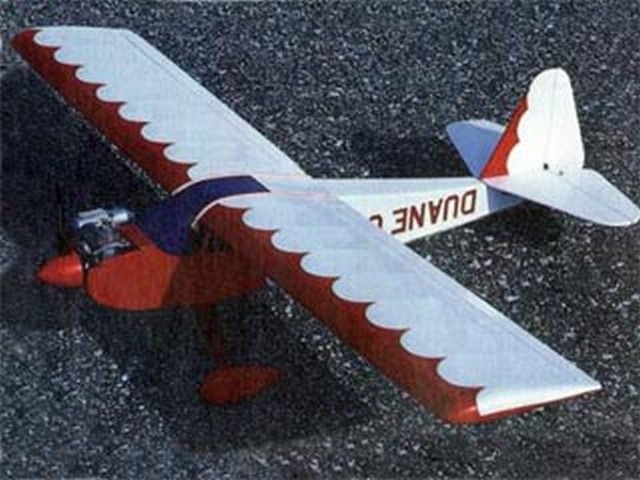 Built from the RCM plans, the Simple T-Craft is decked in Monster garb, powered by a Magnum .25, and covered with monokote [see more pics 004, 005]. Very easy,quick, and inexpensive to build. The perfect project for the first time plan builder. It flies great too!
JohnnyB - 25/08/2015
Steve, Thought I'd add my build images of RCM Plan 1167 that I converted to electric [see more pics 006-008]. Built per plan except added bolt on wing and Electric conversion (Emax GT2815/07 1100KV motor, APC 10x5E prop, 3S-2200 batteries). Flies great with this combo, get about 14 minutes with throttle management... Thanks for all the hard work to keep the site up and running.
RonaldSwenson - 01/10/2015
Add a comment