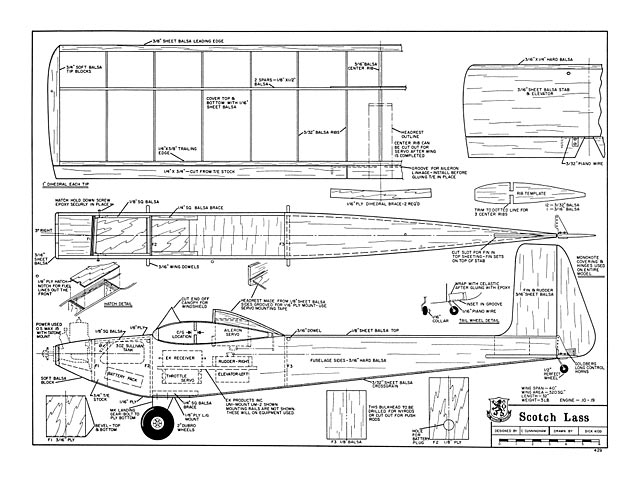 Quote: "Scotch Lass. An easy-to-mild, run-of-the-mill shoulder wing - until you go to fly it! Three vertical snap rolls from level flight with a .15.

With regard to the design philosophy, the basic reasoning behind this little shoulder wing model was three-fold: First, it was to be a model that could be flown in closely confined areas such as school grounds, parking lots, etc. Second, it had to be easy to fly so that it could be used to introduce my young son to RC (and in so doing, to prove out the worth of the EK Buddy Box system). Third, it had to be economical, easy, and fast to build.

If you go to an aircraft too small in size it becomes difficult to mount the standard miniaturized equipment in its interior. Additionally, if you get it too small the weight-to-power-to-wing-area factor goes way up, making for a hard-to-fly aircraft. The Scotch Lass is a compromise on these points. It is ssmall enough to fly nicely with an OS Max .10 yet it will take an EK Log III radio mounted on its standard servo/receiver board with room to spare. A Max .15 will yank this little bird about with lots of zip if you just simply have to have lots of power. The shoulder wing set-up was chosen because it allows for a more forgiving aircraft, and is also less prone to get torn up on a hard landing. With this little ship you can buzz around your local school ground, get in and out of tight corners, and generally live it up close to home. Please, don't do this if you are a beginning pilot! Get out in the country, or at your club field, where you can have lots of room to allow for your natural mistakes without endangering others.

Country flying was another reason for selecting the shoulder wing configuration for the Scotch Lass. With a shoulder wing, you can hand launch your aircraft from any type of field. There is no need for a paved runway, or even a smooth grass runway. Of course, your landings might become a bit hairy if the grass is over your head, but it sure saves on props!

lf you are a beginning pilot, or you are using the Scotch Lass to teach someone else to fly, shim the leading edge of the wing for one degree positive incidence and set the control movements on all surfaces to about 1/8 in full-up and down elevator; 3/16 in up and down on ailerons; and 1/2 to 3/4 in right and left on rudder. This way you can gently fly about the sky without over-controlling. Be sure to use the smaller size engine. If you choose to eliminate the ailerons and fly with rudder, then the amount of movement given will be enough for this mode of flying.

lf you can't build the Scotch Lass in just a couple of evenings for a total outlay of less than $10.00, cash-type money, then perhaps you'd better take up tiddley winks because you're in the wrong field! The fuselage goes together in nothing flat, and you can build the wing almost as fast. If you favor foam wings, as I do, then you can chop out a wing, skin it with dime store cardboard, glue together with Devcoo 5-Minute Epoxy, and be ready to paint in just a couple of hours..." 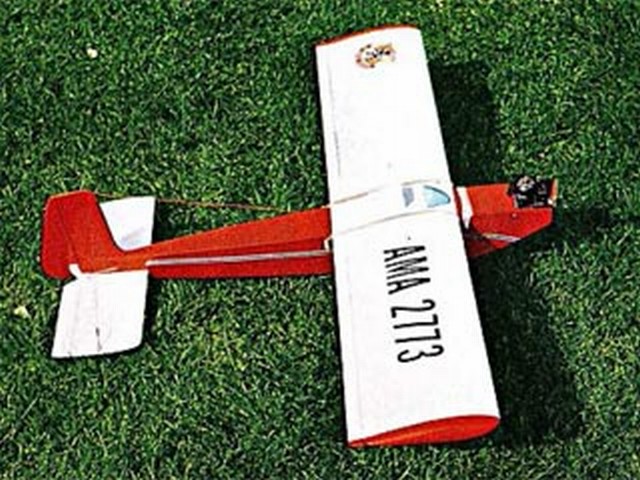 Hi Steve, Herewith some pix [see more pics 003, 004] of my newly completed Scotch Lass (surely that should be Scottish Lass??) Two comments: Chuck used a foam wing on the original but the plan shows a built up wing, it needs a bit more beefing up. And built as per the plan it was quite nose heavy with the Fuji .15 up front. Probably because I used lighter servos that the original. Cheers
Marc - 23/02/2015
Hi Steve, I flew my Scotch Lass this past weekend. In his comments, Chuck Cunningham said that this little beast would do 3 vertical snap rolls, well he wasn’t far wrong! I fly at just over 5000’ ASL and with my 1973 Fuji .15 I pulled the Lass into a vertical climb and managed 2 snap rolls and managed to do just about anything else in the book. She sure keeps my adrenalin flowing. Try it. You’ll like it. Cheers
Marc - 10/04/2015
Add a comment