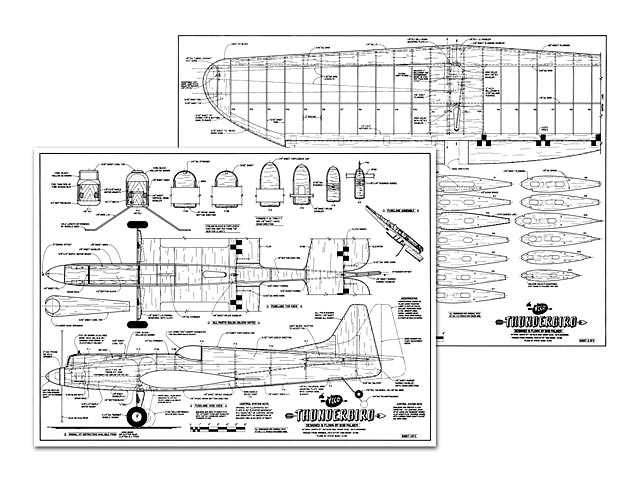 Quote: "Original Veco Thunderbird. From the first flight it worked fine. Each flight demanded another and another. Bob Palmer's classic Veco Thunderbird continues to provide a special kind of Stunting pleasure.

SINCE 1983, as regular readers of Model Aviation know, I've been flying and publishing various modifications and updates of Bob Palmer's designs. It was at that time that I came to feel as though I'd gone about as far as I could with the various Nobler (oz6212) derived designs. I was looking for something classic - something that would get me away from the then-current idiom of Stunters exemplified by the Stiletto (oz6665), Genesis (oz7572), and other Jet-type designs. Bob Palmer's designs, most of which were kitted by Veco, proved to be just the ticket - timeless in their aesthetics but also Nats winners.

The Thunderbird design was never published (in any version). Instead it went directly into production as a kit. Curious, I wrote to Bob in an effort to learn just how he happened to come by the design. Here's what he had to say:

I went to work for Lockheed in 1951 and at the same time built the Smoothie (oz480). I designed its wing and airfoil to help it fly in the wind. Since I worked in the wind tunnel, I had the opportunity to observe and to talk to the engineers about turbulence that was apparent on wing tips and at the high point of the airfoil. All the engineers said the British Spitfire had the most efficient wing shape; so I went to the elliptical tip shape and airfoil with an aft high point to reduce the turbulence. When I first flew the Smoothie, it sure lived up to its name. It was definitely smooth - even in high winds. It wouldn't turn tight, though, and I was disappointed.

Later, when the Pattern requirements changed from a 60 to a 45 degree elevation, I needed a new and better plane - one that could make the tighter turns now necessary. This plane was the first Thunderbird. It had a thicker and better airfoil and a better planform. The earlier design had had an Orwick .32 on glow. From the first flight, it worked fine. Each flight demanded another and another..." 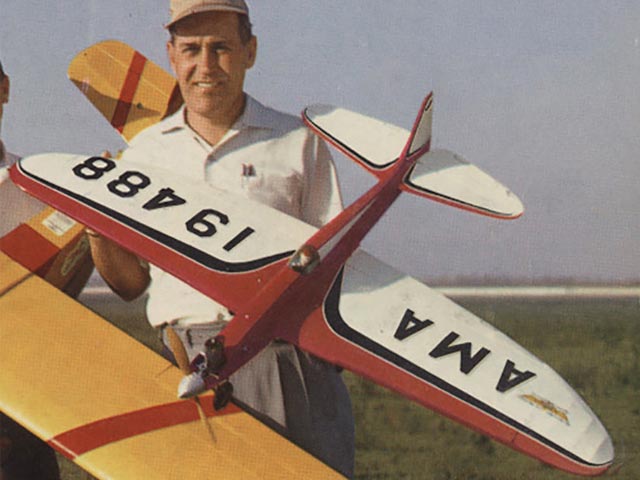 When these plans (OZ 6238) were published in January 1991 Model Aviation, this was the accompanying article [supplementary file].
RFJ - 01/06/2017
the Thunderbird design borned around 1953 and was developed in different versions, note that in the top photo the 1957 T-Bird is different from this plan. Different nose and three wheeled Landing gear. In This version Bob experimented brake on front wheel to accurately stop the model at the landing in a painted circle on the pavement. Brake was connected to the down elevator. This accurate landing rule was soon abandoned by the official stunt program.
pit - 09/10/2020
Bob Palmer sure could design them pretty, perhaps the lady in the middle photo inspired him. The model she's carrying appears to have yet another variation, the engine is inverted and thrust line pushed higher. The upright version as in the plan looks somewhat out of fashion, like a Howard DGA-3 Pete as in oz5999.
DGA, by the way, meant Damned Good Airplane, that was what one initial customer - a bootlegger from Houston Tx - called his first plane! This DGA and longer version were trademarked; this was not all bravado, Ben Howard had every good reason to be proud, another of his designs was the DGA-6 Mr. Mulligan :-)
Miguel - 12/10/2020
Add a comment