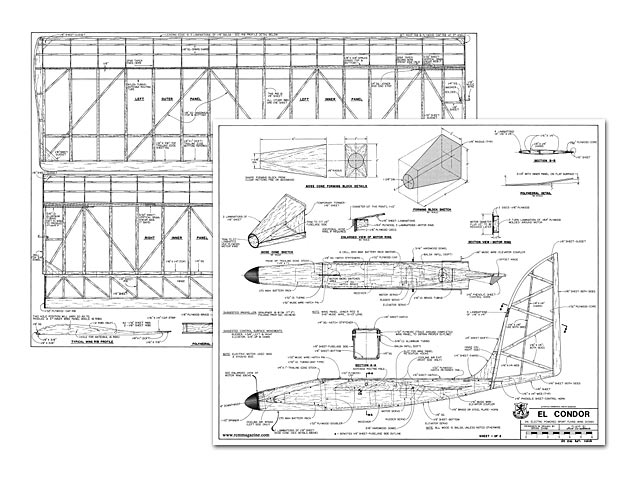 Quote: "These flying wings easily out-perform my conventional powered gliders, and although you might expect them to be difficult to handle, they are not. Steep turns at low altitude are just as safe, if not safer, than with conventional models, due largely to the low aspect ratio I suspect. After a season's flying with both models, I can say that I enjoy flying these wings more than my other models.

I have been flying models for about 45 years now, and R/C since the days of valves and 90 volt batteries. I have nearly always built my own designs, and for very many years now my interest has been in gliders and sailplanes, particularly in thermal soarers. About ten years ago I began to be affected by Multiple Sclerosis and this slightly limited my activities, I then took to electric flight at just about the right time, as it happened, as electric performance was then improving rapidly.

My first success was with a Jabberwock (oz8000) (RCM Plan #932) reduced to 60" span and this still flies regularly. I went onto design a series of three conventional electric soarers of increasing performance.

Before describing El Condor, let me to anyone who is not as mobile as they might wish, electric flight may be ideal for you, as it is for me. Near silent climb to soaring altitude without the hassle of winches and tow lines is, of course, wonderful for all. In October and November 1978, RCM published a construction article by Roger Sanders for the flying wing sailplane Windfreak (oz) (RCM Plan#743). At that time this was a breakthrough in performance for this type of model which had suffered from mediocre performance. If at all possible, I suggest you read the article as it contained, in my opinion, very sound thinking. I found myself in such close agreement with Roger Sanders that I wanted to investigate the potential of this layout for electric power.

For readers who are unable to get hold of the original article, the two most important points were:

(1) Use a conventional and well proven airfoil as the starting point, and adapt it for stability (as a flying wing) by adding a surprisingly long and gentle reflex.
(2) For the purpose of calculating wing area wing loading, and CG position, consider only the basic airfoil (neglect the reflex portion).

Now for electric soaring there is a further most important variable - weight. When soaring with motor off, weight is of only minor importance, indeed too light a wing loading would be a disadvantage, but when climbing to soaring altitude, weight is critical. Our motor batteries store only limited energy, and most of this is used lifting the total weight up to altitude, so weight must be kept to a minimum. A final weight of 43 oz giving an effective wing loading of 6-28 oz/sq ft is the target to aim for. Because of this, I recommend the use of microservos and a 250 mAh battery pack for the receiver. Good flying requires minimal use of the controls, and I find that an hour's flying only uses about 30% to 40% of the rx battery's capacity. If in doubt, take a second pack out to the field.

El Condor is my second version of this design, I was so impressed with the first that I wanted to build a second and present it for others to experience. The changes I made for El Condor were small, the main ones being a slight reduction in span from 86 in to 80 in, and the adoption of polyhedral in place of curved dihedral. The latter looks very nice but is a real pain to build and cover, and the change has had no effect on performance or handling.

For sport flying I see no need for expensive equipment. El Condor uses, as have all my previous electric models, a relatively inexpensive motor much used by the car people, a Kyosho Spirit 600. I run these on six Sanyo cells of 1200 mAh capacity and, except for my geared Jabberwock, they turn the Graupner 7-1/4 x 3 folding prop at 11,300 static rpm and give between four and five minutes running time in the air, depending on how the motor is used during a flight.

While it is clear that larger props with gear reduction is more efficient, the light weight, simplicity, and streamlined nose that is obtained with the small prop has a great deal to commend it. Further, this small folder does fold when the motor is cut without provision for motor braking.

I use a motor control system utilizing two microswitches actuated by the motor servo, giving off half speed and full speed, I really only use the half speed position to give a soft start and stop for the motor; this arrangement has been described in these pages on several occasions. Simple on/off using a single microswitch would be satisfactory.

The handling qualities of El Condor are docile and should not present any problems to someone with a little experience at soaring. I would not recommend it as a first electric soarer if for no other reason than the shape is unusual and disorientation in the air could easily occur. I learned a lot from the prototype (still in excellent condition), and the first flight of El Condor was uneventful, Apart from a small change in elevator trim and the shifting of the CG slightly forward, nothing else was required on the first day out. The first flight was deliberately ended after eight minutes for these adjustments, and the following flight clocked up 18 minutes. Flights of over 20 minutes are common..." 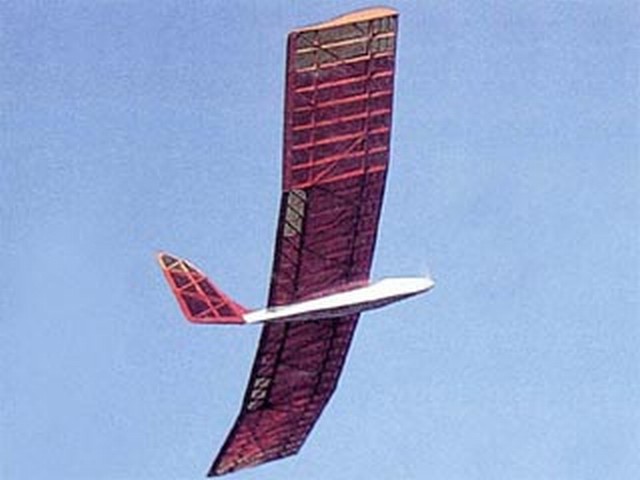