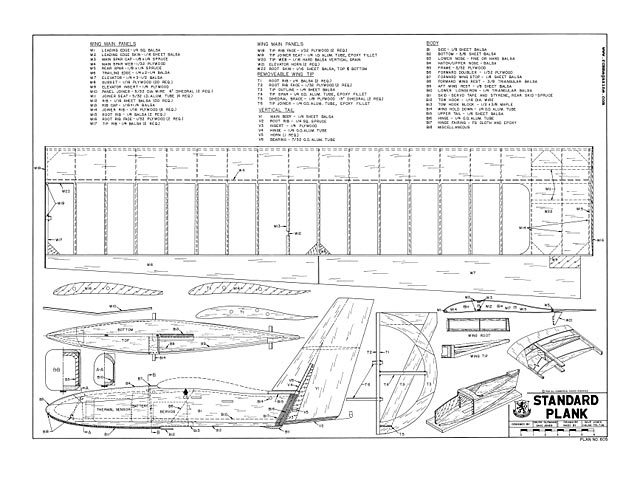 Quote: "The Standard Plank is the continuation of a design series on flying wings and is the second design from the series to be published. The Little Plank (oz5163) was featured in the May 1972 RCM and, judging from the correspondence received, was well accepted both here and abroad. The current design is an attempt to improve performance for thermal soaring while retaining the simplicity and ease of construction inherent with the Plank configuration. A new wing section was developed based on the NACA 6409 and the aspect ratio was increased to ten. Control installation was simplified through the use of elevator and rudder. Design Summary: Configuration: Flying wing with no sweep and a constant wing section allowing the use of a single rib size. Fuselage: Minimum cross section with a single internal bulkhead. Rudder: Flying rudder utilizing an aluminum tube hinge. Power: .049 to .051 in a power pod, easily removed for slope or tow launch. Prototype used a Cox TD .051. Controls: Elevator and rudder. Wing Section: CJ-2, a section developed by the authors for use on flying wings and based on the NACA 6409 used on the Olympic 99 and other R/C gliders. Wing: Two piece with integral or plug in tips. Basic span of 100 inches may be extended with alternate tips." 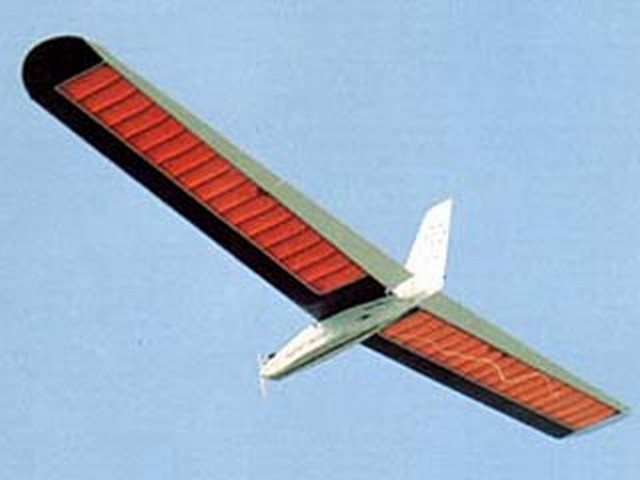