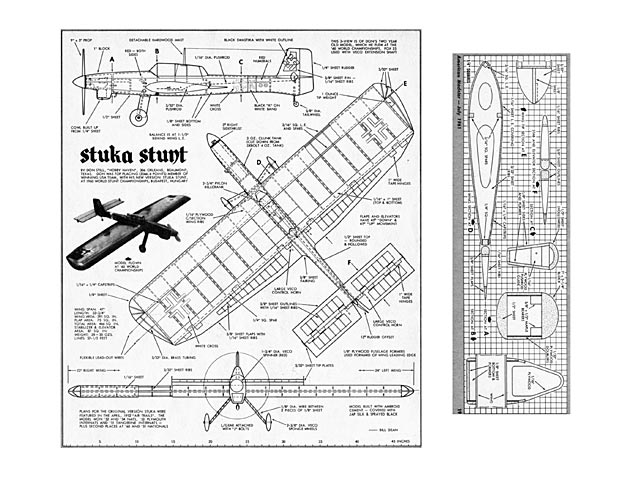 Don Still was the proprietor of the Happy Hobby Haven at Beaumont in Texas. His calm approach at the World Control Line Championships at Budapest in September 1960, together with the best flight of the contest that raised 1062 points, earned him many European admirers. Don placed second in the overall points at that World Champs more than fourty years ago.

Don was a long-time stunt flyer, was once the U.S. National Champion and although not always in the top three in the States, his flying kept everyone on their toes. After the 1960 contest in Hungary, he and fellow US team member Bob Palmer put on a fantastic duet of formation flying and in solo performance, Don surprised everyone by pulling out of wingovers with his wheels on the ground, keeping them there for half the circuit and then repeating the performance over and over.

For the competition, Don had two examples of the Stuka, using his two year old black model with German military insignia, obliterated by colour transfer triangles. Don commented that it was 'loose as a goose', while the white model, illustrated here, with different cowl and rudder was brand new and stiff.

Don favoured the Fox 25 motor which gave him the right amount of power for a 30oz. model (equal to the earlier 29s} and this, coupled with the fact that he used a 464 sq. in. wing, gave the light loading both on the wing and on the engine for best aerobatic performance. His theory was, "the lighter we can make it, the better job it can do".

The Stuka was flown on 57.5 ft lines and used a 9 x 5 or 9 x 6 prop, the motor just off peak revolutions to give that reserve of power needed in the square figures. By most standards, its flight pattern was medium-to-fast and generous. With offset on the rudder and the engine, plus an asymmetrical wing, the Stuka kept the lines nice and tight, especially in overhead flight. (In fact the design originated in 1950 and was changed only in details and length of nose).

The model was by no means intended to be a scale model of the Junkers Ju87 dive bomber, but was merely based on that type in the side profile to be different. Don equipped the cockpit with dummy instruments etc. and the external finish was excellent.

Covering was silk and the final finish, in the case of the model illustrated, was part brush and part spray effect, polished_ after fuel proofing. A clever feature of the model was the way in which the springy undercarriage and the balsa legs attached to it was free to pivot inside leather fillets glued to the fuselage. This enabled Don to put it on the ground and hold it there with the powerful elevator and flap combination, each of which travelled through 45 degrees either side of neutral.

The design was subsequently kitted by the American Ambroid Company, but is no longer available."

Note this is not a full-size plan, this is a scan of the magazine page as printed in 1961. 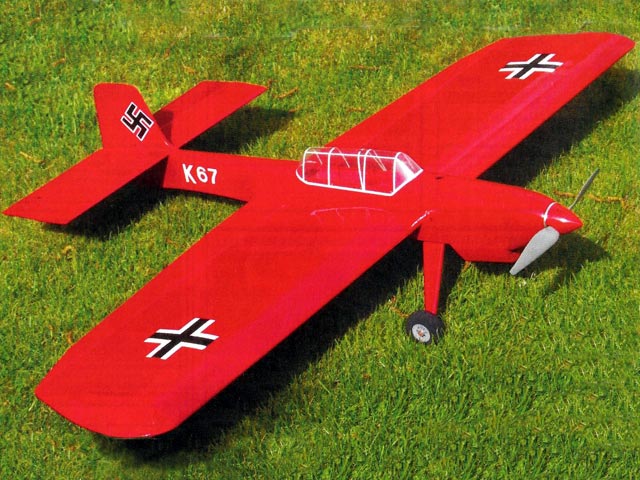