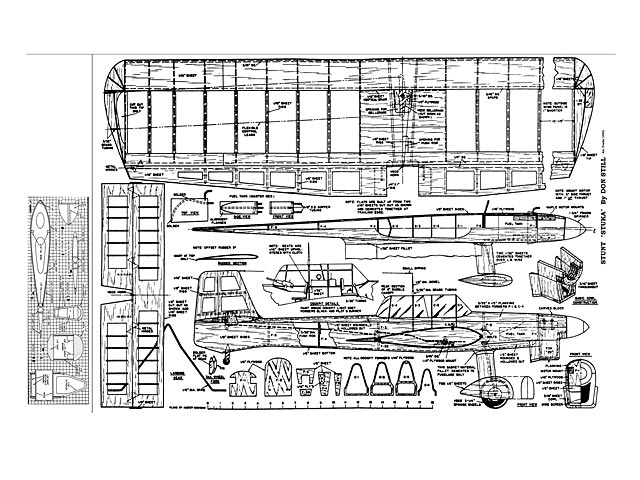 Quote: "Take a good look of this semi-scale beauty, for its the stunt ship which attracted most attention at the last National competition at Dallas. Isn't she a dream?

It's spring and time for college final, exams. A graduating senior goes to his desk, takes pencil and paper in hand, and hurriedly begins - to sketch plans for the approaching model contest season. This was how the Stuka stunt ship came into being.

After having accumulated the highest score in precision acrobatics at the '49 Nationals in Olathe, Kansas, then the following year at the Dallas Nationals being replaced for the first position by the last flight of the day, this stunter had some observations to make. Stunting had been making changes and it wasn't in the maneuvers - appearance was becoming the thing.

The ship used at the '49 Nationals was a large-area, short-coupled Atwood .60 job. With only a few minor changes, the same ship was used at the '50 Nationals. But this model lacked the now-essential property - realistic proportions.

Seeing the need for this different type of stunt ship, I decided on a semi-scale warplane. Searching for a plane with good dimensions, sleek Lines, easy cowling, and with semi-box fuselage, I chanced on the German Junkers Ju87B Stuka which filled the bill.

Some noticeable changes were made, namely the inverted gull wing became a straight wing with a wider chord. Otherwise the cowl, landing gear, tail surfaces, and fuselage remained approximate scale. This ship was awarded the highest appearance points at the '51 Nats and took second place in the Senior dividion.

The Stuka was designed for medium-sized maneuvers and cannot be made to do tight, un-uniform flip-flops (a fault with most flap ships). Weight should be kept around two pounds, my ship weighing 30 ounces.

Because this ship is designed for the more experienced model builder, conventional construction advice will be omitted. Attention will be placed on unusual details. Construction was begun on the wing. It is of the popular 'D' tube type. However, it was found construction time is cut considerably, with no strength sacrifice, by using two 3/16 in square main spars instead of the 1/16 in sheet spar. Wing alignment is also easier..." 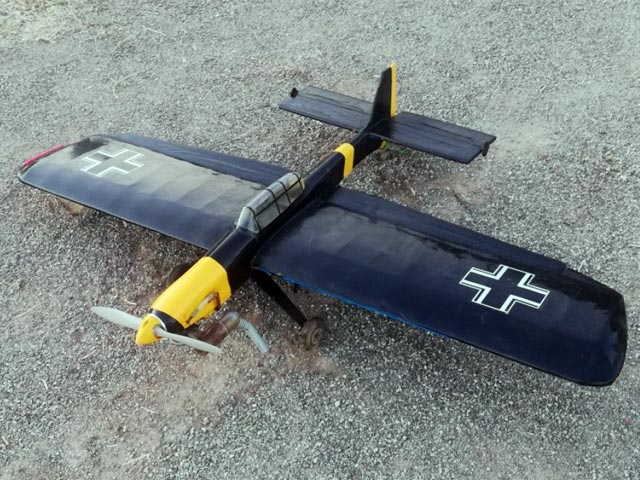 Allow me please to send some pictures of my Stukas [main pic, 004-007]. One of my favorite stunt planes along with the TBird, the Aldridge & Gieseke Noblers and the Tucker Special. I have already built some 14 Stukas, each one with some modifications and always using as power a Brodak 40, 11x4. An elegant model and excellent flyer for his category. Here are some pictures, older and new.
Antonis Zervas - 27/10/2021
Add a comment