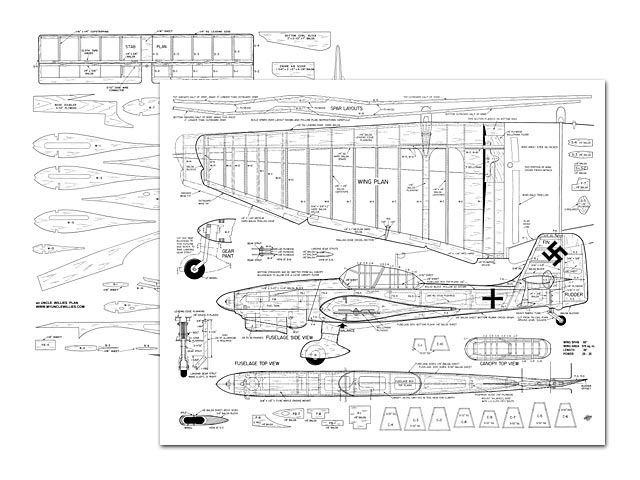 Quote: "One of the most spectacular scale-stunt aircraft ever designed, this unique ship a fine project for that .29 or .35. Stuka, by Hi Johnson.

Our first approach to stunt was the barn-door type which, if well balanced aerodynamically and statically, turned in some beautiful flights. As we made progress, the stunt pattern was evolved, and each judge and pilot had his interpretation of a good maneuver. Finally the AMA gave us pictures and descriptions which settled all arguments. Stunt pilots knuckled down to some real precision flying. This put pressure on the airplane and its powerplant.

Many approaches to scale in stunt ships have been tried. The Stuka has been a favorite of mine, especially since the wing planform places the bulk of the area close to the fuselage, where the moment arm (area moment) is short. This makes it ideal for calm or windy weather, and for slow or fast flying.

Since the Stuka is a high-performance ship, careful alignment during construction is a must, and warps must be kept out of the wing. If your airplane, for instance, tends to do tighter insides than outsides, a little downthrust corrects it.

Your ship should be balanced where shown, or forward. I leave wing-tip weight up to the builder because I feel anyone building this ship is a polished flier and has his own opinions. Five Stukas built ranged from 38 to 45 ozs. It is important to keep the aft sections as light as possible. (Better nose-heavy than tail-heavy.) Two required 1 oz of solder in the backplate.

The Stuka lends itself to variation. I would not advise shortening the tail moment, nor would I decrease the size of the stab and elevator without lengthening the tail moment. A lot of the fliers frowned on the stiff main gear, but after flying it were inclined to like it. The Stuka lands as well into the wind as it does downwind - an indication of exceptional penetration qualities.

Construction. After filling notches, and working in cramped quarters when installing controls, tail wheel details with problems of alignment, I tried the box method for ease in general construction and alignment. Build the box, wing, and stabilizer assemblies complete up to the covering. Install the controls in the wing complete...." 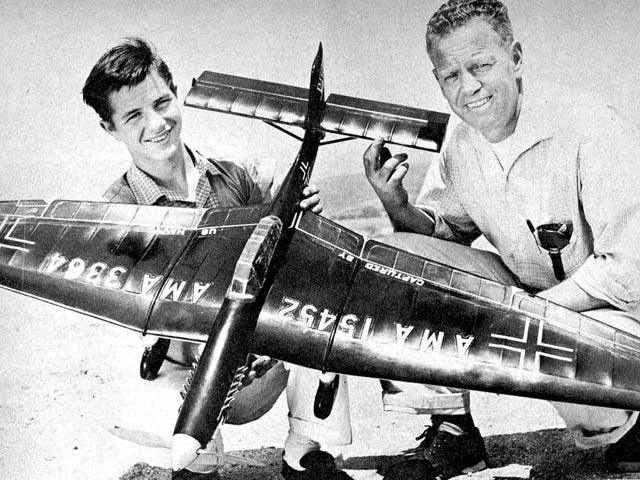