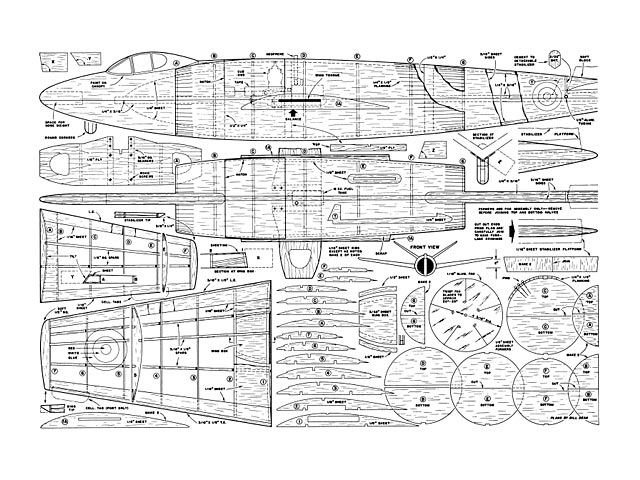 Quote: "Wingspan 28in. Engine .09. Freefight. By BILL DEAN. Powered by Cub .09, this big ducted fan version of a famous jet fighter flew out of sight on its first flight after two minutes 15 seconds. After reading through Tom Purcell's account of his ducted fan experiments (October '51 MAN) it was only a question of time before we too succumbed to the lure of a glo-motor powered jet scale. Finally, we settled for a replica of the unconventional Vickers Supermarine 508 - a big twin-Avon powered shipboard fighter. Features of this aircraft which particularly attracted us were simple unswept wings, buttefly tail and, best of all, large intakes and outlets on each side of fuselage. We built a Jetex 50 version to test out basic layout and, since this performed well, went straight on to draw up plans to suit the Cub .099. We abandoned the idea of an exact scale (oval-section) fuselage, as duct construction complications seemed undesirable for a magazine feature. So instead, we made the main fuselage circular and profiled nose and tail. By using PE Norman's half-shell method of planked monocoque construction, we were able to install a much 'larger fan than would have otherwise been possible. The final result is a fast flying model that differs little in appearance from the full size machine once it becomes airborne. Our own model flew out of sight on its first flight of 2 min 15 sec and performance far exceeds our early expectations. We found that the .099 Cub supplies ample power for this 15-1/2 ounce model, but there is plenty of room for the larger .14 Cub, with which really spectacular results should be obtained." 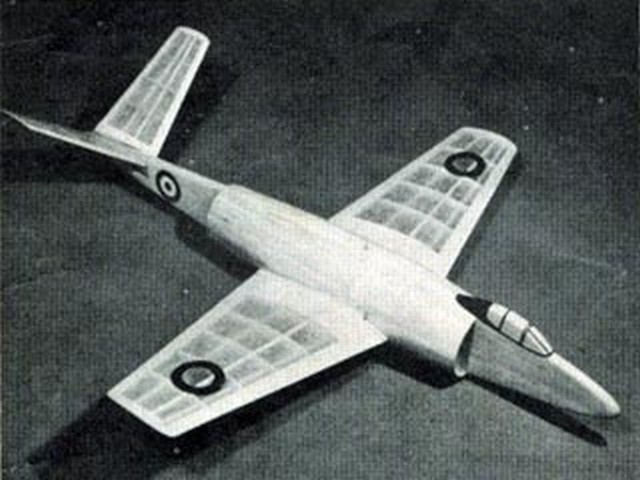