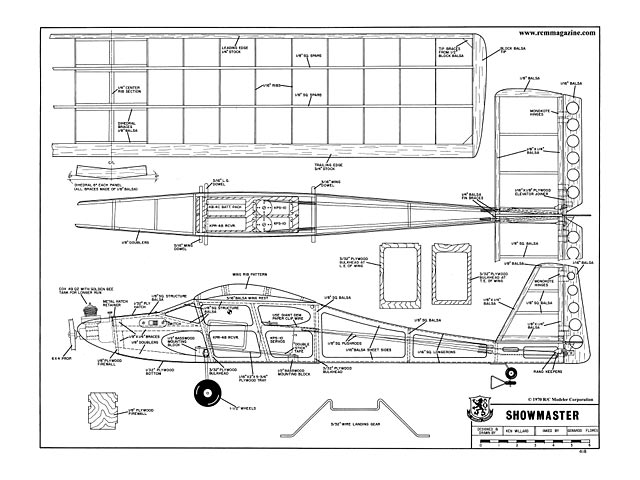 Quote: "The Showmaster is a conversation piece. No matter where you fly it - at the field, with all of the big screamers, or at home in the street - the spectators are fascinated both with the performance and the construction. With the muffler of the QZ engine turned full on, the engine can just be heard when running by itself, and if the airplane is in the air with another plane, you'd swear it was running on rubber bands!

It also intrigues beginners, because it 'flies by itself'. From a hand launch, it will free flight up to altitude, and there I can turn it over to any beginner, let him try anything he wants to, and tell him that if he gets confused or disoriented, just let it alone, and the Showmaster will recover from any attitude - inverted, vertical, or what have you and resume a normal flight attitude. Then, when the engine quits, in order to land it, just head it in the direction you want it to land, and let it alone.

All of this assumes, of course, that you are not trying these things in a strong wind. It was not designed to fly under these conditions,even though it will take a wind of ten to twelve miles an hour after you learn to fly it and keep the nose trimmed down.

Now, even though any beginner can fly it, it isn't exactly what I would call a beginner's airplane, unless he is a good builder. The structure is strong enough to withstand any air load that you can put on it, but it's pretty fragile when compared to the usual R/C job. And in building it, you have to be careful that you don't get any warps in the wing, stab, or fin.

My Showmaster is now well over a year old, and has so many flights on it that l couldn't begin to count them. Originally, I had a Bonner 4RS in it, then I put in a Kraft with the KPS-10 servos and the 225 battery pack. Next, I tested a Micro Avionics XL-IC, with the tiny servos and their small battery pack - you may recall my reporting that after about an hour and a half of total flying time, without recharging the batteries, I decided the drain of the Micro Avionics receiver and the two servos would never cause a battery problem in normal usage. As a result, I now have the Micro Avionics installed in a light-weight slope soarer, and I'm flying the Showmaster with the Kraft, but with two changes. I found that the model would easily carry the added weight of the 500MA battery. (In fact, I believe it will carry the KFS-9 servos also, if that's the size you have, but that might make it a little bit sluggish. Certainly it will if you use the 225 pack, because the weight differences offset each other.)

The other change is in the transmitter - I'm using the new single stick version - locally the fliers call them the 'Cyclops', because it looks like a big eye with that single gimbal and the polished knob sticking out, but I'll tell you this; as far as I'm concerned, it's the only way to fly! But then, I've always flown the mode with the engine and rudder control on the left stick, and aileron and elevator on the right. The big advantage, as I see it, of the big knob, is that it prevents 'thumbing' and gives you a better feeling for small control movements.

However, if you use this mode, but don't have ailerons, as in the case of the Showmaster, then connect the rudder to the aileron outlet. You'll THINK it has ailerons, the way it responds.

Well, enough about the gear. Let's talk a little about the construction. The plans will tell you all that you need to know regarding the details, so all I need to add is that all the cutouts In the sides, and the lightening holes in the rudder and elevators are really for effect. The weight of the balsa that's removed is about half an ounce at most - but it is the transparent MonoKote over the open framework that really attracts the attention. You can see the gear operate even though the airplane is completely assembled. It shows everything - so you had better do a good job of building, because it shows the mistakes just as much as the good work! That's where it gets the name, Showmaster - it shows everything.

There is only one phase of the construction that needs explaining, and that is how to get the Super MonoKote to stick to the underside of the wing, which is highly undercambered. The undercamber, of course, is to keep the speed of the model down so that it can be flown in confined areas.

Each sheet of MonoKote has a set of instructions included, to follow them precisely for best results. And to attach the material to the underside of the wing, you begin by cutting a piece slightly larger - about a half inch all around - and laying it gently in place on the wing, which you have upside down for ease of covering.

First, run your iron, or Sealector, if you have one, (and if you're going to do a lot of covering with these heat activated materials, I recommend that you get a Sealector) along the forward bottom spar, sealing the MonoKote to it. Try to keep the MonoKote lying straight as you seal it to the spar. Next, seal the MonoKote to the rear spar, then the leading edge, then the trailing edge. Finally, seal it individually to each rib bottom.

You now have the bottom of the wing sealed, with the MonoKote attached to the ribs, spars, leading and trailing edge. Now you can safely shrink the MonoKote in each square bounded by the spars and the ribs, and thebottom is completed.

One other detail that might be a little hard to figure out is the metal retaining plate for the hatch. It’s just a piece of thin aluminum sheet, about 1/2 in by 1-1/4 in, which is bent so that 3/8 by 1-1/4 is pressed against the firewall by the mounting plate of the engine (drill holes to lit the engine mounting bolts) and 1/8 by 1-1/4 overhangs the top of the fuselage. Mount it to the firewall so the overhang clears the top of the fuselage by 1/32 and the 1/32 plywood hatch then slides underneath it.

I don't think you'll have any trouble flying it. The built in down-thrust and right thrust, shown on the plans, should be just about right for nearly all versions, but if not, it's close enough so that minor adjustments can be made using the trim controls. You'll find it very responsive, and before you try flying in a confined area, practice in an open area until you know exactly what will happen when you give the model full control. Once you've learned that, then any vacant lot, or open street, is large enough for flying, since it will turn with about a ten foot radius.

The Showmaster may not win any contests for you - unless you enter a loop contest. It will do about 60 loops in three minutes. But if you build it carefully, it will win a lot of compliments for you - and those are always good for a Sunday Flier's morale." 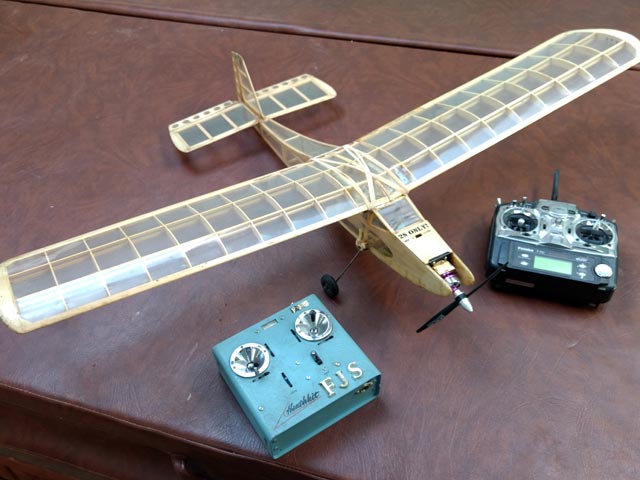 Hello again from Oklahoma. Please find photos of my Showmaster, built by my late father F.J. Solinski in 1970 [main pic and 010-012]. Dad was a draftsman and drew his own building plans from the small sample plans found in RCM. We flew it with an 0.049 with an extended tank for a couple of years, then it sat hanging in dad's basement for the last 50 years. When he died in 2017 I brought it to my home for nostalgia. Converted it to electric in 2017, still flies quite well.
Tom Solinski - 18/05/2020
Add a comment