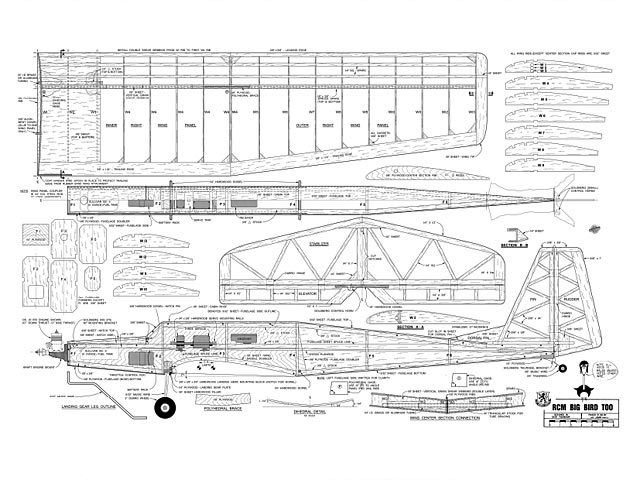 Big Bird Too. Radio control sport model. This is a low-wing version of the earlier RCM-810 Big Bird (oz5827) design.

Quote: "The RCM Big Bird (oz5827) was presented in our September 1980 issue and has been one of our all time most popular designs. Dozens of our friends have put an uncounted number of enjoyable flights on the prototype Big Bird and it is still as good as new. Some of us, however. become bored with almost anything after awhile, therefore. the Big Bird Too was conceived.

One day, while out for a flying session, the Big Bird wing was laying on the ground and for no particular reason the fuselage was placed across the top of the wing. This immediately brought a rash of smart aleck comments from good ole buddies about making a low wing fighter out of the docile Big Bird. Later, back at our office, lines were drawn on the BB plans to alter the fuselage to provide a cut-out on the bottom for the wing. A new fuselage and tail were built (too lazy to build another wing) and we were off to see how it would fly. Fantastic - we could hardly believe it, but it performs better than the orignial BB.

The Big Bird Too is even more stable than the BB. The center of lift is naturally lower than on the BB but, due to the polyhedral, it is still above the CG and we do not experience the pendulum effect as much as with the BB.

In the same concept as the BB, the RCM Big Bird Too is a powered aircraft that could be recommended as the first radio controlled airplane project, particularly for a person who either does not have, or does not want an experienced RC'er to assist him. We are thoroughly aware of modelers who will assemble their first aircraft and go out alone to make their very first R/C flight. The probability of success on this first unaided attempt is very low with the majority of the trainer type aircraft.

Dozens of trainers are available with varying degrees of complexity of construction. The Big Bird Too is simple to assemble even though there are a goodly number of detail parts. It was designed in this manner in order to keep it light, yet strong. as weight is .a key factor in the Big Bird concept.

Our approach is to combine low weight with generous wing area and a small throttle equipped engine to obtain a forgiving, slow flying aircraft. This allows the new pilot ample time to correct his mistakes before the craft smashes into the ground. In fact, with the craft at a reasonable altitude, if the pilot has managed to get the airplane into an awkward situation, he merely has to throttle back the engine, return controls to neutral, and the ship will right itself.

There are those people who will immediately say that the RCM Big Bird Too is a powered sailplane with a landing gear. Well, it is, in a way. The wing is a shortened version of the Bridi Big Birdy sailplane wing. The fuselage, however, is pure airplane, designed to be easy to build and rugged enough to withstand lots of abuse. The sturdy landing gear is usually found on aircraft weighing twice as much as the Big Bird Too.

The rank beginners aren't the only ones who can enjoy the Big Bird Too - several of our experienced flying friends have had a ball with it. Unbelievably small consecutive loops, tight turns, and wallowing barrel rolls, all in slow motion, have brought on lots of giggles.

Another aspect of the RCM Big Bird Too is the low cost of both building and flying. We have been using an 0.S. .10 engine with excellent results. It is an economical engine that seems to run forever on 4 ounces of low nitro fuel. There is also the Enya, Fuji, Hobby Shack Speedie, Thunder Tiger, and other suitable engines in this .10 cu in size, all are good just take your choice, you will get more go per gallon.

Incidentally, both of these Big Birds have been flown on .15 engines. The main benefit derived is an increase in the rate of climb. We used a Fox .15 Ball Bearing Schneurle engine, a dandy little powerhouse that somehow hasn't received the recognition it deserves. It is an easy stalling, reliable little engine and is economical in the fuel consumption department. The construction details shown in our photos graphically describe the assembly of the RCM Big Bird Too. However, to assist the inexperienced beginners. we are presenting a much more comprehensive set of building instruction, than usual.

Our recommended construction sequence begins with the tail feathers. The wing panels are constructed and joined at the polyhedral joint, then the fuselage is built. The aircraft is covered and, finally, with your R/C equipment installed, you are ready to fly. Please read through the instructions before you begin work on each section so you'll know what's coming before you get there. With these few minutes of preparation you can better adapt our notes to your own ways of working..."

Quote: "Steve, Here is RCM's Big Bird II. It is the low wing version of the Big Bird high wing you have on Outerzone now. I built this plane about 20 some years ago, and it was a superb flyer. It would stay up all day with an OS 10 and 4 oz of fuel. Really good for thermals but not for high wind. I have it on my list to build again with electric motor. The title box of my original plan was town off and the large scanner chopped W1 W2 W3. A little measuring of the ribs on the wing plan with give the length. Thanks for the great service."

Note: this plan shows some distortion in the scannning at top right. If anyone out there has the skills and time available to clean this plan up and straighten it out, that would be great, thanks.

Update 20/04/2017: For an alternate clearer copy of this plan (no scanning distortion, more reliable) see the original Big Bird (oz5827) page which includes supplementary plan by hogal, which shows both versions of the Big Bird combined, in PDFvector format.

Update 03/05/2017: Replaced this plan with a clearer copy (removed distortion, redrawn from scratch) thanks to TonyP.

Quote: "Some months ago I downloaded Big Bird Too ID 6220. I didn't bother to book it as it was very badly distorted and needed a complete redraw, was going to take a long time, and I was'nt certain how original I could make it look. In fact it's come out fine. However, I see that Hogal has done one of his fine jobs on it and beaten me to it. My fault of course but I have attached it anyway. " 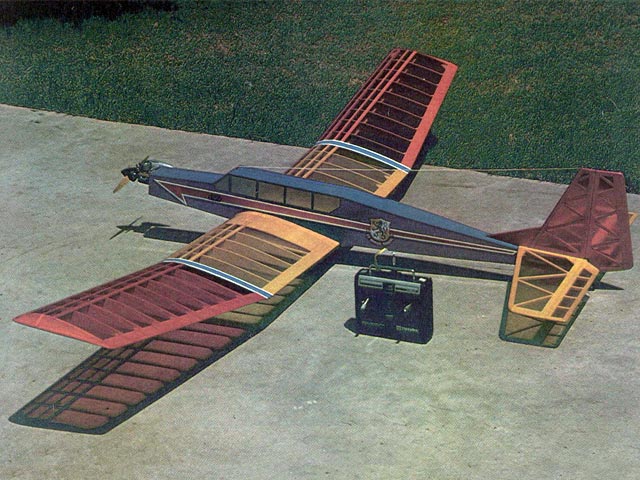 I've been eagerly waiting for somebody to post the Big Bird II. Regarding the distortion in the scan and the missing rib tips, I read the construction article on another website, which said that the wing was exactly the same as the original Big Bird because they were too lazy to build another one. If a good scan of the Big Bird II can't be had, a really ambitious person could simply cut and paste from the other plan to replace every distorted part. I'll see if I can talk my son into doing that. He's not a model airplane nut, but he loves working with photoshop.
rob - 05/01/2015
Here are a couple pictures of my Big Bird Too [more pics 007,008]. I modified the plans to use "bolt on" wings versus the rubber bands, extended the overall wingspan to 100" by increasing the length of the inner wing panels, increased the rudder and elevators by 30%, and added ailerons and flaps. She is powered by an OS .25 FX 2 cycle engine. This thing just loves to fly and is the easiest flying plane I own. With flaps in full down position she almost stands still in the air.
Larry Nieman - 02/03/2020
Add a comment