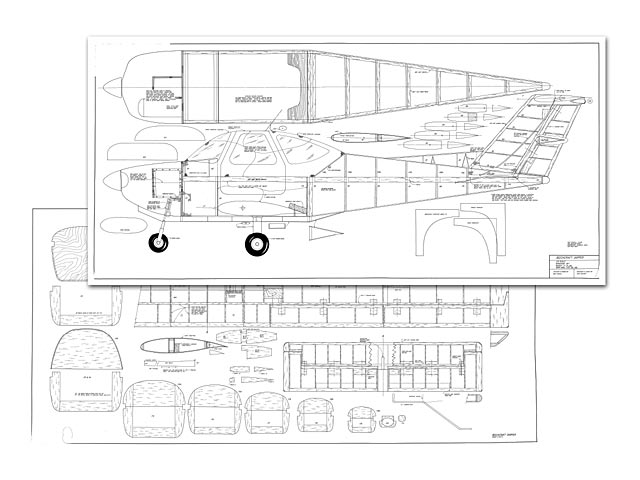 Quote: "Hi Steve, I just love anything with a T tail. I just got this plan from the 1980’s scanned and I doubt there are very many copies in existence. Wingspan is 90in."

Quote: "Skipper, by Bud Caddell. It looks like a Piper Tomahawk, doesn't it? Or, is it that the Tomahawk looks like a Skipper, I've heard they were designed by the same man. I've also heard that they're entirely different! The actual fact is that they are designed to train embryo pilots to fly, and they both do a superb job - a far cry from the J3 in which I first soloed in. The Skipper is considered the bottom of the Beech line - in price only, though. With normal optional equipment, you'll spend about $32,000 for a factory fresh model.

My interest in the Skipper started with the demise of a Nosen Citabria, which met its death from a too rich diet of G-forces created by a newly installed Webra 91. The Citabria was my camera plane - a cheap 8mm movie camera was installed and I got many exciting rolls of film from the air. However, the Citabria was not the best camera mount, it was just too stable, and turns could only be done with coordinated rudder and aileron. Quite often the pictures showed only blue sky from poor control coordination.

I came across a picture of a cute little Beech Trainer - I knew from past experience the fine folks at Wichita have 1/20th scale drawings available for a nominal price. I wrote, got a copy and went to work. I guess you can call this go project 'apartment-size-1/4-scale.'

The Skipper employs the GAW-1 wing section, and it sure is strange looking - sort of like an airfoil section drawn up by a committee. I was hesitant to use it. The theory behind the section is way over my head in technical jargon but, boiled down, it means getting the same amount of lift from a wing that's 25 percent smaller. But, hey! That's on the full-size airframe ... we use different Reynolds numbers on our models. Finally, I said what the heck, nothing ventured nothing gained. If it doesn't fly, I'll give it to my ole buddy Doss Steed - he can make anything fly.

But fly it did! Right off the board, I was almost a spectator through the whole flight. My official photographer and good friend Gary Tatasciore was ordering me around on the first flight like a director. Usually, I'm nervous Nellie on the first flight of a new scale bird, but not this one, it was like I had flown it 200 times before. It flies just great and with this airfoil section, and you can practically park it in the air.

The prototype was built almost entirely of Sig contest balsa - this resulted in a flying weight of a tad over 16 pounds. I kept it light because of the unknown value of the GAW-1. I now feel that a couple of pounds of ballast will make a great plane even better. But please, only light balsa in the tail section. This bird has a long tail moment, and you just might end up with an overweight bird that's tail heavy - perish the thought!

Usually, at this point, I'd go right into construction procedures. But first let me tell you a few things that a designer goes through before he can get to the point of gluing Part A to Part B.

There are at least 250 more airplanes I want to build than I have time left. So believe me, in my middle fifties, I give a lot of thought to a project before I decide. I've been building models for at least 50 of my 55 years (16 years in R/C, and 13 years in Scale), and in that time I've made about every mistake possible, and have seen a lot made by a host of others. I hope I have profited by this in the three important phases of the scratchbuilder - Designing, Building, and Flying. The research that goes into such a project is probably at least equal to the building time. I like Beechcraft airplanes, and this is my third. Why? It's simple, Beech makes some 20 different airframes, and I could stay happy if I never looked beyond their brochure for a model to build.

But, more importantly is that from where I write, it's a 15-minute drive to the local airport. I can photograph to my heart's content. They know me out there and allow me to crawl over the airplanes with a tape measure. But why a tape measure, when I said Beech has 1/20th scale drawings. Well folks, at the risk of slightly offending some good friends in Wichita, I have to say that even the manufacturer makes mistakes on drawings. Quite often, the task is assigned to a draftsman whose job it is to turn out a 4-view drawing of a general nature. This is fine in most cases, but not for nuts like me.

The question most asked me is, how scale is it? My answer is, as scale as I can make it. I've found that my designs fly just fine when I don't monkey around with some things I don't know nearly enough about! The wing area is left as is, as are the fuselage width, the moments, and the tail area. I just don't take any poetic license at all in these areas. The first thing that usually gets changed by a designer is the fuselage width. They narrow it! Why, I don't know..." 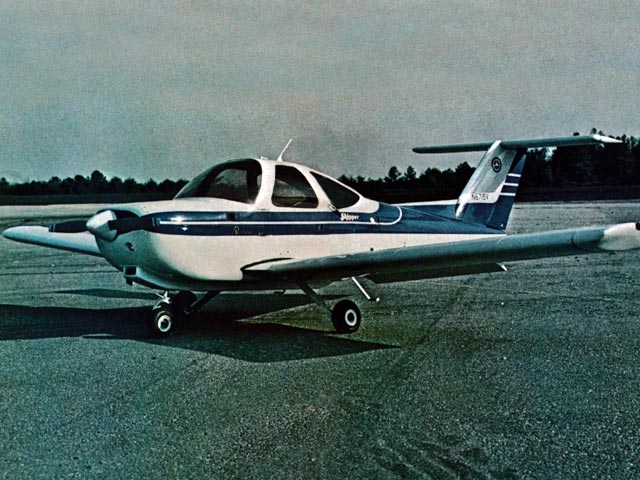