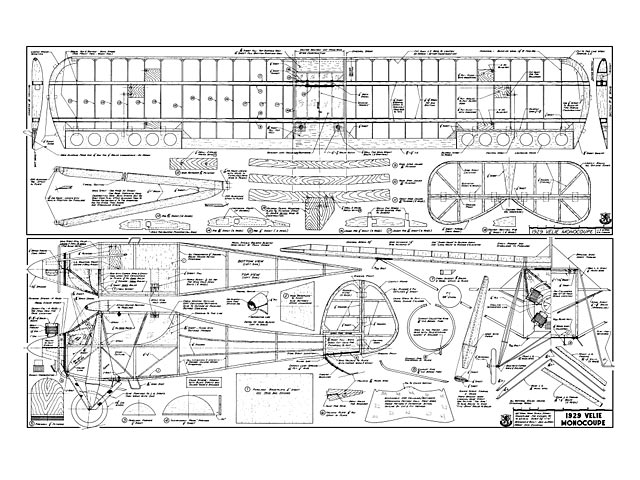 Quote: "The Velie Monocoupe is a slice of aeronautical nostalgia. Designed by Clayton Folkerts, of later racing aircraft fame, the Velie was the second in a long line of Monocoupes - a definitive design. Powered by the 65 horsepower Velie air-cooled radial engine, the 1928/1929 version of this famous monoplane took home more than its share of trophies in the stock plane races that were popular in the late 20's and early 30's: With a span of 32 feet and an overall length of 19 feet 9 inches, the Velie Monocoupe cruised at 85 mph. It seated two, in chummy side-by-side comfort. An excellent training aircraft, its stability also attracted the sportsman (and sportswoman) pilot of the era.

Factory drawings were used in scaling the model - twice. Basically it is a 3x enlargement of Herb Clukey's outstanding rubber-powered model Velie Monocoupe (oz405) from Flyline Models. Herb used the factory drawings in producing his 3/4in scale Monocoupe. He loaned me the same drawings to me, to assist in the deisgn of the RC version. As far as can be determined there is no deviation in scale from either effort. Outlines and wing sections are as 'Monocoupe' as one can get. The RC version includes more ribs than the prototype and the wing and landing gear struts attach differently - but these changes were dictated by the materials used in model construction. The model falls into the standoff scale category, due to these small changes as well as a lack of cockpit detail and the exposure of the engine cylinder as part of the 5-cylinder 'scale' Velie engine. This latter, because I'm a firm believer in keeping R/C engines cool - particularly when they are as overworked as they are in the usual scale model.

For the 'super-scalebuilder,' and the scale contestant, presentation data may be found in two books. The first, Joseph Juptner's 'US Civil Aircraft', Volume 2, has two excellent photographs, clearly showing markings on the prototype aircraft. The second book, 'Of Monocoupes and Men,' by John W Underwood, includes a picture of the primitive instrument panel as well as an in-flight shot.

The Velie Monocoupe is relatively simple to build and prepare for flight. The usual admonition, 'not for beginners' doesnt really apply, although initial test flights should be made by a thoroughly competent pilot. The construction is about as basic as a Megow 10 cent model of yesteryear..." 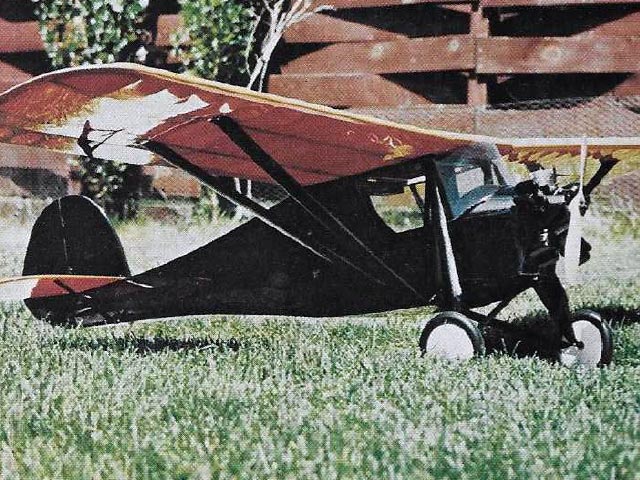