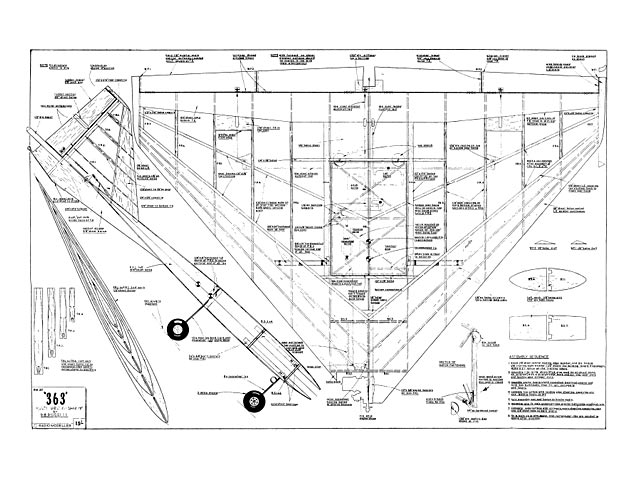 WITH so many exciting, elegant and efficient full-size aeroplanes using the delta configuration, it is surprising that so few modellers have tried this layout, and that even fewer have had any success - the first critical flight often being the last. Yet it can be done. Deltas have often won 2-1/2 cc and open pylon races, and, during FAI record attemps, one went to over 12,000 feet.

I have built three deltas, over the Last five years, all three are still flying, and the latest, presented here, has even mixed it with the Hammants, Van den Berghs and Sprengs, without disgracing itself. This is not to claim that it is the ideal acrobatic contest aeroplane, but it will do all the manoeuvres, does 75 mph with a fully silenced O.S. 40, has a rate of climb comparable to the Spfifire II, and attracts attention wherever it is flown. So, if you think all current multis look alike, and would like to try a three-cornered flying machine, if only to be different, 363 is the model for you.

363 is an attempt to produce an out-of-the-rut, fly-for-fun aeroplane with all mod cons, that can also be used for the occasional open pylon race or acrobatic competition. Construction is orthodox, about the only unusual feature being the finite thickness trailing edges (you know; cut off square). In the case of the rudder, this is to counter an occasional 'snaking', a sort of twitching in the yaw plane, to which deltas seem to be prone. It still shows up a bit in very slow tight turns, but is a useful reminder that you are on the ragged edge.

363 is not for the beginner, so installations of engine, control runs, radio equipment, etc, are left sketchy - most people have their on ideas on these subjects, anyway. The double 90 deg. bell-crank rudder linkage is based on the 'never use one bit when thirteen will do' philosophy. It could be avoided with a bit of shuffling around, no doubt. The original 363 is covered with heavyweight modelspan, which has proved entirely adequate (on the first 250 flights, anyway) and weighs an ounce or two under five pounds, even with the electric brakes and the attendant extra 3 x 225 DEAC. A 9x6 prop seems to suit the O.S. 40, giving some 14,000 rpm static.

Trimming and flying Nothing is specially critical but, for the first flight, you might find it less exciting if you locate the CG as shown on the plan. I was a hit apprehensive before the first flight (who isn't?) of the 363, and put 4 ounces of lead in the tank compartment, but this proved an unnecessary bit of insurance, as the flight was uneventful..." 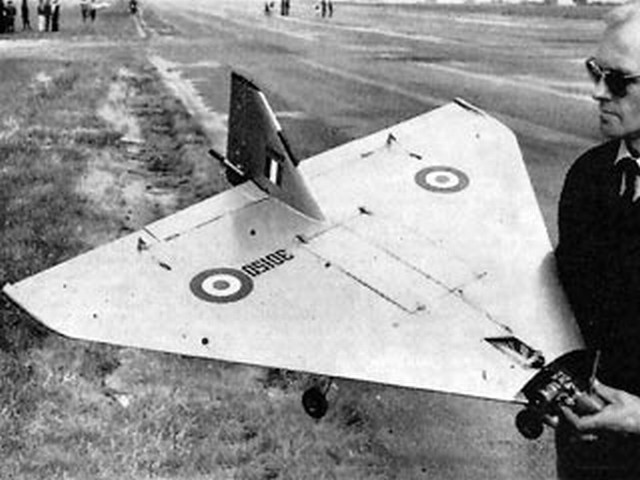 Wondering if anyone has tried this plan outfitting the wing with solar panels to charge the batteries in-flight. This wing just screams solar.
Jrat65 - 03/07/2019
Gosh if you are lucky, adding solar panels might give you at least an extra 10 seconds of flight ??
Keith England - 23/11/2020
Add a comment