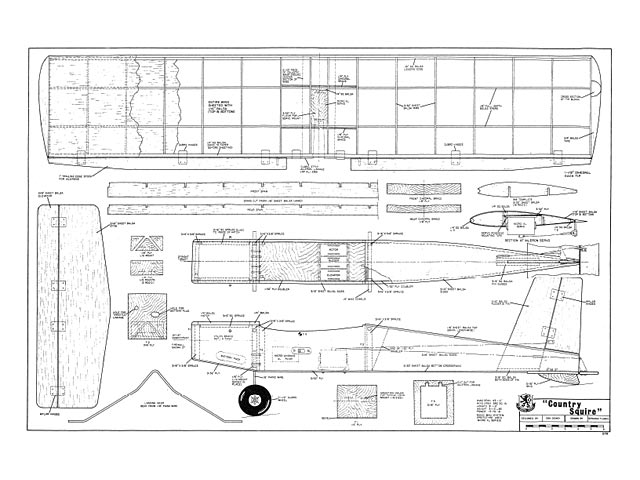 Quote: "The design of this model came about in answer to a challenge from Phil Heller and the Cordova Model Masters who recently created an RC combat event. Designed for 400 sq inch aircraft with a maximum engine displacement of .19, the event consists of one aircraft, designated as a target plane, towing a 20 foot crepe paper streamer about a pylon course. At a given signal, the aggressor aircraft has 2 minutes to make as many passes as possible in an attempt to cut the streamer. Scoring is accomplished by giving one point for each pass and 15 points for a cut. After the combat event is completed, a Rat Race is held around the same pylon course. This is a 100 lap event (or any other designated amount) with a mandatory refueling stop. As each aircraft lands, it must be returned to the starting line for refueling and restart. Obviously, then, an aircraft designed for these two fun events must be expendable, dictating a rugged and quickly built model that can withstand the rigors of this type of flying. With this design criteria in mind, and since RCM is a fulcrum for the dissemination of the outpourings of genius (?) for our various writers, I proceeded to read the latest offerings from the firm of Herman and Capehart, which happens to appear in this issue. This months ravings consists of a discussion on the controversy over the low drag fast aircraft versus the high drag slow aircraft. Since, in some circles; the middle of the road approach is considered to be the safest and most expedient, I was convinced that I needed a half-fast model - which, I have been told on numerous occasions, when said rapidly, describes my abilities as a designer, builder, and pilot.

Obviously, the box shape fuselage is the quickest and easiest to build, and, since this new design would obviously carry the Basic Box to an all new dawn of glory, it had to have a name befitting its forthcoming splendor. With our staff aerodynamicists and design experts spending months of time and expensive typesetting on the intricacies of fine design points, I would like to spend a moment or two on the most difficult part of aerodynamics - selecting the proper name for your new design. This facet of aircraft design is not to be scoffed at, since there are many hidden ramifications that are not immediately apparent. If you are married, and come up with a girls name for your new design, you may find yourself in a somewhat untenable position at home. If, on the other hand, you end up with a name that leans towards the masculine gender, you may find position when you yourself in an even more indefensible show up at the local flying field!

Thus, I decided to name this plane after my 1968 station wagon (leased). And if you think that closes the subject, you're wrong, for I owe a lot to my Ford Country Squire. Everyone expects the editor of an RC publication to be an expert flyer but with a seven day work week, flying to me is a bi-annual affair. Which is quite fortunate, really, since a proficient flyer I am not! To be quite frank about the whole thing, the thought of flying a low wing, .60 powered competition aircraft teriifies the hell out of me, and requires the immediate remedial action of a couple of Black Russians. Our advertisers, however, could care less about this unknown terror, and insist that their products show up in the pictures that we take at our secluded flying spots..."

Quote: "Hey Steve, Here is Don Dewey's Country Squire. This a 4 Channel... published in January 1969. I have the magazine and will try to post the article. This looks to be a very rugged plane...Thanks," 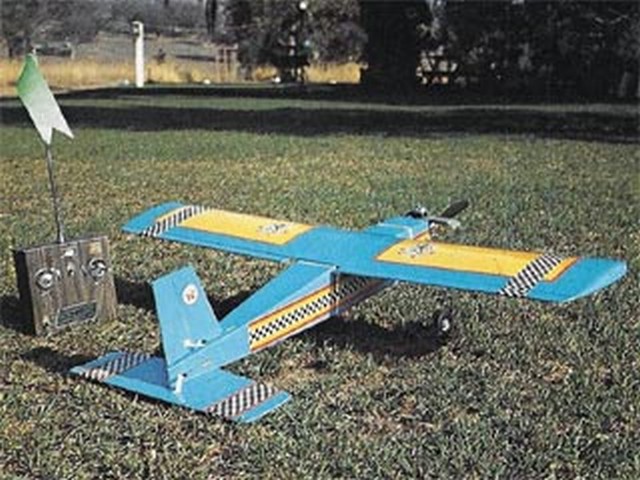