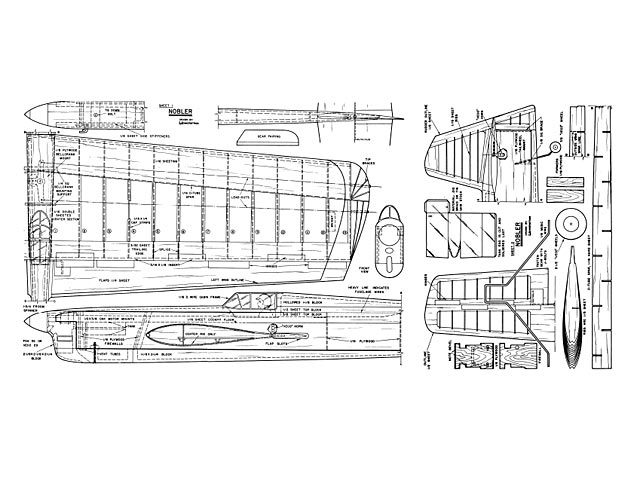 Nobler. Classic CL stunt model. This is the Nobler as it first appeared in the pages of MAN in June 1952.

Quote: "Stunting CAN be Smooth. Part One. By George Aldrich.

For appearance, smooth flying in the wind, the author combined large size, greater weight, flaps, long nose, to win the Plymouth internationals, and just miss winning the Nationals. Here he outlines background for his design.

After four years of steady building, observing, then designing and building again, this person was beginning to believe he was just not meant to be one of the elite in contest winners. The 1949 Nationals really began my extreme experiments with stunt models, for there I met Bob Palmer who taught me much of what I know today. As most stunt addicts know, he was the first to use flaps working as a source of lift on models. This constitutes what I have leaerned from Palmer, and what experience will teach anyone.

After the 1950 Nationals, where I placed fourth, I was determined to build a model that would fly in the wind. The wind at those Nationals was terrific. I lost valuable points for maneouvres that the model was not capable of performing due to weight added in obtaining a good finish. When I sat down in December of 1950 and began the drawings for my new model there were three things in my mind:

1. Smoothness
2. Appearance
3. A model that would fly under all weather conditions.

Before I go any further I feel it necessary to explain why I use flaps for stunt flying. In the first place, flaps, when moved, add an extra large amount of lift to the wing. With this extra amount of lift, it stands to reason that this will cause a very decided change in flight - much more than is needed to perform the present AMA stunt pattern much less a smooth one. Since a model that is to be judged for appearance must have a good finish, it will naturally weigh more, A model that weighs & considerable amount (35-47 ounces) will not be efficient enough to perform a smooth stunt pattern when powered with the .29-.35 displacement motors. Some would say decrease the size of the model; others, Increase the power. Both give a model that travels too fast for a pattern that is easily seen. With the increase in lift, a model may weigh as much as three pounds (as mine did) and still do a pattern that is very slow but very close to faultlessness. In the months that I have flown my model, the first thing that anyone has said about it was, 'Golly, it does everything so smooth.'

I inverted my motor for one reason only, appearance! Since I did do this, I raised the thrust line high enough to cause a 'pulling' effect while the model was in upright flight and in inside loops. To counteract this, along with a fairly long tail moment arm, I added considerable nose moment, as you will notice in the drawing.

Though my opinion is not shared by everyone, by any means. I think it is much harder to fly a pattern that is slow and easily seen than to fly one that is so fast that the judges only know that you did the maneuver. When you fly slow, the judges have every opportunity to see the maneuver. Thus you must be much sharper in the ways of precision flying. A model that is stunted at a speed over 70 mph cannot be made to fly precision acrobatics nearly as perfect as that is down at slower speeds. If one is willing to spend a few more hours practicing his maneuvers, he will he awarded flying ability he never believed possible. After all, the rules call for precision flying, not spectacular speed, and tightness.

All this data is worked out for a model of not under 495 square inches with a .29 or .35 for power. I believe a model any smaller than this in power to size will be too fast for accurate stunting. Out of all the models that 1 have seen flown in all contests, there have been few that I felt were really smooth.

Here are a few things that I find more than useful in my practice flying. I start flying a model on the drawing board. That is to say, I trim the model as much as possible while I am building it. You must trim a stunt model with as much care as you would trim a free flight. You will note the sketch shows where the greatest amount of trouble arises in flap models. Notice the warps in the wing. These would cause the model to drop its inside wing panel. All you have to do is to place your thumb and forefinger over the spot on the flaps where the control horn is set into the wood. Apply pressure in the opposite direction of the warp by twisting. This will spring the horn wire and thus counteract the warps..."

Article pages, text and pics, thanks to dfritzke.

Clearer version of article, in one file; plus tiled version of plan for printing. 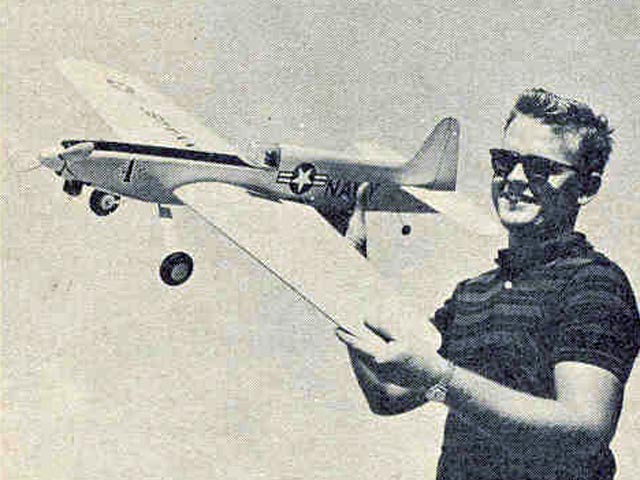 Hi Steve and Mary - This is a 21 page file on the Nobler [clearer version than the original 2-parter]. It includes both parts of the article "Stunting can be Smooth" by George Aldrich along with my CAD full size rendering of the Nobler (oz377). File created around 2010 and also includes tiles for those having trouble getting a full size print.
rchopper56 - 17/10/2016
Roll Out. Hello Mary And Steve these are part of the models that I have made during the COVID 19 quarantine both are Nobler [007-009]. A greeting,
AntonioRG - 05/08/2020
Add a comment