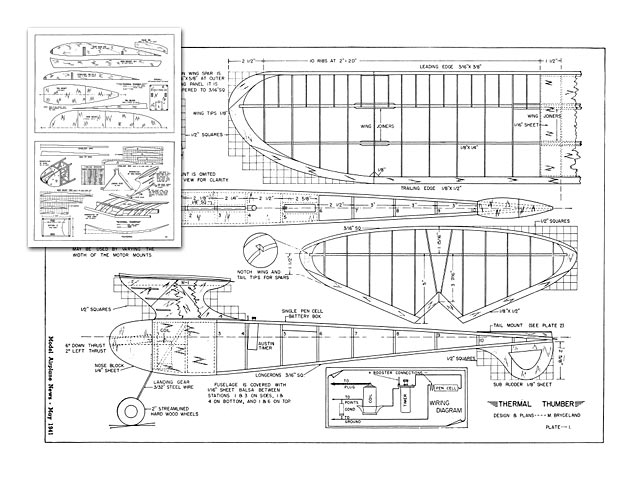 Quote: "This Class A Gas Job Is Easy to Build and Will Win Contests for Novice or Expert. Thermal Thumber, by Maurice Bryceland.

IT IS necessary, besides having time to construct this ship, to have a really serviceable pair of lungs and an automobile. It has been our misfortune that, besides breaking a car-spring chasing across the flying field's rough terrain, to also experience subsequent stiffness and sore lungs from chasing the model on foot. The original model was lost on a 6.05 min test-flight at Hadley Field, New Jersey. This occurred on the fifth test flight. while attempting to secure proper flight adjustments. After searching two days, we gave the model up for lost and went back into the work-shop to build another.

At the next contest at Hadley Field on its first flight, the ship lived up to advance efforts, ringing up a flight of 3:55 min. Unfortunately motor trouble developed, preventing any more official flights. The following week, after an official flight of 3:12 min, the engine 'seized on' the runway necessitating a change of motors and a subsequent test flight to see if any variance had occurred in the thrust line. This flight on a nine-second engine run disappeared 17 min 11 sec later. To date we have not had word of either the models - and was getting tired of making one a week and losing it over the week-end.

A close friend, impressed with the po-tentialities of the Thermal Thumber, had already started building one in anticipation of the annual contest at Creedmore, Long Island. At this contest, after two test flights, the Thermal Thumber 'jinx' was finally broken when he got in three 'officials,' thereby clinching first place. On the last official she flew out-of-sight after 4 :58 min., but our luck held as it was later returned to us by Gorden Murray of the Sky-Scrapers, who 'fished' it out of Lake Success.

Some other adventures of the Thermal Thumber were: On November 17, 1940, the Thumber took 1st, 2nd and 3rd at the annual 'Frost Bite' Gas Model Contest sponsored by the Vineland Aeronauts at Bucks Flying Field, Woodruff, New Jersey.

1st in Class A was taken by Andy (Yuditsky) Stavast of Bloomfield, New Jersey. The outstanding feature of this was that the model was completed the night before the meet and it was Andy's first contest.

2nd in Class B was won by Walt Schroder with his perennial contest winner. This is the same plane that performed so sensationally at the annual Creedmore meet.

3rd in Class B was won by partners 011ie Hibbens and Andy Stavast.

All the above are members of the Strato-Bums of Bloomfield. It might be well to note that the 'Bums' took five of the nine open places in this contest.

Building and Flying. The first step in building the Thermal Thumber is enlarge the plans to the required size. This may be done on anything from brown paper to regular drawing paper ; we have even used wallpaper on some occasions. The 1/8 in squares shown on plate one should be enlarged four times to 1/2 in squares. The easiest way to do this is purchase some 1/4 in square graph paper, the kind you use in high school algebra, and use two squares for every one shown on the plan. In plotting the outline of the various tips a pair of dividers comes in very handy..."

Article pages, text and pics. This includes the drawings as originally printed. 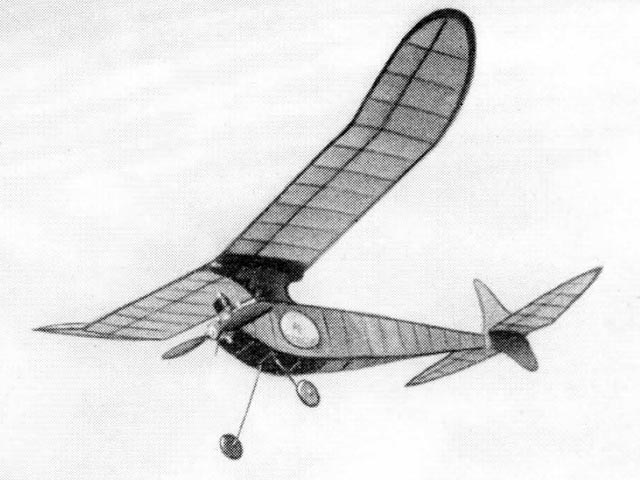