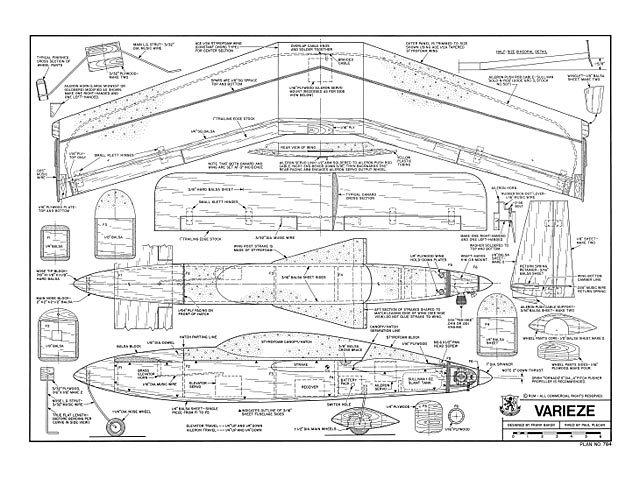 One of the most spectacular airplanes to appear on the homebuilt scene has been Burt Rutan's Varieze. The aircraft is unusual for both its composite structure (fiberglass over foam) and its canard planforrn. In addition, the Varieze has unusually high performance relative to its modest power. Since I live close to Oshkosh, Wisconsin, where the EAA annual convention is held, I have been able to inspect the plane and watch it fly. It is every bit as spectacular in the air as it is on the ground. Last year there were four or five Varieze's at Oshkosh and the workmanship on all of them matched the usual pattern R/C model. Also a forthcoming space epic movie will use a small fleet of the Varieze as space style fighter aircraft.

When the Varieze first appeared, I looked at it from the point of view of an R/C model but decided that there were too many unknowns. About a year later, I read an article in the EAA magazine Sport Aviation mentioning that Mr Rutan had been an R/C modeler for many years. Being rather quick to recognize a truth, I decided that he had probably built and flown a lot of canard R/C models. Armed with this knowledge, I proceeded to build a quick approximation to a Varieze. True to the original Varieze, I put a Vector Director on the front canard to give both ailerons and elevators via the canard surfaces. When launched, this model would initiate a slight bank and never recover from the turn. I promptly shelved the model.

The next flying season, I noticed that Mr Rutan had added ailerons to the main wings and turned the canard surfaces into elevators, so I did likewise. On the next test flight, I launched from the top of a hill. The plane went out straight as an arrow. Application of ailerons yielded the fastest roll I had ever seen. However, it still wouldn't turn and once the nose dipped below the horizon, there was no recovery. Knowing that I was making progress, I re-read the articles on the Varieze and noticed that the wing tip rudders only moved outboard to create drag for turning purposes. I also decided my canard was too small and increased its area by a third.

The next test flight took me by surprise - the plane flew perfectly! It would turn right and left, loop, would not stall, still rolled like mad, and had a smooth stable glide. After a few flights, I decided to disable the 'kick-out' rudders and fly a pylon race. On the first turn, I discovered again that, without the rudders, it wouldn't turn - and scratch one model. Although the 'Schoolyard Canard' (RCM, May 1978) would fly without these rudders, the present model will not, for reasons that escape my limited knowledge of things aeronautical. However, it does fly. Now that the concept had been proven, all that remained was to build a pretty, Stand-Off Scale version to replace the balsa box prototype. The resulting Stand-Off Scale version is the subject of this article.

Construction. Due to the use of foam wings and rather simple framework, the construction of this model is straightforward. First, let me justify the rather sturdy fuselage. With the long span canard out in front, its tips tend to hit the ground if one makes a bad landing and they snag doorways. As a result, considerable stress is placed on the fuselage. My prototype fuselage of 3/32 sheet proved to be very fragile. The 3/16 sides on the present version are quite rugged and eliminated the breakage problem.

The fuselage is basically a box which is built upside down on the work bench as the top is flat. When installing the firewall, check to insure there are 2° built-in down thrust. Also, glue in the triangular plywood wing hold-down plates so they clear the fuel line holes and the motor mount bolt holes. You may need to do a bit of carving to insure the proper clearance..."

Article pages, text and pics. Also, PDF tracing of airfoil templates for the ACE foam wing used on this model, thanks to Rudy. 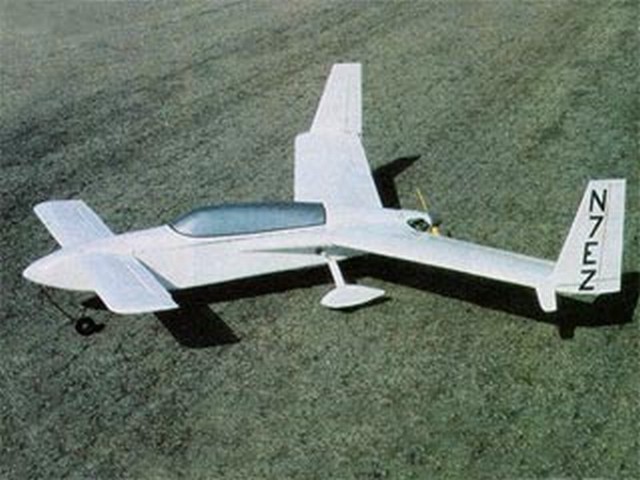 Hi Steve, Wonderful work you are doing with your OUTERZONE website - many thanks! I have downloaded a ton of the listings; it's time for me to contribute a bit too. Re: Plan ID=6203 : Varieze. The plan has no airfoils, as the model was to be built using the then-available ACE tapered foam wing set. Today's builders would have to cut their own foam wings. I have an ACE wing on hand, and have traced the root and tip airfoil outlines. Not sure if they will come out at 100% accurate size however. The chords are as follows: Tip = 4 inches. Root = 5 3/8 inches. Also, for general information, the ACE tapered wings, when assembled, have a straight leading edge. The trailing edge has the taper. The 'Constant Chord' ACE foam wing simply uses the identical root airfoil as I have traced.. Cheers,
Rudy - 27/12/2014
Add a comment