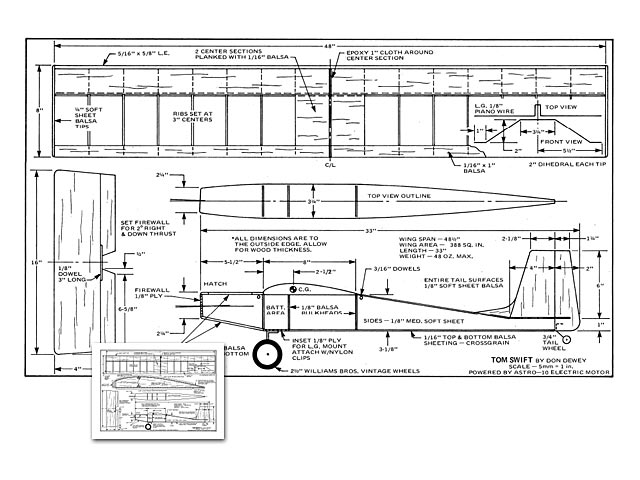 Quote: "Hi, Steve. Here is the 'Tom Swift' an electric proof-of-concept model designed in 1973 by Radio Control Modeler Magazine’s late editor, Don Dewey, for the purpose of evaluating the then-new Astro-Flight 10 electric propulsion system. This is not a full-sized plan, but everything is dimensioned and the wing’s rib template is shown actual size. While designed for electric power, it would also fly well with any .10—.15 glow or diesel engine. Back in 1977, I scaled the Tom Swift down to a 40 in span and it flew very well with a Cox Medallion .049 up front. It would be an ideal first scratch build for new modelers, and would also make a decent trainer. I would suggest reinforcing the firewall and landing-gear mount with some 1/4 in balsa triangle stock, and it would probably be a good idea to add 1/16 vertical-grain shear webs between the wing spars. A ply joiner for the wings would not be a bad thing either. Thanks once again for a great site!"

Quote: "A Quiet Revolution. Electric powered RC, the concept of tomorrow, is here now! It's future is up to you. Tom Swift, by Don Dewey.

Part One. Since radio control became a reality, it has been the dream of a great many RC'ers to design and perfect an aircraft that they could fly from the local schoolyard or from a good sized vacant field that would be an every day ship, trouble-free and above all - quiet.

As we look back over the history of lost flying sites, it has not been the hazards of RC aircraft that have led to the loss of the sites, rather it has been one factor alone - noise.

Think for a moment, if you will, about being able to go to a vacant field a few blocks from your house and put in two or three flights right after dinner before darkness settles in. Think, too, of doing this in a completely noise-free way with no clean-up problerns, very little field equip-ment, and none of the associated problems attendant to todays present Fuel-gulping two-cycle engines.

What were talking about, of course, is electric power plants for RC. While there have been sporadic attempts during the past few years to develop a practical electric engine for RC aircraft, most of these efforts have been centered around the use of a geared, re-worked toy, or slot car motor. The results were, for the most part, definitely unsuccessful and quite impractical. One company, Mattel Inc, even produced a ready-to-fly electric aircraft using this concept, and in our opinion the results were something far less than successful. Word of the attempts soon spread, and the idea of electric propulsion for RC has been, more often than not, dismissed with pure disdain.

It wasn't until Bob and Roland Boucher of Astro Flight inc, 13327 Beach Ave, Venice, California 90291, began to develop their Astro-10 and Astro-25 electric propulsion systems that a breakthrough in this field seemed possible. The Boucher brothers gave their first demonstration flight of electric powered RC in April of 1971, in November of that same year they entered an electric powered pylon racer in a Quarter Midget race using their Astro-10 system. Their development of the electric power plant continued until they made a twenty mile world record flight for electric powered aircraft in February of 1972. Five months later they introduced the Astro-10 and 25 at the MAC'S show..."

Article.
Alternate version of the plan on a single sheet, thanks to theshadow. 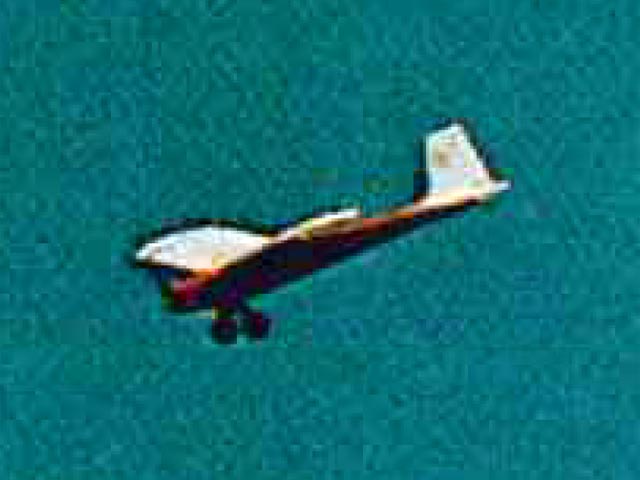 Attached is the complete article for "Tom Swift", which is the first electric RC model I built. On the third flight, the model came crashing down with very few pieces that were recognizable. The cause was a failed receiver. A year later, I built a second "Tom Swift" although with ailerons. A great and easy flyer. The GREAT Don Dewey created another winner.
Keep up the great work, thanks for all you both do and have a really great weekend
rocketpilot - 07/06/2021
Add a comment