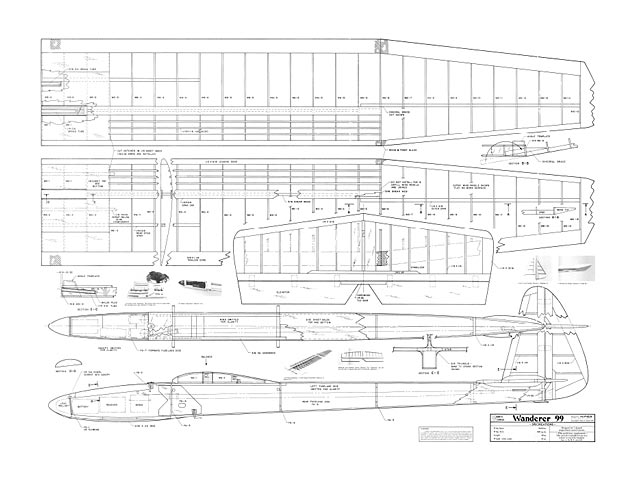 Quote: "I have a file copy of this glider for your website. The files are of: The Plans, Manual in text, and the Photos for the Manual. Mark's Models Wanderer 99. Designed and kitted by Mark Smith. Thanks so much for your effort on this site. I have downloaded some really nice planes that I never even heard of. Now I'd like to add what I have for others to enjoy as I have."

The Wanderer 99 is the latest effort of Mark's Models. It is hard to find the collective noun to cover all the Smiths. Most of you glider guiders have flown with Mark, you also know the head of the family Rod, but do you know the other Smith? He is Al Doig Smith, he wrote the book, the instruction book, that is. This is the bunch of Smiths that got together and put out the great Wanderer 99 kit.

There are times when you are aware as you stand out there in the middle of the launch area, your plane in one hand, the transmitter in the other and a high start strung out to its maximum across the field that this plane is going to fly and fly well. In the Smith tradition (see page 16 of the instruction manual), it was never tested by hand launching out over the well-known field of soft grass. Here in Southern California the soft grass which grew so profusely during our past wet spring has now turned golden brown and the ground is the consistency of adobe bricks. It was just confidently attached to the high start and heaved into the air. It went straight up like an arrow without a single touch of the rudder control. The lift was not spectacular and in about 5 minutes it was low enough that it was deemed necessary to bring it back to the proximity of the field. Still too high she swept across the landing strip and gained a few feet, a quick turn brought her back over the field where more height was gained. By working the field, enough altitude was gained to go looking for another thermal. A fantastic plane, heavy enough to penetrate and light enough to soar on the weakest lift.

When building the plane, we discovered how easily it went together, it is a plane that can be built by a beginner as well as the expert. We were particularly impressed by the manner in which the dihedral was constructed into the wings using the wing wire tubing. The wing wire tubes are imbeded horizontally into 6 layers of 1/8 ply pieces which are cut to the dihedral angle. This sandwich is epoxied into one piece using clamps that are included in the kit. When the epoxy sets, this sandwich is cut in half and each half is then again imbeded in epoxy between the spars of each mid-wing section. Don't concern yourself about this wing folding in the middle - it won't.

In the past, when construction was completed on a glider, it was necessary to look around for something out of which to make the skid. The skid is included in the kit. Two pieces of hardwood are bent to the shape of the bottom of the plane and glued together in this position. When dry, they will remain in the curved shape and may be attached to the bottom of the plane with strips of servo mounting tape. If would be advisable to give the skid a coat or two of epoxy in case you are flying from a hard surface.

Al Doig wrote the instruction book, it is not dull like most, Al has a way with words - it is interesting, humorous and well done. Do read it from cover to cover, as he directs, before you start on the plane. Build the kit as he says, he is right.

There is one additional bit of information that for some reason was omitted from the book, be sure, and SURE is emphasized, that you seal your plastic covering material to every rib and spar, top and bottom. Don't just seal the covering to the leading and trailing edges then shrink with a heat gun. Oh! yes, it does make a beautiful covering, no bumps, no lumps, and absolutely no STRENGTH. Seal the ribs and spars then shrink the rectangles formed, this will give maximum strength.

After sanding the die-cut sheets on both sides, use the centerfold layout of the instruction book and mark the numbers on each wing rib before you punch them out. This will help immeasurably when you are building the wing. We would like to recommend a 1/8 x 3/16 balsa doubler on the top and bottom of each former. The grain is vertical and they tend to bend if you squeeze the fuselage too hard. The triangular doublers used on the empennage really put strength where it is needed. When you epoxy the elevator and fin to the fuselage, punch many small holes in the two contact surfaces - do the same for the doublers. When the epoxy sets, it is like using epoxy nails to hold the two surfaces together.

It is going to take some weight to get the plane balanced out at the Center of Gravity no matter where you put your equipment. Be sure to cut out the center of the first former and hollow the nose block as instructed then put your battery as far forward as possible. The RCM prototype weighed out at 39 ounces and it took 7 ounces of lead to bring the CG forward to its proper position - this brought the total weight to 46 ounces, which is the recommended weight for the kit. Don't worry about the extra weight, the airfoil is thick enough to handle it." 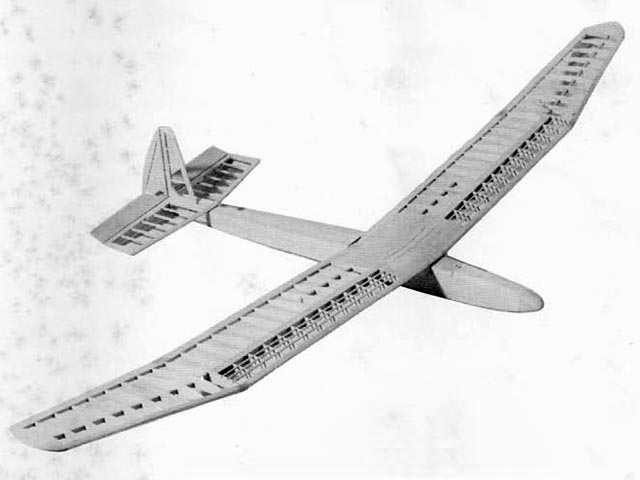