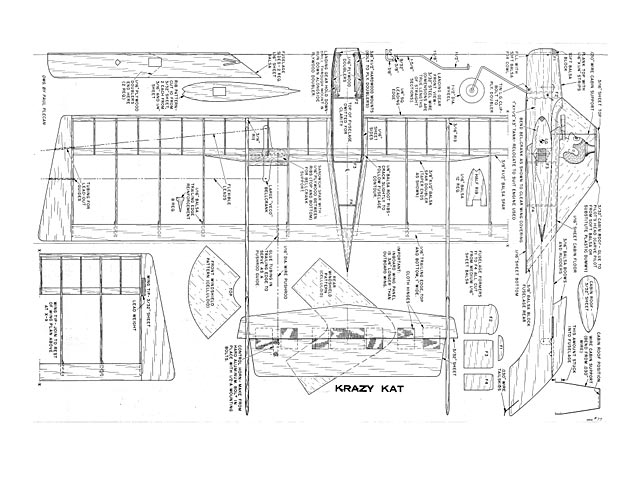 Quote: "Most of us enjoy building a model that is different and has eye appeal. The principal reason one would have for building a model of this type is the enjoyment of flying it. Because of this a high standard of performance was a 'must' in the design of this model. Analyzing the design will show that basically the model is conventional in layout in that areas and moments used suit good stunt performance. Convention is camouflaged by the use of a huge cabin, booms and several other points as shown in the plans.
A model designer gains a degree of satisfaction any time he can come up with a somewhat different craft which performs up to expectations. It is commonplace to hear modelers make comments on magazine designs as being similar to some previous ship. In appearance the 'Crazy Cat' should be somewhat removed from the run of the mill model. (Who in their right mind would design a similar ship?)
With only a very small percentage of us being contest fliers, modelling basically is a hobby indulged in for pure enjoyment and fun. This model is aimed chiefly at those who agree with this philosophy and do want fun. However, if built with only reasonable care, I'm sure the resulting performance will please the majority of contest fliers. Try it in a few local stunt meets, you might be surprised!
The original model represents what started out as a one night building marathon. One Saturday evening I felt I could build the airpl.ane completely and fly it the next day. By about 2:00 a.m. all of the woodwork was done and all that remained was covering the wings, installing the celluloid cabin and all the finishing. This is where we ran out of energy and gave up. About two or three Saturdays later building, energy returned and the model was completed and flown the following day.
The original model was test hopped at Lake Mohawk, NJ on a solid ice-covered field. This made beautiful take-offs and landings possible." 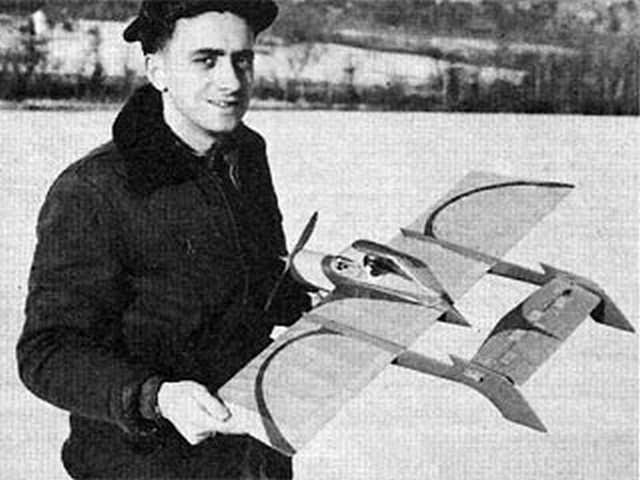