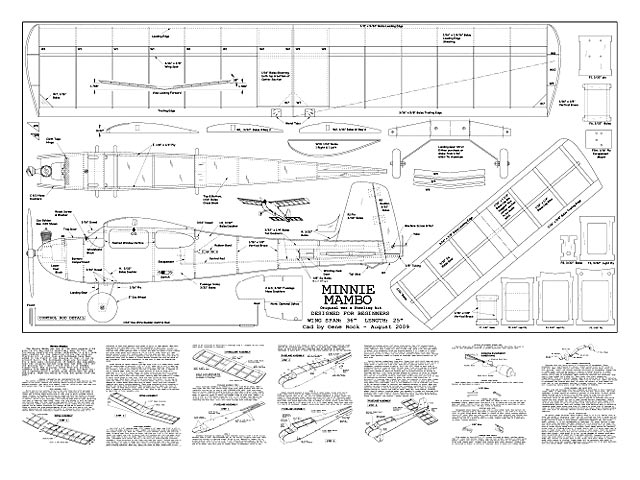 Modern redrawn plan in PDFvector format, of a Sterling Kit. Single channel RC trainer. Includes full text of build instructions and some notes on changes from the original plan.

Return to the simplicity of R/C's yesteryear with this authentic kit of one of radio control's most popular early planes.

The August-September 1961 issue of FLYING MODELS contained an ad by Sterling Models of: a New 1/2A R/C. The ad read: Designed with the Beginner in Mind - So Easy to Build - So Easy to Fly - It's Sheer Pleasure! - MINNIE MAMBO. The ad goes on to state: You'll fall in love with Minnie the trimmest, easiest-building 1/2A R/C model you've ever seen! Imagine an R/C model so easy to fly you can launch it without even taking a step! And such a cinch to assemble that it's a natural for beginners.

Well, Early RC Products, a division of Wing Manufacturing, has captured all of this in their Minnie Mambo kit. I had the pleasure of building and flying this little jewel and it lived up to all of my expectations, given the reputation of Early RC Models' quality and authenticity. As a member of the Vintage R/C Society, I am always concerned with the authenticity of any vintage design I build and this Minnie Mambo is just like the original regarding outline, airfoils, wing and stab placement and landing gear. The kit is very complete, with all wood required and a very nice aluminum landing gear. Fuselage parts are laser cut and need-ed no modifications because they fit so well.

I won't make this a 'glue this to that' review since the kit comes with a very excel-lent instruction booklet complete with eleven colored pictures and adequate text to guide you through the building process. I will however tell you of two modifications that I made to the plane.

First, I decided that I wanted some flexibility in engine selection so I relocated the firewall rearward in order to accommodate a small tank mount for the Cox .049 engine. Doing this allowed me to use a Baby Bee as shown on the plans as well as a TD with a tank mount. The plane will fly very adequately with the Baby Bee but this engine has a very small tank and therefore a limited engine run time. Tank extenders are available at flea markets for the Baby Bee which will almost double the run time.

Being interested in aerobatics as I am, I decided to put a Cox TD in the nose for more power needed to do loops and rolls, Yes, I did say aerobatics, and this little plane will roll and loop with the best of them when the TD is at full power. Oh yes, those little engines used a rotating exhaust restrictor to throttle the engine and my TD idles very well using this technique.

The second change I made was to glue a small strip of balsa, cross grain, to the bottom of the fin. The original design as well as this kit calls for attaching the fin to the fuselage with a butt glue joint and no fillets. The attached balsa allowed me to cut a slot in the top sheeting of the fuselage for the fin and glue the fin into the slot which was done after covering and painting. I have a thing about butt glue joints without fillets from my many years of modeling so I made the change so I could sleep better.

While building, I did discover several errors in the plans, instructions and packing list that details all of the materials included in the kit. A few phone calls to Dan Gipe at Early RC Models and those errors were quickly noted and I received updated plans from Dan. By the way, my Minnie is rudder and throttle only, however the plans do show a stabilizer with elevator as an option. I did find the need to open the fuselage slot for the stabilizer a bit since I covered the stab before assembly to the fuselage.

The first flights were made on August 27 and the apprehension of the first flight on a rudder only plane reminded me of the '50s when I got into this great sport. In those days it was common to test glide a rudder only plane before powered flight. However, I decided to have faith in the de-sign, remembering that ad in FM, so I hand launched the bird at full throttle. That little TD .049 took hold and up it went into a nose high attitude, so I quickly re-duced the power for a gentle and gradual climb. The rudder response was fine with 1/2 inch throw and now I flew around to get the feel for the plane and reduced the power to a low idle to find out what it might do when the gas ran out. To my surprise, the Minnie continued on a very gentle descent and almost defied gravity as it glided around the field for landing. Not a problem! The little plane touched down as gently as could be and stayed on its feet.

The second flight would be the test of the Minnie's aerobatics skills. The first flight showed me that high throttle on the TD would probably provide enough power to do some barrel rolls and loops. Sure enough, the Minnie felt right at home rolling around that imaginary barrel in the sky, so much so that I was able to put a string of three barrel rolls together at the same altitude. Now to try a loop or two and with the TD turning the 6-3 prop at high rpm, it went through two loops with little effort. Of course, a spiral dive was needed to gain enough speed to initiate the loops.

I must have looked like a little kid with his first successful flying model as I cleaned up the plane and left for home to write this review. What a neat experience after just flying my 2-meter precision aerobatics model in competition the week before. Then I remembered again just why I love to fly the vintage R/C planes that we fly at the Vintage R/C Society reunions.

Plan to add this little plane to your hangar and you won't be disappointed with the Early RC Models kit or the flying characteristics of the Minnie Mambo." 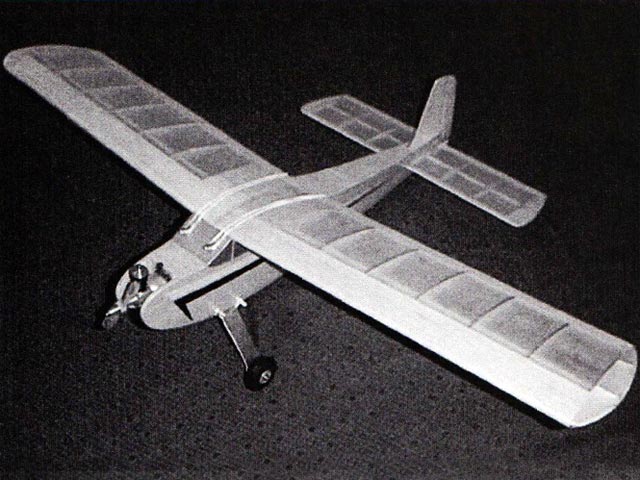