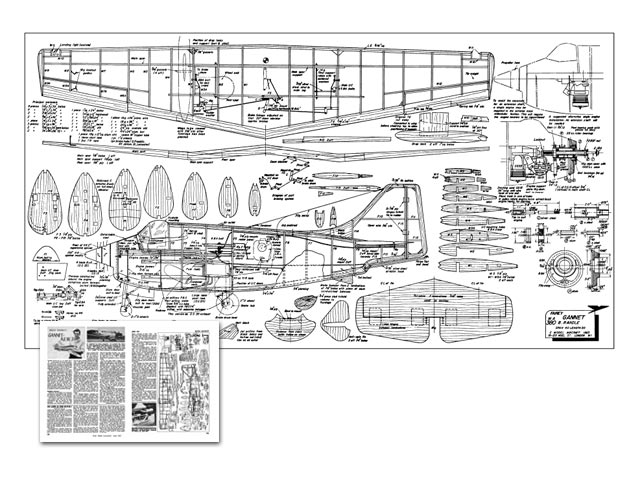 Although the colour photo [see more pics 003] is an Aeromodeller cover, the plan was actually published in Model Aircraft, June 1963.

Quote: "In response to many requests, we present the plans for this nriagnilicent 1962 Nationals winning C/L scale model. The ingenious dual engine installation is an engineering project, but the model can also be built as a 'single' by those without workshop facilities.

THE aircraft XL 451 of which this is a scale model, was the third production Gannet and was one of the prototypes that was chosen to establish the deck-landing performance of the AEW-3. With the aircraft fully equipped, a total of 48 arrested landings and free take-offs were made.

The most notable feature of this model is the fact that it is powered by two engines, both completely independent units, one of 6 cc and the other 2.5 cc (glowplug). Although there are two engines, the aircraft is capable of cruising on one engine alone, like its prototype. The twin throttles are interconnected to the flaps and arrester hook and all are controlled by a third line.

The necessity for the aluminium nose construction is evident by the fact that it houses 24 roller bearings. The two vents directly behind the cockpit are for a gravity feed lubricating system and engine access is obtained by three removable cowlings.

Building Sequence: These are not intended to be exhaustive instructions as this model is only intended for advanced modellers, but this sequence of construction will save a few headaches.

The wings are made first in the conventional moaner, LE, TE, ribs and spars, remembering that the ailerons are built separately. The fully machined and assembled main undercarriage is bolted in place, complete with doors and struts before the bottom of the wing it sheeted. F.4 and F.5 are now attached to the front and rear spar, carefully checking the alignment.

Build the 3/32 in fin outline on the plan, cement the two 1/8 ply arrester book mounting keels in place and the 1/4 sq in tailplane mountings. Build up the tailplane and elevators and when dry sand to section. Cement this assembly to the mounting. Make up bellcranks 1 and 2 and install..." 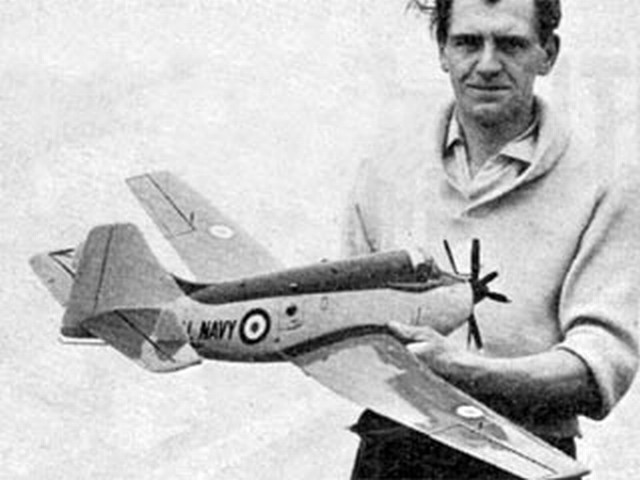