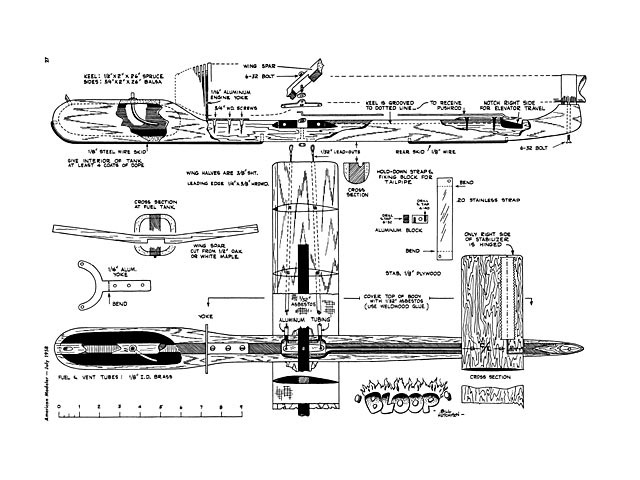 Quote: "Bloop. You think jet powered control line flying is tough? Nothing to it, declares Bill Hutchison. He makes it sound so simple. Just don't fly as a holy terror near the church on Sunday am!

To our way of thinking, jets are not enjoying the popularity they deserve. Manufacturers have developed engines that are light in weight, have an enor-mous amount of power and require almost no maintenance or reworking. They start quickly and are easily capable of hitting 150 mph right out of the box, on plain ol' gasoline. You can fly at sizzling speeds without breaking a prop, becoming a Jr scientist on fuels, or wearing out your ship in an effort to find the best diameter and pitch. The manufacturer has seen to all that and the only thing you have to supply is an airplane capable of handling the jet's power.

The model, in too many cases, isn't as reliable as the engine. Our own first attempts and others which we saw at contests, testify to that. Getting off the ground seems to be a common problem and it was ours on early ships. Using push instead of pull to make headway creates design problems, while heat and high speed make it necessary to adopt different methods of construction. These things, we learned the hard way, through trial and error.

A poor fuel tank prevented our first ship from ever getting into the air, the engine would conk-out from air bubbles in the fuel line. We tried sliding the model off a smooth asphalt parking lot, a baseball field, even the top of a car, but the engine always died so we went home and designed a better tank.

Model number two would get off okay but it flew erratically, causing engine failure after it was airborne so it was back to the drawing board to create an-other airplane.

Number three flew beautifully, it was easy to handle, it was fast but fragile and we soon returned to the workbench to build another ship. Each new model had solved a problem but we wanted something on which to experiment be-fore it hit the scrapbox, so we sat down and designed and built 'Bloop.'

When we had finished building Bloop, we had what we wanted, plus a little more. Bloop went bleeping around the circle at over 150 mph, which isn't bad for something you intended to use for a flying lab and one version, with a thinner airfoil, blooped along at a super 167.4 mph, which, for Bloop is really bleeping.

Bloop was never intended for competition but it will go as fast as many we've seen entered in some contests so you might do well to take it along as a spare and try to cop a third place with it.

Flying this ship is nothing but pleasure; you simply lift it off the deck, put it where you want it and leave it there! In calm air, Bloop streaks around the circle like it is riding in an invisible groove and all you have to do is hang onto the handle. In high winds, it reacts smoothly and easily with no tendency to jump upwards or dive in. We've flown a lot of models including goats, (converted free-flights in the early days of U-Control), and none of them handled more easily than Bloop. It would make a good trainer if it weren't so fast.

If you've given up on jets after an unsuccessful try, or want to get off to a flying start on the first attempt, you will want to blibble your own Bleep, so here's how to build your own Bloop:

Start by making up the metal engine mounting parts. On the original, we used a truly stock Dyna-Jet, none of the fins were removed and no cowling was placed around them. We merely slipped the yoke between the head and the first fin, looped a piece of safety wire through the holes in the yoke and twisted the ends until it was tightly in place. The fins keep the engine from moving fore and aft and there is no strain on it up or down and the wire will hold the engine in place even in a violent crash. Get a good fit when you make the fixing block and hold-down strap for the tailpipe, the block should fit squarely and the strap must be snug, it will cause trouble if it's not. When these fittings have been made, you can start building the fuselage.

Lay out the lines of the keel on a piece of spruce that is free of knots or other imperfections. Draw the location of everything before you make any cuts. The size of the keel blank is 1/2 x 2 x 26 inch. A notch 2-1/4 in long and 3/8 deep accommodates the bellcrank and the hole at the center of the notch is 12-1/4 in from the nose. Using a square, draw these lines across the two inch width of one side of the block. Measure back 7-3/4 in from the center line which represents the bellcrank and draw another line across the block, this locates the leading edge of the stabilizer..."