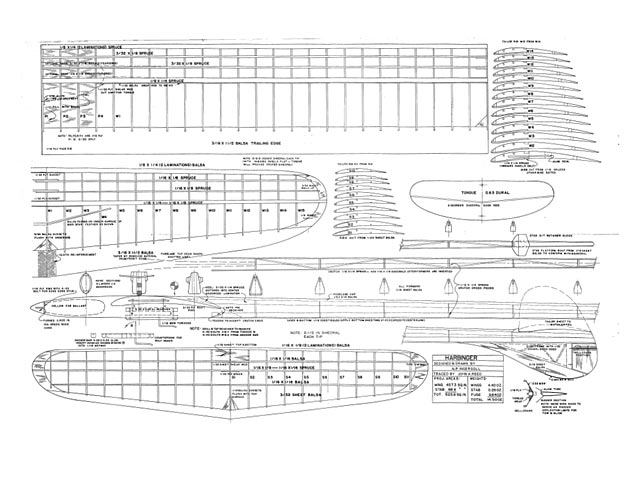 Quote: "The original plans for the Harbinger were drawn up during the late months of 1960. The general concept was to produce a model that would be capable of performing at a consistently high standard in 0-20 mph winds and variable weather conditions. This comprehensive goal demanded a multiple design criteria of:

A slightly modified Benedek B7457 d2 section was selected for the wing and the remainder of the design tailored to accommodate its suspected qualities. The wing configuration is the result of an attempt to blend efficiency, structural strength and weight distribution.

The V tail is employed to reduce the required size of the underfin and to help keep the stabilizer tips free of ground obstructions. The short nose moment is used for stability and displacement recovery. Special attention was given to overall cleanliness, weight distribution (ie light extremities) and structural continuity throughout the total design.

The prototype was not completed until October 1961. It was possible to get in less than a dozen flights before winter set in, but these were promising.

When the salt flats of Utah hardened in the Spring of 1962, testing was resumed and it became increasingly apparent that the model had the good all-around flying qualities that we had hoped for. This first model had 439 square inches of projected area in the wing in conjunction with an 18 percent tailplane.

Later in the year, we qualified for the Western zone semifinals and subsequently won the Nordic team position in Kermin, California, on Labor Day weekend, 1962.

A second version (the subject of this article) was prepared for the 1963 World Championships in Wiener-Neustadt, Austria. The major changes consisted of increasing the projected wing area to 457 square inches and reducing the horizontal tailplane to 15 percent. This was done to take maximum advantage of the allowed area and because the anticipated stability problems with the Benedek airfoil had failed to materialize. Additional structural refinements were incorporated, but beyond this the original layout was kept intact.

This version showed no deterioration in stability during flight and the dead air duration was increased by 10-15 seconds. The second model was used in Austria, where a technical problem in the second round spoiled a potentially good score. It was later flown in Tulare, California in 1964 to gain the team position for the second consecutive time and in the 1965 World Championships in Kauhava, Finland. Responsibility for the sub-standard performance in that contest is assumed by the tower and should not reflect on the qualities of the model.

Beginning in the latter part of 1963, a number of requests for plans were received. Surprisingly, several of these inquiries came from Kansas where the normal flying conditions are probably as rugged as those found in any section of the United States. Several copies of the design were constructed by Frank Monts and his son Dick of Wichita, Kansas. Dick established a national junior record of 20 minutes 35 seconds at the 16th Annual Tulsa Glue Dobbers contest in June of 1965 and went on to win the junior event at the Nationals in Willow Grove with the same model.

The model shown in the photographs has recorded over 300 flights. From the beginning, line stability has been excellent, vices minimal and - with the notable exception of Finland - the model has always been characterized by smooth, buoyant gliding qualities..." 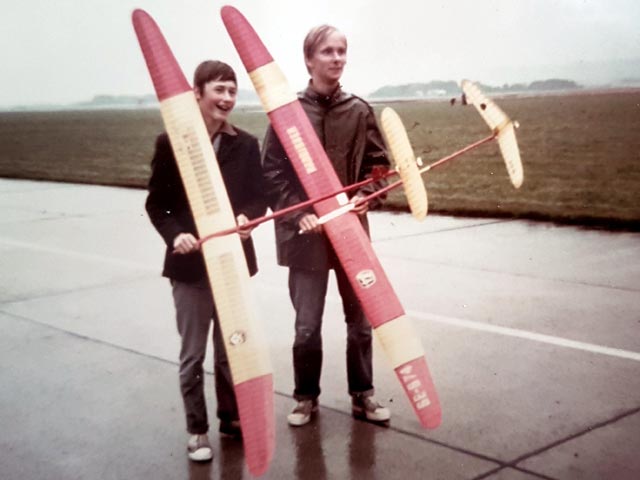 I built my first Harbinger in 1966, won my second Swedish junior championship with it in 1967. Totally 5 Harbingers were built, slightly modified (no V-tailplane). I qualified for the Swedish national FF-team in 1969 and 1970.
At WC-69 in Wiener Neustadt, at the age of 18, I placed 25th in F1A and placed 17th at EC-70 in Homburg Saar with Harbingers. I used Harbinger at contests until 1973. There were 3-4 other guys in my free flight club who also flew Harbingers with success.
Michael Borell - 08/11/2020
Hi, I started competing w free flight gliders at the age of 12 in 1963, starting w F1A in 1965. After having read MAN sept 1966 I used Harbingers in F1A competitions between 1967 and 1973. 5 Harbingers were built, I had V-tail on my 2 first ones but modified the following models with straight tailplane. Some other guys in my FF club in Östersund also used Harbingers. I enclose 3 photos:
1968 [main pic]: Aged 17, Karl-Gunnar Modin & Michael Borell placed 1st & 2nd in F1A at Swedish Nats. One Harbinger w V-tail and the other w straight tailplane.
1969 [pic 005]: Michael Borell with Harbinger #3 at Wiener Neustadt at WC-69. Placed 25th.
1970 [pic 006]: Michael w Harbinger #4 at European Champs in Homburg, Saar. Placed 17th.
I quit competing in Free Flight after WC-87 in France. Best regards from Sweden
Michael Borell - 09/11/2020
Add a comment