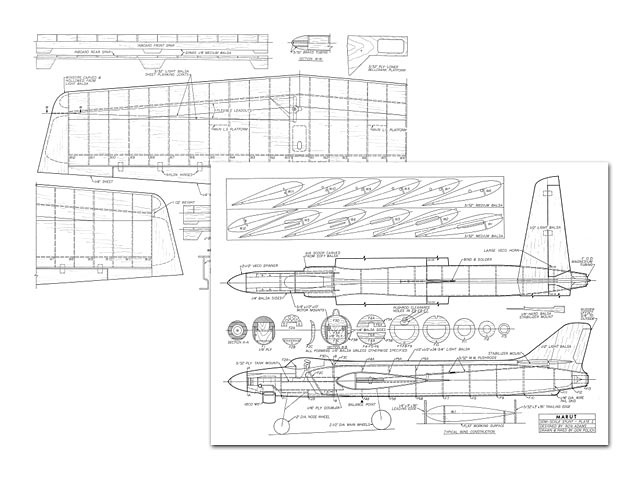 There are many trends in stunt design, One of them Leans toward military jets. Scale-like details and five or six ounces of pressure-sensitive lettering are very important for gaining 'impression points.' Jets lend themselves to all sorts of delightful lettering, beware jet blast, cockpit emergency release, ammunition storage, etc. The Marut, big and heavy, follows my reasonably successful Navy A6A Intruder.

Looking through a series of books of three-views, I came across the new jet designed by Kurt Tank of Fw190 fame. This one was designed for the Indian Air Force with a Mach 2 capability and had the long straight lines necessary to show off the pattern maneuvers. The plane's profile really grabbed me, so I drew it up as a stunt model.

Before going into construction details, I should explain some of the reasons I design big models in the 850 sq in class. A couple of years ago I worked out the design for a model based on the Navy A6A Intruder, which featured an exhaust system of magnesium tubing to feed all gases and gook out of the back of the plane. With the added weight of the exhaust tubing and a very unfortunate experience in finishing, the plane came out so heavy that I was afraid to weight it. Since I could still lift it with one hand, and it was all I had, I flew it anyway. Wonder of wonders, it flew rather well, particularly in the wind.

The first contest was the Niagara Falls Invitational held by Dave Gierke and attended by most of the top fliers in the country. I managed a third place, which did not make me at all unhappy. The next contest was the Michigan State Meet and I came in second, just a couple of points behind Jerry Worth.

Work got in the way of the rest of the season until the Nets. I went there with literally no flights in practice and ran into my first experience with loose head bolts—no start. Finally found the trouble and was so shook I left out the triangles. Second flight left me one point out of qualification. My fault, through lack of practice, and definitely not the fault of the plane.

After the season, I finally got up enough nerve to weigh the model-98 oz.! Twice the 'weight everyone else was used to. According to all the scuttlebutt, the thing should never have left the ground, let alone place at a major contest. Actually, there was no real reason to have the plane weigh that much. I had built it in a week after loosing a wing. In trying to rush for the Invitational, I tried a new synthetic finish that didn't work too well_ I just built up a lot of weight, trying to quickly cover the bad things happening underneath. The factors that enabled a heavy model to fly reasonably well, I believe, appear to be large size, long span, and a good disc area on the prop. Let's take a look at each item.

A basic factor in aircraft design is a dimensionless unit called the Reynold's Number. Rn equals the air density times speed times chord divided by the air's absolute viscosity. This number is used to designate changes in the character of airflow around an airfoil. In general, the higher the Rn, the more performance you can expect to get. There is a maximum limit to this, but we are a long way from supersonic in stunt.

According to the formula, we have several ways of operating at a higher, more efficient Rn. For example, we could do ail our flying on a cool day in Death Valley below sea level where the air density is high. Another way is to fly faster - just as we do in a wind to get better lift and control to avoid the ground. This will hurt us in general, since most judges like to see a fairly slow pattern to give them time to write down the scores, evaluate the maneuver and lake a sip of soda or whatever.

The third practical way is to increase the wing chord. This increases the Rn effectively and will let the plane fly a little better. To oversimplify the whole deal, in aircraft design, the bigger the better for efficiency. Besides, a judge is accustomed to seeing little bitty things fly by - when this monster roars by, you are sure to have his attention.

The second factor, large span, is probably the most important of the three items. In our planes we are interested in performance characteristics - smooth level flight with no tendency to hunt, and high lift capability to get us through the corners. Smooth flight is largely a function of CG location and can be adjusted by proper balancing of the plane. Lift is increased primarily by the addition of wing flaps and also by the simple expedient of increasing span..."

Quote: "Steve, Attached is a plan for a Semi-scale stunter Called the Marut. Designed by Ron Adams it appeared in American Aircraft Modeler in Oct 71. Keep up the good work."

Article, thanks to pit. 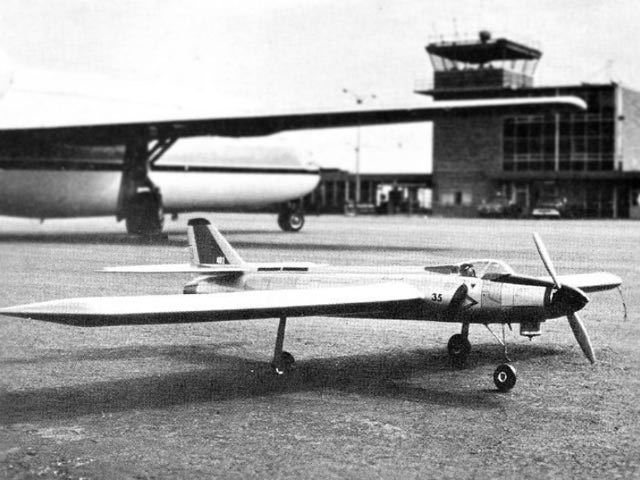