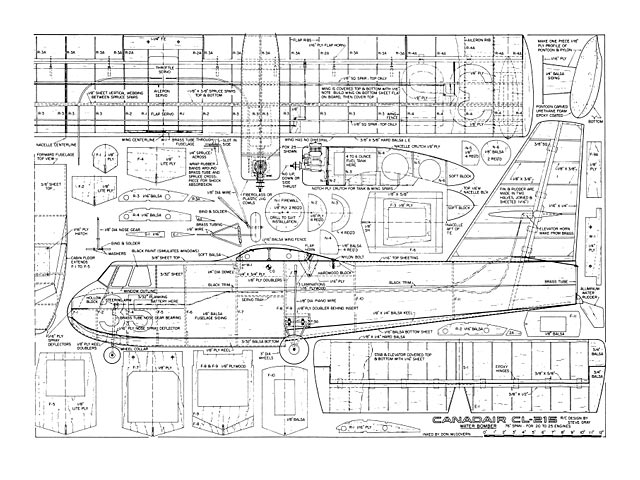 The Canadair CL-215 model is a twin engine, scale, amphibious aircraft that's easy to build, unique in appearance, and stable in flight. The model was originally designed around a couple of O.S. Max 20s, which were just sitting idle in one corner of the workshop. Some quick figuring resulted in a scale of 1/15 original size and produced a model with a wingspan of just over 6 ft. The model was only intended to be built as a sport standoff scale aircraft, but the lines and proportions of the full-size plane lent themselves well to modeling, and none of the proportions had to be adjusted to insure good flight characteristics. The result is a good flying sport scale model with exact scale outlines and airfoils.

The CL-215 aircraft, made by the Canadair Aircraft Company in Montreal, is all-Canadian designed and built. It was developed to incorporate the most desirable features to make it the most effective fire-fighting aircraft in the world, with secondary capabilities to spray insecticide, search and rescue, transport cargo to remote areas, and do survey work.

In its waterbombing configuration, the CL-215 is designed to scoop up six tons of water from a lake or river as it taxies along the surface. It then flies over the forest fire and dumps its entire load over an area of 350 x 40 feet in less than one second; this circuit is repeated as often as necessary to control the fire. During fire-fighting operations, several instances have been recorded of more than 100 drops being made by one CL-215 in a single day, Most of the CL-215s are in use in Canada, but several have been sold to France, Greece and Spain. Each year these aircraft save many times their cost in valuable natural resources and lives.

The full-size CL-215 is powered by two Pratt and Whitney R-2800-CA13 2100 HP radial engines, driving three-blade hydromatic constant-speed propellers. The aircraft is of conventional aluminum alloy construction, with special attention being paid to protecting the structure from corrosion. The landing gear is retractable and hydraulically operated. with the main gear folding up to the sides of the fuselage and the cantering nosewheel folding rearward into the hull. The tip floats are fixed.

This model is highly recommended to anyone wishing to try a twin for the first time; it is fairly simple and quick to build, and is extremely stable in the air due in part to its large vertical fin. Another feature of the model is the thick, flat-bottomed airfoil that makes for good slow-flying characteristics and slow smooth landings. Two of these models were built in spare time in the space of eight weeks, which attests to the claims of quick building time and ease of construction (the prototype model crashed on its sixth flight due to a radio failure and a duplicate was quickly built to replace it). The model's outlines were not altered front the original's and all surface areas have proven to be perfectly adequate.

Construction. The model is constructed primarily of balsa, and most building methods employed are simple and orthodox. I will, however, discuss some aspects of construction so as to clarify the grey areas beforehand. Remember to use waterproof glues throughout if you will be flying off water.

The fuselage is constructed by cutting out all the formers, the two fuselage sides, the cabin floor, and the forward keel. Contact cement F-8 and F-9 together, and score the fuselage sides vertically from the wing saddle to the bottom of the hull right at the step. This will allow the fuselage sides to be cracked when they are pulled together at the tail. Glue F-6, F-7, and F-8/9 between the fuselage sides with epoxy. At the same time, glue and clamp the tail together..." 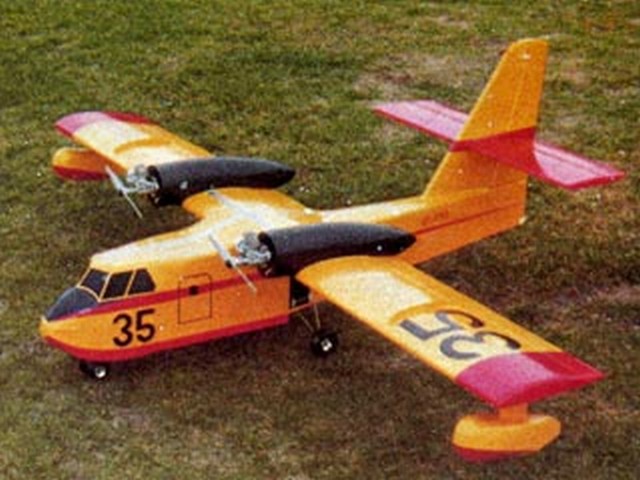