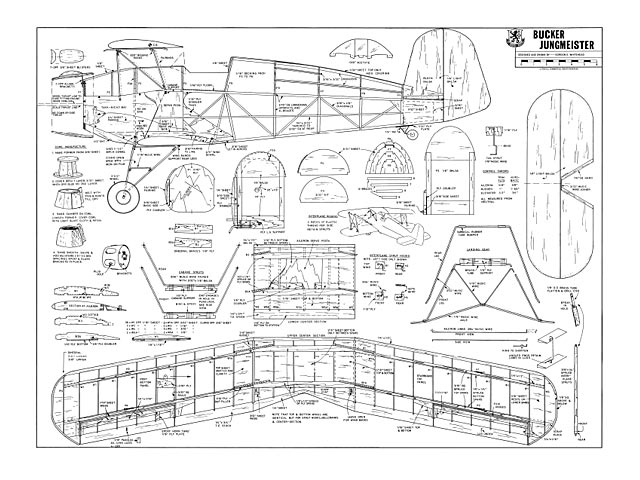 Quote: "Ask any pilot of any of the modern full size machines such as Zlins, Pitts, Caps, Akrostars: Which is the nicest flying aeroplane of them all? Bucker Jungmeister by Gorden E Whitehead.

In most aviation magazine articles featuring the Jungmeister, one tends to find that the only photos showing the ship upright are those where it's parked or the ground. The rest depict somebody holding his machine in some incredible attitude, such as 3 ft from the runway in knife-edge flight or passing inverted under a 20' fthigh limbo ribbon! So you might draw the conclusion that here is a machine with promise. And you wouldn't be mistaken!

The model featured here is the 6th in my line of small size classic bipes. With her I've expanded my acrobatic repertoire, to include such evil sounding maneuvers as the Lomcovak, Chinese Loop and Avalanche, and the 'bestest' snap-roll you ever did see. She'll snap-roll upwards, downwards, upright and inverted and, in this respect, she is very much like the full-size - only she rotates so quickly I have difficulty in stopping her with exact precision. Powered by a .25, she has the usual Whitehead design characteristic of unimpressive vertical climb performance (a feature of the full-size ship. I might add). However, she'll knife-edge with .20 or .25 power.

As with most of my chosen subjects, the Jungmeister has been on my list for years - 20 in fact! What delayed proceedings, apart from radio technology, was a fear of making special radial cowls. The method used produces a composite balsa/fiberglass affair which you can make and finish in a couple of evenings.

The model started life with a fully castoring tail wheel, and with that device she became a fully castoring model airplane! I always say that whenever you build a fresh scale model, you learn something new, and the message here is to forget about using castoring tail wheels, unless you love worn wing tips and viscious ground loops. After learning this the hard ay, I read an article in the British 'Pilot' magazine by the late Neil Williams, who described Jungmeister ground handling technique; although the tail wheel was of the castoring type, it was lockable for take-off and landing. I had previously thought that only carrier fighters needed this safeguard.

I relocated the front LG leg top mounting further forward than scale, to enable it to pivot in the fuselage. The lower wing bands support the rear leg and, because of the forward rake of the LG, provide a fair amount of shock absorbtion; when you push down on the ship, the wheels swing forward and upward, stretching the bands. Though seemingly crude, this arrangement works well, but you need one wing band either side which doesn't overlap the L.G. leg, in case all the LG. bands break. I faired the L.G. legs with Solarfilm, employing the solvent for adhesion. T, believe that, as with the Pitts SI. the L.G. fairing helps with lift in the knife-edge position.

The nicest feature of the ship, apart from the range of flamboyant colour schemes available, is her docile, smooth and slowish performance. You can trim her to fly free-flight, and no matter what she is doing autorotatively, like snaps or Lomcovaks, as soon as you release the sticks (yes, just let go!) she'll immediately stop rotating, or at least not go more than an extra half-turn. Then if you have the height, you can rescue her! Also, because of her low maximum speed, you can perform all kinds of combination maneuvers and sequences in a small space. A favourite sequence of mine is a half upward roll with a stall turn, followed by a 1-1/2 outside snap-roll on the way down, leading at full power into a reverse Cuban 8, another stall turn followed by a slow roll, a climbing 180 deg turn with a dive into a long, low knife-edge, then a half Cuban and a Lomcovak - and so on.

Phew! Mind you, I'm used to her now, and I find that, compared with my other designs, I tend to keep full power on for a far higher proportion of the flight. This isn't because she's underpowered. In fact, with the HB .25 or Webra Speed .20, she has the same power/weight ratio as the full-size ship. No, it is entirely due to the style of flying, in that you need to keep storing energy in the form of speed or height. As usual, I'll describe trimming and aerobatic performance (with examples) at the end, and will now get to the constructional details.

Fuselage: The basic sides are 3/16 sheet back to F4, continuing with a box girder. After adding ply doublers, join the sides with and F3 and F5, and the rear cabane supports. Join the rear posts, and add cross braces. Then add Fl and the front cabane support. When dry, add the front 1/4 in sheet fairing pieces, clamping as shown in the photos..."

Update 01/04/2015: Replaced this plan with a clearer copy, thanks to Balsaworkbench and theshadow. 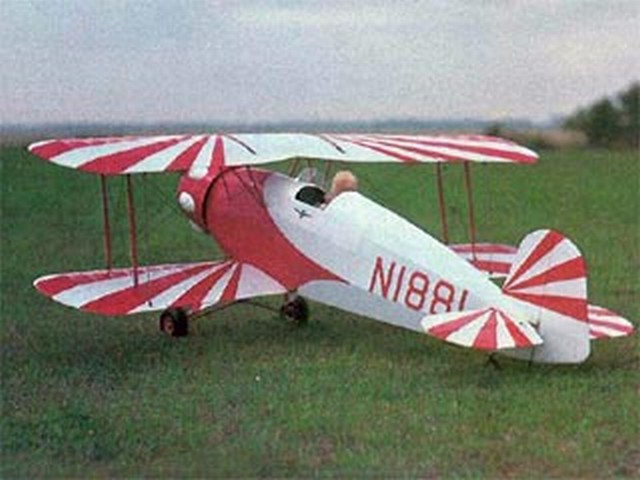